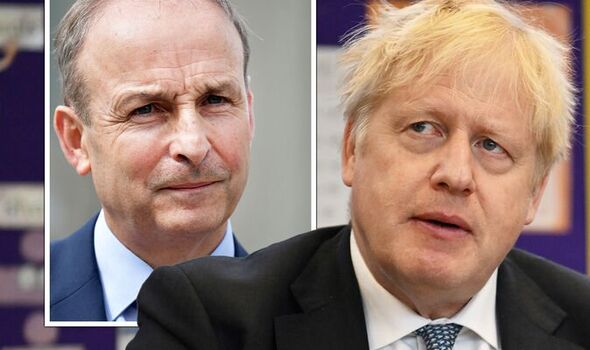 The Prime Minister warned that the situation surrounding the Protocol is “now very serious” as he blamed Brussels for failing to tackle the disruption being caused in the province.

His warnings, made in a call with Irish Taoiseach Micheal Martin, came amid concerns that the European Commission’s current proposals could see everyday goods disappear from supermarket shelves.

Ministers say that Brussels’ existing plans for the Protocol mean Lincolnshire sausages and other chilled meats from Great Britain would need a veterinary certificate to enter Northern Ireland.

Food originating from outside the EU, such as Thai Green Curry ready meals, New Zealand Lamb and Brazilian pork could also become unavailable.

Excess red tape would also mean delays for sending a parcel to Northern Ireland and there would be powers to search people’s bags for food, like ham sandwiches, on departure from the ferry to the province.

Pet owners would also need to pay up to £280 for certificates and jabs for their pets just to go on holiday in the UK.

Worryingly, seed potatoes would continue to be banned from entering NI from the rest of the UK – severely impacting the Irish potato industry.

The historic result of last week’s Northern Ireland Assembly elections has heaped pressure on both the UK and EU to come up with a solution to their ongoing dispute.

The DUP, who have now been replaced by nationalist Sinn Fein as the largest party at Stormont, have confirmed they won’t re-enter a powersharing administration in Northern Ireland without “decisive action” on the post-Brexit trade rules.

In his phone call with Mr Martin, Downing Street said both Mr Johnson and his Irish counterpart agreed on the “vital importance” of restoring devolved government in Northern Ireland.

As well as his condemnation of EU efforts to reach a compromise, the PM also reiterated his warning that the UK could act alone if a deal isn’t reached.

“The Prime Minister made clear that the situation in respect of the Northern Ireland Protocol was now very serious,” No.10 said.

“The balance of the Good Friday Agreement was being undermined and the recent elections had further demonstrated that the Protocol was not sustainable in its current form.

“Despite repeated efforts by the UK Government over many months to fix the Protocol, including those sections related to the movement of goods and governance, the European Commission had not taken the steps necessary to help address the economic and political disruption on the ground.

The Prime Minister reiterated that the UK Government would take action to protect peace and political stability in Northern Ireland if solutions could not be found.”

Following the dramatic developments at Stormont, Foreign Secretary Liz Truss is now understood to be preparing to unveil legislation that could “fix” key parts of the Protocol.

The action could be announced next Tuesday, although she is expected to hold talks with the Commission’s vice president Maro Sefcovic in the coming days.

Officials have reportedly drawn up draft legislation to unilaterally remove the need for checks on all goods being sent from Britain for use in Northern Ireland.

The law would also ensure businesses in Northern Ireland are able to disregard EU rules and regulations and remove the power of the European Court of Justice to rule on issues relating to the region.

Importantly, the Bill would override the protocol agreed by Mr Johnson in 2019 and mean the UK had breached its obligations under the Brexit agreement.

Ms Truss said: “The current EU proposals fail to properly address the real issues affecting Northern Ireland and in some cases would take us backward.

“Prices have risen, trade is being badly disrupted, and the people of Northern Ireland are subject to different laws and taxes than those over the Irish Sea, which has left them without an Executive and poses a threat to peace and stability.”

“The answer cannot be more checks, paperwork and disruption. Our preference has always been for a negotiated solution but will not shy away from taking action to stabilise the situation in Northern Ireland if solutions cannot be found.”

But Mr Sefcovic said renegotiation of the protocol was “not an option”, and that unilateral action by the UK would make work on possible solutions “more difficult”.

“The EU has been open to joint work with the UK on implementing the protocol to bring long-term legal certainty and predictability to the people and businesses in Northern Ireland,” he said.

“The EU remains open to such discussions. Only joint solutions will work. Unilateral action by the UK would only make our work on possible solutions more difficult.

“The protocol, as a cornerstone of the Withdrawal Agreement, is an international agreement. Its renegotiation is not an option. The European Union is united in this position.”