Brexit: Michael Gove says it’s ‘in EU’s interest’ to get a deal

Chancellor of the Duchy of Lancaster, Michael Gove, was forced to explain the Government’s Brexit progress and what concessions have been made on the Northern Ireland border issue. Niall Paterson of Sky News argued that, although there may be limited checks, Boris Johnson said that there would be no checks whatsoever between Northern Ireland and Great Britain. This comes after the British Government agreed to remove some of the more controversial elements of the Internal Market Bill after an agreement was met with the EU.

Mr Paterson said: “It does very much look down a border down the Irish Sea.

“There will be checks between Great Britain and Northern Ireland.

“Wasn’t it Boris Johnson who said ‘over my dead body would there be a border in the Irish Sea?'”

Mr Gove denied there being a border and explained how checks of goods would happen post-Brexit.

DON’T MISS: John Redwood rages at Lamberts on demand Britain must back down 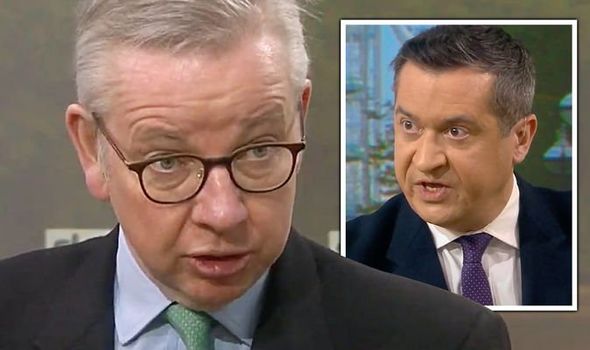 He argued that he did not believe that there would be a border down that Irish Sea and the Sky News host then asked where the checks of goods would be taking place.