Brexit: UK 'has got its freedom' says James Dyson

Cheifs from the European Parliament’s foreign affairs and international trade committees endorsed the UK-EU Trade and Cooperation Agreement in the penultimate vote on the treaty. German MEP Bernd Lange, the institution’s trade chief, said a date hadn’t been set for a final vote on the pact because of “mistrust” in the British Government. Brussels is furious that Downing Street moved to unilaterally scrap EU trade checks on goods being sent from mainland Britain to Northern Ireland.

Mr Lange said: “At the moment there is a lot of discussion about mistrust towards the British Government, specifically regarding the unwillingness to implement the necessary steps in the Northern Ireland Protocol.”

He added: “This is a historic vote in our committee today, but it’s totally clear that at the moment there is no date fixed for voting.

“There’s a reason behind that. We want to see clear commitments for the fulfilment of the protocol.”

The UK-EU future relationship treaty is provisionally applied, allowing both sides to benefit from quota and tariff-free trade. 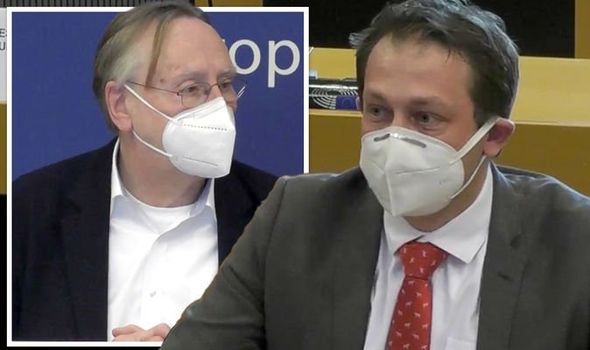 This period expires at the end of the month and MEPs must vote in favour, in a full plenary session, to allow the pact to enter fully into force.

Luxembourg MEP Christophe Hansen, a parliamentary Brexit negotiator, warned if the deal isn’t endorsed by the EU side it would result in a new no deal cliff edge.

He said: “I am today recommending that our two committees give positive votes on the TCA as a first step towards possible ratification in plenary.

“A positive vote for the TCA means increased legal certainty for companies that are operating under very difficult circumstances these days, with supply chains affected by Brexit, and, of course, by the pandemic.

“Plunging our companies into renewed uncertainty would be irresponsible and definitely in nobodies interest – we should not allow this opportunity to arise.”

MEPs have already once put off finally ratifying the deal, with Downing Street granting extra time for the EU to complete its formalities.

Mr Hansen added: “It has been made clear that the UK will not agree on a second prorogation.”

The EU Parliamnet’s Conference of Presidents – the body of its leaders – are expected to set a date for the final vote next week.

Sources say it will likely take place at the April 26-29 plenary session.