European Commission vice-president Valdis Dombrovskis said the bloc is now in the “final push” to secure a trade and security agreement with Britain. He refused to comment on any pending deadlines, insisting the only remaining cut-off point is the end of the transition period on December 31. Mr Dombrovskis said: “Michel Barnier updated us on the state of play of Brexit negotiations.

“The negotiations are currently ongoing with great intensity because we are now in the final push to reach agreement and from the Commission side we continue to work with this aim to reach agreement although there are still important elements to be resolved.

“There’s still substantial work to do. I will not start putting specific deadlines this week next week.

“We have seen many deadlines come and go but there’s one deadline which we’ll not be able to move January 1.

“One can say indeed we are now in the last moments to reach this agreement.” 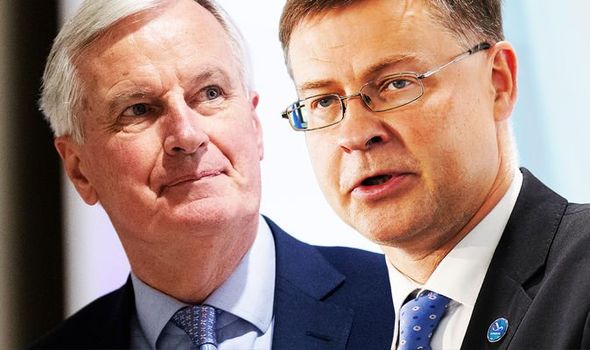 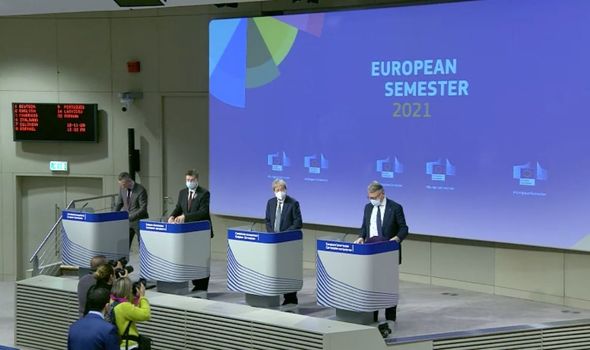 His intervention came after plans emerged for EU leaders to issue a no-deal Brexit challenge to Boris Johnson.

They will issue ‘strong words’ that they are ‘within days’ of the wrangling over the future relationship failing.

After their crunch video conference call on Thursday, they will signal it is now time for the bloc to be “operating in a no-deal scenario”.

A diplomatic source told Express.co.uk: “You can expect some strong words from leaders that the EU will be within days of operating in a no-deal scenario and the Commission has been tasked to activate contingency planning.”

Mr Barnier and Lord Frost, the Prime Minister’s chief negotiator, are currently locked in talks over the future relationship pact.

Progress has been blocked by disagreements over post-Brexit fishing rights and common standards, including state aid rules.

One EU official described the last months’ intensive talks as “Groundhog Day” for the bloc.

While progress has been made drafting a joint legal text in areas where both sides are in agreement, they have been unable to find solutions on the most contentious issues.

Mr Johnson has warned the Cabinet it is “far from certain” a Brexit trade deal will be struck.

The Prime Minister said the UK is working hard to secure an agreement but will not surrender to demands from Brussels to give up huge access to fishing waters.

He hold senior ministers that Britain will “thrive” even if the talks collapse.

Mr Johnson’s spokesman said: “The PM said that his position hasn’t changed.The UK is keen to secure a deal with the EU but not at the cost of our core principles around sovereignty and control over our laws, borders, money – and our fish.

“We are working hard to find solutions which fully respect UK sovereignty but it is far from certain that an agreement will prove possible and time is now very short.

“The PM said that if we cannot find suitable compromises with our European friends, we will leave the transition period on Australia-style terms on January 1.”