Brexit: David Davis urges Boris to 'not be bullied' by EU

The two negotiating teams remain locked in talks over a Free Trade Agreement (FTA) with little progress seemingly being made with less than four weeks to go until the end of the transition period. The EU’s chief Brexit negotiator Mr Barnier is briefing the bloc’s ambassadors this morning before yet another round of intense negotiations with the UK being. Tony Connelly, Europe Editor for RTE in Ireland, has claimed the EU is attempting to make a breakthrough on the issue of fishing as time runs out to get a deal over the line but added the two sides still remain significantly apart.

He tweeted: “On fish, both sides are far apart, but it sounds like the UK wants the EU to jump first before it, in turn, shows flexibility.

“The UK is offering a three-year phase-in but with an upfront payment of €300m in demersal fish (ie, out of the €650m EU boats catch in UK waters)

“Then each year after the phase-in there would be a link between EU boats getting access and a hand over of stock. 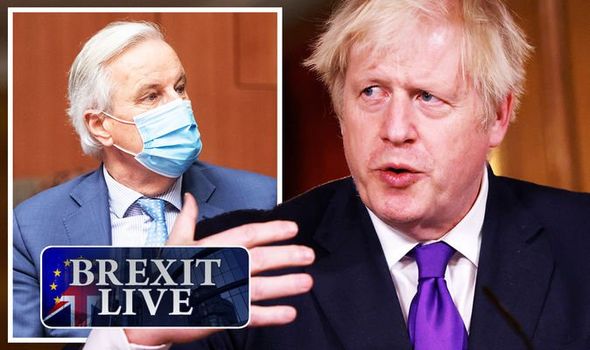 “The EU is proposing a 10-year phase-in, at which point EU fleets would forego 18 percent of the value of what they catch now in UK waters. Then there would be a review. The UK is said to be insisting on 80 percent.

“Source says both sides are so far apart that meeting somewhere between 18 percent and 80 percent would not work. Access seems to be the battleground.

“This is where the UK is wielding the sovereignty tool: deciding who has access to your waters will satisfy that sense of new found sovereignty

“The UK approach appears to be: we cannot start talking about access until we know how much fish quota EU boats will have in order to utilise that access. And if the Commission doesn’t move from 18pc then we can’t have that conversation

“I’m told the UK will show flexibility on the €300m and access if the Commission makes that first move; on the EU side there is still the option of linking UK access to the EU’s lucrative energy market in exchange for fisheries access.”

8am update: ‘Businesses need answers, and they need them now!’

Adam Marshall, director general at the British Chambers of Commerce, said: “With just weeks to go, businesses need answers, and they need them now.

“Posters and television adverts are no substitute for the clear, detailed and actionable information businesses require to prepare for the end of transition.

“None of the issues businesses are grappling with are new, they have all been raised repeatedly over the past four years.”

“We welcome the fact that UK and EU leaders are still talking, as the overwhelming majority of businesses want the two sides to reach an agreement.

“If a breakthrough happens over the coming hours and days, the two sides must immediately set to work on pragmatic steps to smooth the introduction of the new arrangements from January.”

Andrew Bridgen tweeted: “As I have said, the fish issue was always a red herring in the trade negotiations, apparent EU concessions now on fish are designed to put pressure on the UK to concede on the level playing field, what the EU always wanted.

“We are being gamed and must stand firm on this red line.”