The Prime Minister met with European Commission President Ursula von der Leyen on Wednesday in an attempt to reach an agreement but their discussions ended in deadlock. Now Mr Johnson has made it clear he hopes to win the backing if the two most important leaders in the EU27 rather than the bloc’s nominal head of government. Mr Johnson said last night: “What I’ve said to our negotiators is that we’ve got to keep going, and we’ll go the extra mile, and we will.

He said: “At the moment, I have to tell you in all candour that the treaty is not there yet and that is the strong view of our Cabinet as well.”

Key sticking points include “equivalence”, which he said would keep the UK “locked” in the bloc’s regulatory orbit, and fisheries, which he said under current proposals would mean “we wouldn’t still have control of our waters”, he stressed.

The EU has already initiated no-deal plans for emergency legal agreements to keep planes flying to the UK and lorries crossing Europe.

After their meeting, Mr Johnson and Ms von der Leyen agreed a decision on the future of the negotiations will be taken by the end of Sunday. 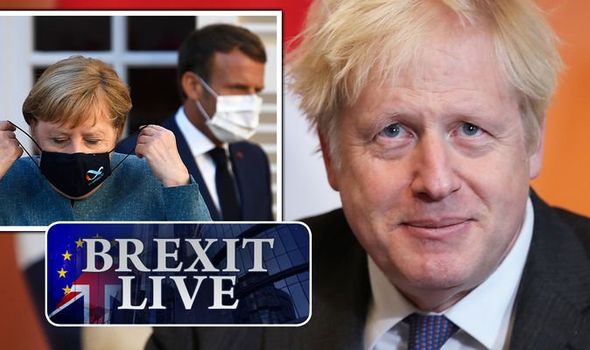 Negotiations are “difficult”, Ms von der Leyen said at a Brussels summit, where she is poised to update EU leaders on the state of play.

If Mr Johnson gets his wish, it would likely be seen as a bid to cut EU negotiator Michel Barnier out of the picture – something suggested by Lee Rotherham, Director of Special Projects at Vote Leave, in September.

Mr Rotherham told Express.co.uk: “My take is someone needs to step in and remove Barnier.

“He is actually very clued up. He is not a eurosceptic but he understands euroscepticism.

“The biggest error the EU made was putting Barnier in charge and not Timmermans.” 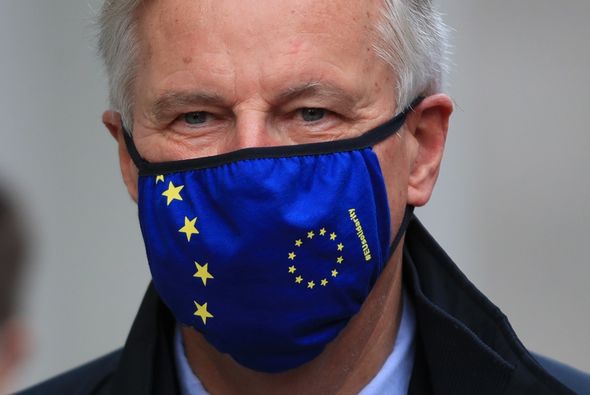 Ms Sturgeon said: “I think the chances of a deal now are almost vanishingly small. They’re not non-existent, and I remain hopeful I guess, because no-deal would be catastrophic.

“But I’m starting to worry not just that no-deal is now the overwhelming likelihood, but that Boris Johnson is actually now almost planning for that.”

7.59am update: Britain doesn’t need a trade deal to make a success of Brexit, insists Dowden

Boris Johnson wants to get a Brexit trade deal and there is a still a chance of getting one – but the Prime Minister will not back down on the two main outstanding issues, Culture Secretary Oliver Dowden has insisted.

Mr Dowden told Sky News: “Still, I think, there is a significant possibility that we could get that deal. “We’re pretty much 90 percent of the way there.

“There are these two areas which are outstanding and which no reasonable British prime minister could accept.

Mr Dowden also reiterated the point that Sunday is now the final deadline for a deal being wrapped up.

7.56am update: Angela Merkel blasted by for driving EU talks ‘to brink of failure’

German chancellor Angela Merkel has been criticised for failing to intervene personally in ongoing Brexit trade talks bringing them “to the brink of failure”.

On Thursday Boris Johnson warned there is a “strong possibility” the UK will fail to agree a new trade deal with the EU. If followed an inconclusive meeting between the Prime Minister and European Commission President Ursula von der Leyen on Wednesday.

However, writing in the German Spiegel magazine reporter Michael Sauga called on Ms Merkel to step in.

The journalist argued EU leaders had been mistaken in attempting to reverse the Brexit referendum result when it was clear this wouldn’t succeed and suggested the German chancellor holds some responsibility for the talks success.

Arch-Brexiteer John Redwood has said Brussels is rattled and making “idle threats” – and called on it to take care of its citizens instead.

“Time to look after its citizens and companies who want to trade easily with an independent U.K.

British and EU negotiators have reached a “crunch point” with just 72 hours to clinch a trade agreement, the European Parliament’s Brexit chief has warned.

David McAllister said it would become clear whether the European Union and Britain can overcome their differences and reach a free trade agreement by the end of the week.

Speaking to Express.co.uk, the German MEP, who is a close ally of Angela Merkel, said he was prepared to let the negotiations go down to the wire if it produced a successful outcome.

He insisted the EU Parliament was ready to be “creative and pragmatic” when it comes to rubber-stamping a draft legal text for approval.