The Indian Health Service had a problem.

Fed up with substandard care, one of the two pueblos whose federal funding helped support the health service’s Acoma-Cañoncito-Laguna hospital in Acoma Pueblo, N.M., decided to take its share of the hospital’s budget and start its own independently run clinic. But doing so left the I.H.S. short of money for the hospital.

In effect, the health service was caught between the desire of one constituency to take control of its own health care and the need of another to keep a well-established hospital operating. In the end, it slashed services at the hospital in November, closing its inpatient critical care unit, women’s services and emergency room.

Of 135 full-time employees, 76 would be cut. A hospital that had been in operation since the mid-1970s and was serving 9,100 mostly poor tribal citizens would be reduced to only providing primary care on weekdays and only until 4:30 p.m., according to a document obtained by The New York Times. Urgent care services had been offered all week from 8 a.m. to 10 p.m. since the closing of the emergency room, but starting Thursday, such services were available 24 hours a day.

The I.H.S. said it did not start the sequence of events that resulted in the cutbacks. But the changes nonetheless affect two tribes lacking full access to health care in the middle of a pandemic. And critics of the service said it fit into a larger pattern of managerial and financial problems that have focused new attention on its ability to deliver adequate care to some of the nation’s most vulnerable populations.

The hospital, 60 miles west of Albuquerque, has served three tribes, and the two that remain reliant on it say they were blindsided by the decision and felt abandoned by the federal government during an acute public health crisis. Members of Congress — notably Representative Deb Haaland, Democrat of New Mexico and President-elect Joseph R. Biden Jr.’s choice to be interior secretary — say they intend to investigate.

The Acoma-Cañoncito-Laguna hospital is federally funded, and federal law requires a year’s advance notice to Congress before closing one of these facilities. The agency says it did not notify Congress about the hospital changes because it was only a reduction of services.

The closing of the hospital facilities comes as coronavirus cases rise across the state and hospital beds dwindle, forcing the leader of one of the tribes served by the hospital, Gov. Brian D. Vallo of the Pueblo of Acoma, to declare a state of emergency.

“Their facility, the A.C.L. hospital, is turning away patients and telling them to sit in their cars and call the local E.M.S. to transport them to Albuquerque if they can’t drive themselves,” Mr. Vallo said. 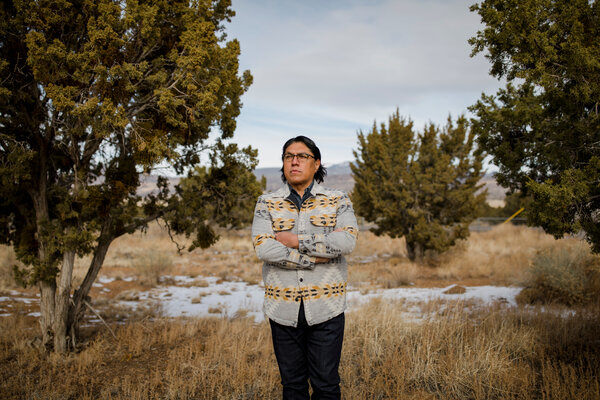 Dr. Leonard Thomas, the Indian Health Service director for the Albuquerque area, said it was not hospital policy for patients to be told to wait in the parking lot for emergency care. He said the agency had requested more information on the situation but had yet to receive it.

“If a patient comes to the urgent care clinic but is in need of emergency care, they will be stabilized and transferred to an emergency department at another facility for appropriate care,” he said.

Yolanda Sanshu, 45, has lived on the Pueblo of Acoma reservation all her life, and she and her five children received most of their health care services from the Acoma-Cañoncito-Laguna hospital.

Now, Ms. Sanshu’s best option for health care is an hour away in Albuquerque. But she said she feared that the Indian Health Service would not cover medical bills from appointments or hospital visits outside the service’s system, a common problem.

“I honestly don’t know where we are supposed to go for health issues and our dental issues anymore,” Ms. Sanshu said. “I’m scared to reach out to other hospitals because I don’t have health insurance.”

The reduction of services at the Acoma-Cañoncito-Laguna service unit is just the latest installment of a series of longstanding issues between the nation’s tribal governments and the federal agency responsible for providing them health care.

The pandemic has exacerbated the Indian Health Service’s decades-long weaknesses and has contributed to disproportionately high infections and death rates among Native Americans. The Albuquerque service area has a seven-day rolling positivity rate of about 14 percent, compared with 7 percent for New Mexico and about 8 percent nationwide.

The hospital is federally run by the Indian Health Service, based in Rockville, Md. The agency was created to carry out the government’s treaty obligations to provide health care services to eligible American Indians and Alaskan Natives.

Situated 60 miles west of Albuquerque, the Acoma-Cañoncito-Laguna Service Unit serves about 126,000 patients a year. Before scaling back its services, it had 25 inpatient beds and served around 9,100 tribal citizens from the surrounding tribes. The hospital has been in operation since the mid-1970s and provided inpatient and outpatient care, along with dental, optometry, pharmaceutical and medical emergency services.

Coronavirus cases for the Acoma Pueblo, which has about 3,000 citizens, have spiked recently, including 100 in early November after zero reported cases in September.

The office in the Albuquerque area is one of I.H.S.’s 12 service regions and serves 20 Pueblos, two Apache bands, three Navajo chapters and two Ute tribes across four southwest states. There are five hospitals, 11 health centers and 12 field clinics serving the residents of the area.

Wendy Sarracino, 57, a community health representative for the Acoma people, said that when her son broke his leg, she had to stop at two hospital before he could receive the care he needed. At the time of his injury, the Acoma-Cañoncito-Laguna service unit hospital had already closed for the day so Ms. Sarracino drove her son 45 minutes to Grants.

“That was kind of our lifeline,” Ms. Sarracino said of the hospital. “We didn’t have to go very far for health care. An awareness needs to be made that people do live in rural New Mexico and we need health care.”

Greg Smith, a lobbyist for the Pueblo of Acoma, said 30 doctors and nurses have either quit or retired from the hospital since the announcement, fearing they would end up unemployed.

“From a public health standpoint, how does it make any sense to close a 24-hour facility that is serving a vulnerable population during a global pandemic and effectively replace it with two daytime clinics?” he asked.

Ms. Haaland said the Trump administration made an irresponsible decision in closing the hospital in Acoma during a pandemic. Ms. Haaland said she intended to look into the I.H.S.’s decision and expected answers from the federal government.

“This pandemic does not discriminate and its toll in communities of color has revealed the longstanding disparities that exist in Indian Country,” Ms. Haaland said in a statement. “This administration is putting lives in danger and needlessly increasing patients’ and families’ distress.”

The Indian Health Service said the reduction in services at the hospital was prompted by a decision by the neighboring Pueblo of Laguna — one of the three communities served by the hospital — to redirect its share of the federal money supporting the hospital to a new clinic it intends to operate on its own. A growing number of tribes, fed up with what they say is poor care, are trying to take control of their own health care rather than entrusting it to the I.H.S. and are permitted under some circumstances by a 1975 law to do so.

The decision, Dr. Thomas said, led the agency to notify its employees at the hospital of potential layoffs. When some employees, concerned about being laid off, decided to leave on their own, the hospital could no longer safely provide emergency and inpatient services, he said.

Dr. Thomas said the agency requested an extension of the removal of the tribe’s financial shares in the hospital given the pandemic but Laguna denied that request. “We’re doing everything we can to maintain all services for the tribal communities,” he said. “We take it very seriously and want to make sure we’re there for the patients.”

Gov. Wilfred Herrera Jr. of the Pueblo of Laguna disputed the suggestion that his community was responsible for the closing of the hospital and its emergency room. He said the Indian Health Service’s inability to adequately staff the hospital prompted its closing.

Mr. Herrera said the people of Laguna had long been frustrated with the care they received from the hospital. In 2015, the Pueblo created the Laguna Health Care Corporation, a nonprofit corporation to build and operate a high-quality health clinic for the Laguna community, and submitted a proposal to divert its share of the hospital funding to the new clinic.

Mr. Herrera said an arrangement was negotiated with the Indian Health Service to assure that full services at the hospital would remain available until February.

“During the negotiation process, I.H.S. never informed Laguna that hospital and emergency room closures at A.C.L. were imminent or that an extension in opening Laguna’s clinic was needed to prevent such closures,” he said.

It has always been difficult for I.H.S. to attract doctors and nurses to its facilities, many of which are in isolated areas. In the Albuquerque area, the overall job vacancy rate of the health system is 25 percent for doctors and 38 percent for nurses. The announcement that the hospital would be downsized to a clinic made it harder to hold on to health professionals and attract new ones.

Last year, Zelda Seymour, 47, was told she had colon cancer and she said she believed that if it had not been for the care her doctor coordinated at the Acoma-Cañoncito-Laguna hospital, she would be dead. Ms. Seymour’s doctor is one of the few to remain there after dozens of medical workers left following the announcement of the reduction of services.

Ms. Seymour said she feared what would happen to her and the rest of the tribe if those staff members continued to flee the hospital. The future of the tribe depends on the community regaining the services it lost, she said.

“There’s already so much loss that we have to deal with in term of the unavailability of goods and services because we live on the reservation,” she said, “so basically we are fighting to keep whatever we can because at this point the health of our community isn’t great enough to sustain itself on it own.”