The measure, which would include money to address climate change, expand Medicare and fulfill other Democratic priorities, is intended to deliver on President Biden’s economic proposal. 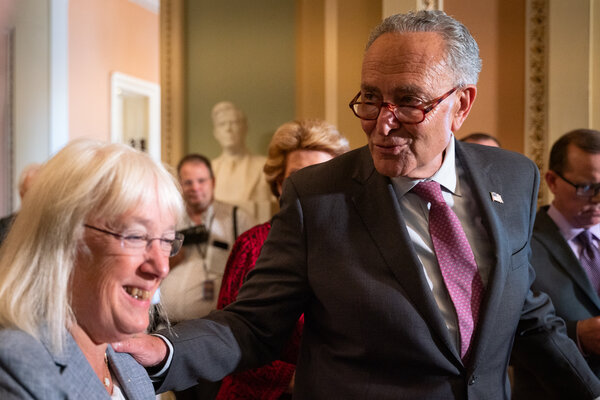 WASHINGTON — Top Democrats announced on Tuesday evening that they had reached agreement on an expansive $3.5 trillion budget blueprint, including plans to pour money into addressing climate change and expanding Medicare among an array of other Democratic priorities, that they plan to advance alongside a bipartisan infrastructure deal.

Combined with nearly $600 billion in new spending on physical infrastructure contained in the bipartisan plan, which omits many of Democrats’ highest ambitions, the measure is intended to deliver on President Biden’s $4 trillion economic proposal. The budget blueprint, expected to be dominated by spending, tax increases and programs that Republicans oppose, would pave the way for a Democrats-only bill that leaders plan to push through Congress using a process known as reconciliation, which shields it from a filibuster.

To push the package — and the reconciliation bill that follows — through the evenly divided Senate, Democrats will have to hold together every member of their party and the independents aligned with them over what promises to be unified Republican opposition. It was not clear if all 50 lawmakers in the Democratic caucus had signed off the blueprint, which is considerably smaller than the $6 trillion some progressives had proposed but larger than some moderates had envisioned.

Mr. Biden was set to attend lunch on Wednesday with Democrats, his first in-person lunch with the caucus since taking office, to rally the party around the plan and kick off the effort to turn it into a transformative liberal package. The blueprint, and subsequent bill, will also have to clear the House, where Democrats hold a razor-thin margin.

The agreement, reached among Senator Chuck Schumer of New York, the majority leader, and the 11 senators who caucus with the Democrats on the Budget Committee, came after a second consecutive day of meetings that stretched late into the evening. Louisa Terrell, Mr. Biden’s head of legislative affairs, and Brian Deese, his National Economic Council director, were also present for the meeting.