Downing Street missed the deadline set by the European Commission to respond to its letter outlining the legal challenge in the row over the Government’s Brexit Bill. Commission chief Ursula von der Leyen said the Internal Market Bill, which gives ministers the power to rip up sections of last year’s Withdrawal Agreement, was in breach of the divorce treaty. The German eurocrat gave Mr Johnson until the end of October to amend the legislation or respond to the bloc’s concerns.

A Commission spokesman said: “The EU has received no reply from the UK therefore we’re considering next steps, including issuing a reasoned opinion.

“This dispute will have to be resolved.”

Mrs von der Leyen is now expected to send a formal notice to demand Britain complies with EU law in the next two months. 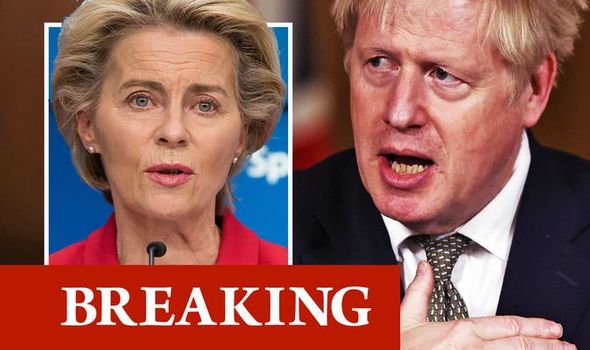 Last month she said triggered the bloc’s infringement proceedings after the government failed to “remove the problematic parts” of the legislation.

She added: “This draft Bill is, by its very nature, a breach of the obligation of good faith laid down in the Withdrawal Agreement.

“Moreover, if adopted as is it will be in full contradiction of the protocol on Ireland/Northern Ireland.”