The inaugural address has historically been used to set the agenda for a president’s term and reassure Americans in times of crisis. Here are some of the more famous presidential inaugural addresses, and what they said about the state of the nation when they were given.

Abraham Lincoln, 1861 — “The better angels of our nature”

President Lincoln took office on March 4, 1861, with the United States on the brink of civil war. By the time of his inauguration, seven states had already seceded from the Union and formed the Confederacy to preserve the institution of slavery in the South. The Civil War would begin in earnest a month later, with the Confederate attack on Fort Sumter.

In a final appeal to quell the secession crisis, Lincoln’s inaugural address balanced a conciliatory tone — with Lincoln vowing that he would not “interfere with the institution of slavery in the states where it exists” — with the declaration that any state’s secession from the Union was “legally void” and the pledge that violence against the federal government would be considered an insurrection.

The dual nature of Lincoln’s address is apparent in his closing statement, warning the seceding states against an armed conflict while appealing to their shared heritage as Americans.

In your hands, my dissatisfied fellow-countrymen, and not in mine, is the momentous issue of civil war. The Government will not assail you. You can have no conflict without being yourselves the aggressors. You have no oath registered in heaven to destroy the Government, while I shall have the most solemn one to “preserve, protect, and defend it.”

I am loath to close. We are not enemies, but friends. We must not be enemies. Though passion may have strained it must not break our bonds of affection. The mystic chords of memory, stretching from every battlefield and patriot grave to every living heart and hearthstone all over this broad land, will yet swell the chorus of the Union, when again touched, as surely they will be, by the better angels of our nature. 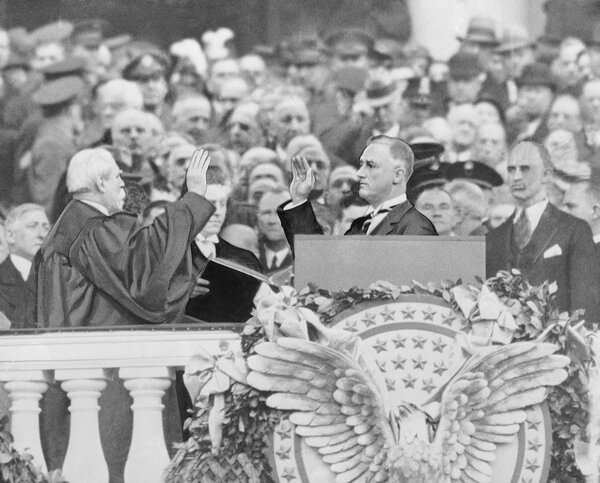 President Roosevelt began his presidency with the country in the depths of the Great Depression, the worst economic crisis in American history, as unemployment peaked at 25 percent. Roosevelt had been swept to a landslide victory against the incumbent president, Herbert Hoover, and used that popular mandate to announce swift and decisive action to address the crisis.

Roosevelt also used the bully pulpit to criticize those he held responsible for the failures in the economy: big business and the banks — “through their own stubbornness and their own incompetence” — and his predecessor in the Oval Office, of whom the speech was “implicit with criticism.”