WASHINGTON — In a private meeting at the White House on Tuesday, President Biden renewed the promise he made to the family of George Floyd just hours after a Minneapolis police officer was convicted of murder in his death.

Mr. Biden vowed in April to pass a police reform bill in his name, promising justice not only for Mr. Floyd but for a nation still reeling from a year of killings and protests.

He made a fresh commitment during the White House meeting even as Mr. Biden acknowledged that he had missed a self-imposed deadline of having the bill signed by the first anniversary of Mr. Floyd’s death, which fell on Tuesday.

“He said of the deadline, he’s not happy about it not being met, but all in all he just wants the bill to be right,” Brandon Williams, a nephew of Mr. Floyd, told reporters outside the White House after the meeting with Mr. Biden and Vice President Kamala Harris.

In a speech to Congress last month, the president used the emotional power of Mr. Floyd’s death, and the national movement it helped inspire, to urge lawmakers to pass the George Floyd Justice in Policing Act by May 25. It was, Mr. Biden implored Democrats and Republicans, a moment to “bend the arc of the moral universe toward justice, real justice.”

But Washington missed the moment.

The legislation bearing Mr. Floyd’s name — which would ban the use of chokeholds, impose restrictions on deadly force and make it easier to prosecute officers for wrongdoing — has languished in Congress as lawmakers spar over a series of issues, including a measure that would alter a legal shield known as qualified immunity that protects police officers in brutality cases.

Though both sides say they are optimistic that a deal may still be possible in the weeks ahead, the stalemate is a reminder for Mr. Biden of the limits of presidential power, and of the deepening lack of any real bipartisanship in the nation’s capital, even in the face of the largest racial justice protests in generations.

“To deliver real change, we must have accountability when law enforcement officers violate their oaths, and we need to build lasting trust between the vast majority of the men and women who wear the badge honorably and the communities they are sworn to serve and protect,” Mr. Biden said in a statement after his meeting with the Floyd family. “We can and must have both accountability and trust and in our justice system.”

Mr. Biden later told reporters that he was “hopeful that after Memorial Day” there may be deal.

A now-famous video of the killing of Mr. Floyd in Minneapolis, which showed the officer, Derek Chauvin, kneeling on his neck for nine minutes and 29 seconds, accelerated a nationwide racial reckoning against police brutality and fueled demands for justice and policing reform.

Across the nation on Tuesday, people used the anniversary of the killing as an opportunity to celebrate Mr. Floyd’s life and to renew calls for change.

A small group of demonstrators marched through downtown New York City, denouncing police misconduct and brutality and calling for further investment in Black communities. In Minneapolis, people gathered in George Floyd Square, where he was killed, and others met in a downtown park for an event honoring Mr. Floyd “through Black culture, art, history and support of local businesses.”

Marches and vigils took place in Los Angeles, Chicago, Philadelphia, Atlanta and several other cities. Before arriving at the White House, Mr. Floyd’s family made stops with key lawmakers on Capitol Hill, including Speaker Nancy Pelosi, who renewed her party’s commitment to getting a bill signed into law.

Mr. Biden met with the family in the Oval Office for over an hour for a private discussion, closed to the press. Among those who attended were Gianna Floyd, Mr. Floyd’s young daughter; Roxie Washington, Gianna’s mother; Philonise, Rodney and Terrence Floyd, his brothers; and Mr. Williams.

They characterized the meeting with Mr. Biden as a personal check-in with a family he has gotten to know over the past year.

“He genuinely wanted to know exactly how we were doing,” Mr. Williams said.

After the meeting, Mr. Biden said Mr. Floyd’s relatives had shown “extraordinary courage” and called the conviction of Mr. Chauvin a “step forward toward justice” for Mr. Floyd.

“But our progress can’t stop there,” he added.

Still, advocates for change said they were frustrated that not enough had been done to prevent the police killings that spurred the racial justice protests last year.

“One year after George Floyd, little has changed on the ground,” said Udi Ofer, the director of the justice division for the American Civil Liberties Union. “Communities of color continue to be patrolled by a massively funded and heavily armed police force that disproportionately stops arrests, jails and kills people of color.”

The Biden administration has announced “pattern or practice” investigations of police departments in Louisville and Minneapolis, which are intended to examine excessive force, biased policing and other misconduct by officers. The investigations usually precede a court-ordered settlement known as a consent decree between the federal government and local police departments. 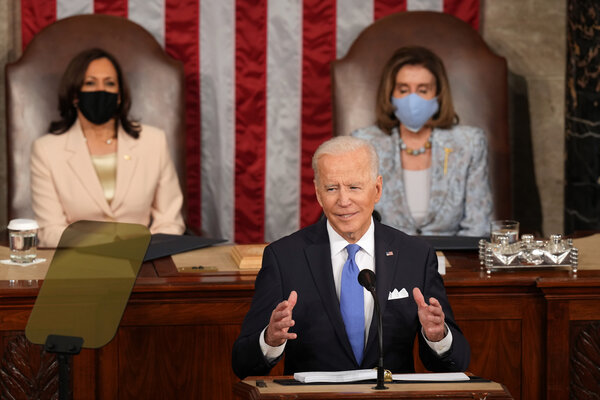 But the consent decrees are not a panacea for reforming police departments, criminal justice advocates say. They argue that real change will only come about through legislation.

“It doesn’t address some of the most fundamental issues when it comes to policing communities that communities are calling for when it comes to reimagining policing,” said Jonathan Smith, who was the chief of the special litigation section in the Justice Department’s civil rights division.

On Capitol Hill, a bipartisan group of senators and House members who have been meeting multiple times a week since the Chauvin verdict insist that they can still reach a deal in the weeks ahead. Three Black lawmakers at the center of the talks — two Democrats, one Republican — negotiated through the weekend and issued a rare joint statement saying that the events of a year ago had “awakened millions of people around the world” to the crisis in policing.

“We are a lot closer,” said Senator Cory Booker, a New Jersey Democrat who met over the weekend with his two main counterparts, Representative Karen Bass, Democrat of California, and Senator Tim Scott, Republican of South Carolina.

People involved in the talks say the two sides are close to agreement on many issues, but remain at odds over two of Democrats’ top priorities, which are fiercely opposed by powerful police unions: making it easier to punish officer misconduct by lowering the standard for criminal prosecution and limiting qualified immunity for officers in civil courts. Mr. Scott and the swath of Republicans they represent are pushing for an approach that would maintain a shield around individual officers but shift the burdens of their misconduct onto their departments.

A year later, much of that momentum has slowed. Crucially, Republicans believe the politics surrounding race and policing have flipped, especially among their core supporters. In conservative circles, last summer’s reform movement gave way to a sharp rhetorical backlash in the fall, when Republican candidates found a powerful campaign message in “Blue lives matter” and accused Democrats of trying to defund police departments. Many of those messages have now become party orthodoxy, making any action viewed as hostile to the police a risk for Republicans and a potential lifeline to Democrats.