Home » How the Capitol Riot Suspects Are Challenging the Charges

Three months after the attack on the Capitol, the frantic federal effort to prosecute the members of the mob that stormed the building has started shifting gears.

After a nationwide flurry of arrests, defense lawyers are homing in on what they describe as fundamental weaknesses in the government’s case.

Some have challenged the marquee indictments against members of the Oath Keepers militia and the far-right group the Proud Boys, saying that the evidence so far does not support claims that their clients conspired to plan an attack against Congress.

Others have complained about prosecutors’ use of an unlawful entry statute and a 1960s-era law intended to silence leaders like the Rev. Dr. Martin Luther King Jr. And at least one lawyer has filed a motion to move her client’s case out of Washington, saying it will be impossible to get a fair trial in the city where the insurrection occurred.

Still others have questioned the relevance of a federal obstruction law used to charge dozens of people, saying that it does not technically cover a proceeding like the certification of the presidential vote.

“The statutes being used don’t always describe what actually happened at the Capitol,” said Gregory T. Hunter, who has represented several people charged in connection with the riot. “I don’t think that anyone foresaw, when they wrote these laws, that they would be meant for a violent mob willing to do damage and stop Congress from doing its job.”

While the F.B.I. opened several hundred investigations in the wake of the attack, prosecutors have charged about 400 people so far, suggesting that the government has not been simply sweeping up trespassers and charging them with crimes. A Justice Department spokesman declined to comment on the cases beyond what is in the public record.

Perhaps the most difficult part of the prosecution has been deciding which charges accurately describe an underlying crime that has no real precedent. While many of the 400 people charged are certain to plead guilty, others plan to fight. And without a legal guidepost, prosecutors have sometimes seemed to reach.

They have, for instance, charged many defendants with aiding and abetting but not fully explained who they helped or precisely what they did. One prosecutor made a novel legal argument last week, suggesting in court that a rioter had “corralled” a segment of the crowd into storming the Capitol and thus had turned the mob itself into a weapon.

“The Capitol attack was, thankfully, an unprecedented event,” said Aitan Goelman, a former federal prosecutor who helped try Timothy McVeigh, the Oklahoma City bomber. “But that means you’re not going to have any blueprint cases to know how — or what — to charge.”

From the start, prosecutors have run into an overarching problem: The attack against the Capitol was committed by a mob, but justice is supposed to be meted out on an individual level. 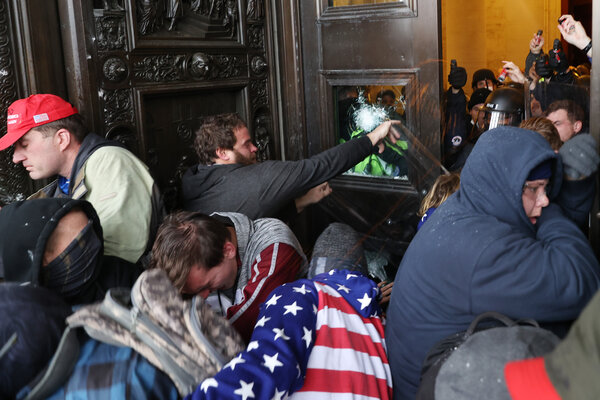 It was clear almost immediately that not everyone who broke into the building would be charged with identical offenses. Some attacked the police with flagpoles, hockey sticks, crutches and bear spray. Others showed up primed for battle in helmets, tactical vests, gas masks and goggles.

But many simply walked into the building, breaking nothing, hurting no one and giving no sign that they had planned anything.

In a recent ruling, the federal appeals court that oversees the Capitol cases took note of these distinctions, saying that even though the “violent breach” was “a grave danger to our democracy,” it was still important to stick to the “facts and circumstances of each case.”

“Those who actually assaulted police officers and broke through windows, doors and barricades, and those who aided, conspired with, planned or coordinated such actions,” the court wrote, “are in a different category of dangerousness than those who cheered on the violence or entered the Capitol after others cleared the way.”

At this stage of what is shaping up to be a marathon legal process, the government’s most prominent cases have been filed against the Oath Keepers, a militia that recruits former military and law enforcement officers, and the Proud Boys, an organization of leftist-hating brawlers that slyly bills itself as defending “Western” values.

Prosecutors have repeatedly said an array of electronic communications — Facebook messages, online meeting room chats and conversations on a digital walkie-talkie app — show that the groups conspired not only internally to storm the Capitol, but may also have coordinated with each other.

But now that the government is turning over evidence, lawyers for the extremist groups have attacked these theories of conspiracy, and judges have showed signs they agree.

Lawyers for the Oath Keepers, for instance, claim that the evidence shows that many of the dozen militia members now facing charges didn’t go to Washington with a plan to storm the Capitol, but went instead to protect high-profile Republicans like Roger J. Stone Jr., the onetime adviser to former President Donald J. Trump.

Lawyers for the Proud Boys assert that the group’s internal chats show that members had not planned to assault the Capitol, but had merely prepared to defend themselves against the leftist protesters with whom they had sparred at previous rallies in the city in November and December.

Other legal issues in other cases present a more systemic threat.

A lawyer for a Texas winemaker, Christopher Grider, filed a motion late last month to dismiss one of the charges he is facing: obstruction of a government proceeding. If Mr. Grider’s motion succeeds, it could have a chilling, even crippling, effect on dozens of cases against defendants facing similar charges.

The law in question, which carries a penalty of 20 years in prison, makes it illegal to interfere with an official proceeding related to the “administration of justice,” Mr. Grider’s lawyer, Brent Mayr, wrote. It was meant to stop people from obstructing with matters like a criminal or congressional investigation, but was not intended to cover proceedings like the certification of a presidential vote, a largely ministerial event, Mr. Mayr argued.

Prosecutors have opposed the claim and the issue will be argued at a hearing next month in front of Judge Ketanji Brown Jackson of Federal District Court in Washington. Several defense lawyers have said they are eager to see which way Judge Jackson rules.

At the end of last week, lawyers for Couy Griffin, the founder of a group called Cowboys for Trump, filed papers questioning another charge, one that almost every Capitol rioter is facing: unlawfully entering a restricted area.

Mr. Griffin’s lawyers argued that, technically, such areas are defined by protective boundaries established by the Secret Service, which, they pointed out, does not protect the Capitol. Even though Vice President Mike Pence was in the building on Jan. 6, he was rushed out of the Senate shortly after the riot erupted. That leaves open the question of whether the Secret Service lines — and thus the legal trigger for unlawful entry — remained in place after Mr. Pence left.

(Still, scores of the people charged with unlawfully entering a restricted area have also been charged with a separate crime more narrowly tailored to the Capitol: disorderly conduct in a Capitol building.)

Another common charge that is expected to be challenged is a civil rights-era law that makes it illegal to interfere with law enforcement officers performing their duties “during the commission of a civil disorder.” Initially proposed by segregationists to hamper the civil rights movement, the law was dusted off last year by the authorities in Portland, Ore., who used it to charge left-wing protesters involved in the attacks against the city’s federal courthouse.

One of the Portland protesters filed a motion two months ago attacking the law as unconstitutional, saying that, among other things, it violated First Amendment protections and exceeded the limits of the Constitution’s commerce clause. Depending on how on the judge in Oregon rules, there could be similar motions seeking to invalidate the use of the law in the Capitol riot cases.

Yet another defense strategy emerged this month when lawyers for Jenny Cudd, a Texas florist, asked a judge for permission to move her trial from Washington. The lawyer, Marina Medvin, noted that after Jan. 6. the city’s liberal electorate was barraged by media accounts describing rioters like her client as “white supremacists” who had launched a “domestic terror attack.”

“The jury who would hear the facts in Washington, D.C.,” Ms. Medvin wrote, “is the most politically prejudiced jury in the entire country.”

Several lawyers said privately that they were mulling similar requests.

Should that happen, they are likely to get something like the response Ms. Cudd got from the prosecutors who suggested that perhaps she was not as infamous as she thought.

“Given the sheer number of people involved in the Capitol attack,” they wrote, “it is unlikely that more than a handful of D.C. residents could identify Cudd by name.