The SNP Westminster leader accused the Prime Minister of failing to follow scientific advice on the coronavirus two-metre rule as the Cabinet is reviewing the measure to potentially half it to one metre. Mr Blackford warned the British public is growing tired and mistrusting of the Government’s guidance on COVID, but Boris Johnson immediately dismantled his claim.

The Prime Minister said: “The people of this country are overwhelmingly following the guidance that this Government gives.

“And tomorrow, the House will be hearing more about what’s happening with NHS test and trace.

“They will find an extraordinary degree of natural compliance, natural understanding of the British people.

“In spite of all the obscurantism and myth-making that we’ve heard from the parties opposite.” 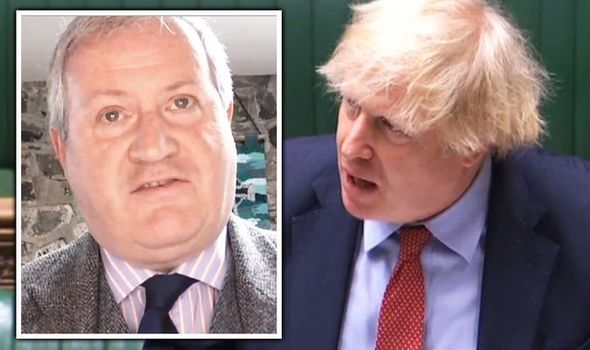 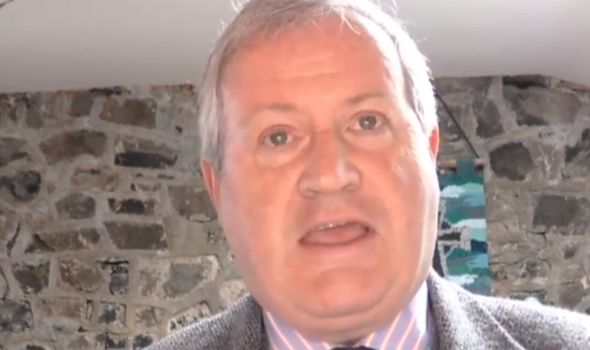 Mr Blackford challenged the Prime Minister on the science of reducing the two-metre rule.

He said: “We know that the Cabinet has discussed reducing the two-metre social distancing rule but that’s not the experts’ advice right now.

“Sage reported that being exposed to the virus for six-seconds at one metre is the same as being exposed for one minute at two metres.

“That is a significant increase in risk.”

Mr Johnson replied: “There are all sorts of views about the two-metre rule, he’s absolutely correct in what he says about the Sage advice.

“But clearly, as the incidence of the disease comes down, as I think members of Sage would confirm, the statistical likelihood of being infected – no matter how close or far you are from somebody who may or may not have coronavirus – goes down.”

“As we drive this disease down, as we get the incidence down, working together, I want to make sure we keep that two-metre rule under constant review.”

The Prime Minister also urged Sir Keir Starmer to encourage “his friends in the left-wing trade unions” to help get schools ready.

Sir Keir replied “let’s have this out” after the Prime Minister suggested he had already spoken to the Labour leader about his schools plan, adding: “The Prime Minister and I have never discussed our letter in any phone call – he knows it and I know it.

“The taskforce has never been the subject of a conversation between him and me one-to-one or in any other circumstance on the telephone. He knows it so please drop that.”

Sir Keir said the UK is the “outlier” compared to other countries in returning children to school, telling the Commons: “It’s no good the Prime Minister flailing around trying to blame others.”

He said the PM did not consult relevant parties or have scientific backing when he made his announcement on schools in May, also saying: “It’s time he took responsibility for his own failings. This mess was completely avoidable. The consequences are stark.”

Mr Johnson accused Sir Keir of being unsure over whether schools are not safe enough or should be reopened quicker, adding 37 percent of pupils in Year 6 at primary schools have returned and this is increasing.