As Democrats eye the Southern battleground, high turnout will be crucial for them, and that means persuading nonvoters to participate. But experts warn that changing electorates is hard and complicated. 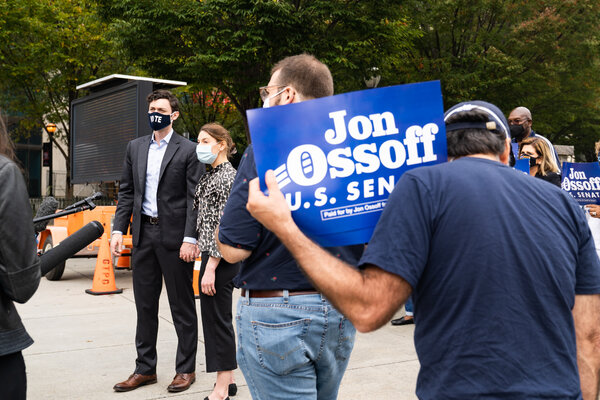 ATLANTA — Jon Ossoff may not have known it, but a possible key to victory in his Georgia Senate race had just pulled up beside him in a dingy black van.

Mr. Ossoff, a 33-year-old former journalist who is seen as one of Democrats’ brightest hopes in year when Georgia could be crucial for the battle of Senate control, was arriving at State Farm Arena in Atlanta this month to vote early. To his left, the van unloaded a gaggle of older Black men.

“First-time voters!” the driver yelled as two of the men, Richard Sanabria and Tony Lamar Jones, walked out.

His question should come as no surprise. Over 100 million eligible, voting-age Americans did not vote in 2016, more than the number who voted for either presidential candidate. In Georgia, about 60 percent of eligible voters cast a ballot in that year’s presidential race, roughly on par with the national figure of 55 percent.

As Democrats eye Georgia for possible gains this November — the first step toward a larger goal of remaking their path to victory in statewide races throughout the South — high turnout will be the name of the game, and that means persuading nonvoters to become voters.

In traditional swing states like Pennsylvania and Wisconsin, most political observers believe that turnout is largely fixed and that campaigns rise and fall based on their ability to persuade a set of voters. But in the new set of battleground states in the South, as well as Arizona in the Southwest, the priority is converting nonvoters into voters.

The thinking goes: If the party is able to reshape the electorate with new arrivals to the state — including young people, Latinos and Asian-Americans — as well as greater participation from Black residents and immigrants, a red state becomes a blue one.

But experts who study nonvoting populations and the failed Democratic campaigns of recent years warn that the work of changing electorates is hard and complicated. There is no such thing, they say, as an inevitable demographic destiny.

Nse Ufot, the executive director of the New Georgia Project, a nonpartisan group that has sought to turn out voters among the state’s new residents, said that doing so in a meaningful way could not happen with “five-minute conversations that you have on people’s porches.”

“It is a sustained campaign that requires smart targeting, messaging and research,” she said.

She added, “And when you think about the transactional nature of electoral campaigns, they prioritize getting people who are already voters to vote for them.”