The first lady was in Delano, Calif., to mark the birthday of César Chávez, the labor organizer who formed the country’s first successful farmworkers’ union. 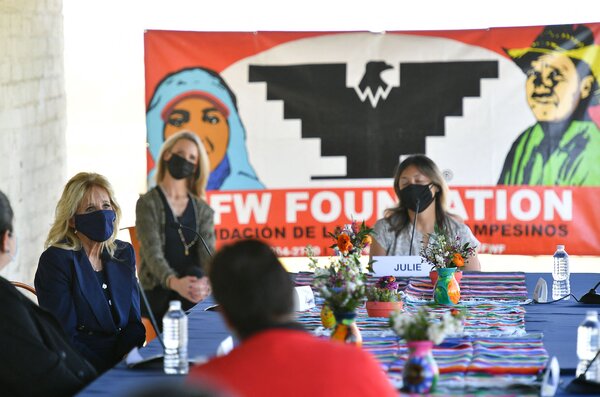 DELANO, Calif. — Jill Biden, the first lady, traveled to California on Wednesday to visit a pop-up vaccination site for farmworkers who have lobbied for priority access to shots during the pandemic.

In remarks to about 100 farmworkers and local politicians who had gathered to mark the birthday of César Chávez, the labor organizer who formed the country’s first successful farmworkers’ union, Dr. Biden told them that their work — and their health — had been essential to a nation crippled by the coronavirus.

“We depended on those who kept going to work every single day,” she told the crowd. “Without the farmworkers who kept harvesting our food, or the factory workers who packaged it, or the grocery store clerks who stocked our shelves, hey, we wouldn’t have made it through this year.”

It was the latest trip the first lady has made in service of the Biden administration’s political priorities, this time to maintain the president’s close ties to union workers who helped him win the election. When she arrived at the Forty Acres property outside Delano, a historic site that became the headquarters of the United Farm Workers of America, Dr. Biden was greeted by several members of Mr. Chávez’s family.

She also heard from a group of female farmworkers who picked grapes, citrus fruits and blueberries in nearby fields. Several asked the Biden administration to provide pathways to citizenship, protection from discrimination and stronger union representation.

“He is a union person. I am a member of the teachers’ union,” Dr. Biden said. “We are a union couple.”