Labour conference: Rosie Duffield appears at non-official fringe event in Brighton despite saying she was warned to stay away on security advice

A Labour MP who said she would not be attending the party’s conference in Brighton on security advice after allegedly getting threats has made an appearance at a rally in the city and criticised Sir Keir Starmer’s position on women’s rights.

Rosie Duffield has been criticised for her opposition to transgender women being able to access single-sex spaces such as domestic violence refuges, school toilets and prisons.

The Labour MP was reported to be staying away from the party’s gathering in Brighton due to online threats from transgender campaigners. 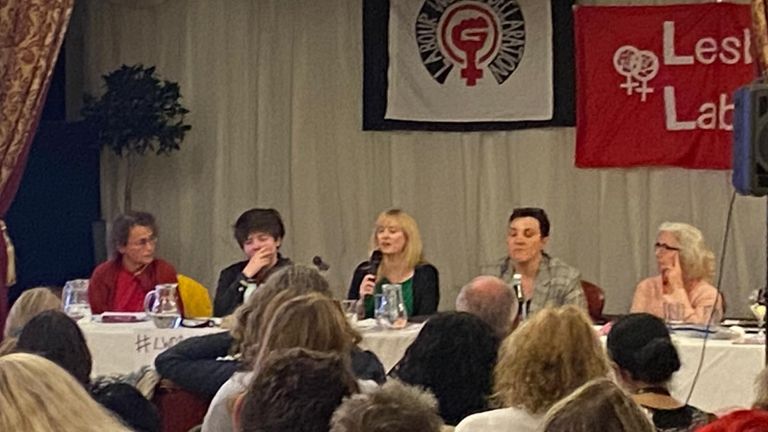 On Sunday, Sir Keir Starmer said Ms Duffield was wrong to say that “only women have a cervix” in a tweet last year.

But making an unexpected appearance at an unofficial fringe event on Tuesday evening, Ms Duffield called on the Labour leader to “clear up” where Labour stand on the matter and stood by her comments.

The MP for Canterbury told Sky News: “I feel like the Labour Party has to have some clear lines and Keir especially is, sort of, didn’t come across as particularly clear on that interview the other day.

“What women like me want is just a pledge that the single-sex exemptions will be kept in the 2010 Equality Act.

Asked if she would quit the party in the face of the criticism she has received, Ms Duffield said: “Absolutely not, no.” And pressed on whether she will keep voicing her opinions, the Labour MP added: “Yes, I mean, you know, someone has to, and me and my colleagues that are here tonight need a voice, need to speak to be able to speak up.

“Many thousands of women have been in touch with me, it is not a niche issue, and I know that some in the party want to bury their heads into the sand and say it is just a really niche, non-important issue – but it is one of the issues that people are talking about a lot at the moment and we need to clear up where we stand.”

Around 25 protesters gathered outside the venue of the event, which was not disclosed until soon before it started in order to protect Ms Duffield’s safety.

Security guards were also closely monitoring the hotel in which the rally took place and Ms Duffield confirmed to Sky News that she is “not doing conference” and is just attending “this one event” at The Old Ship Hotel on the Brighton seafront.

The Labour MP said she was asked to attend the event by friends and felt it was important to speak on the issue which “quite a few” other Labour MPs agree with her position on.

“Understandably, they are not necessarily ready to speak out.” Asked about the issue during an appearance on the BBC’s Andrew Marr Show, Sir Keir said there needed to be a “mature and respectful debate” around trans rights.

He said trans individuals are among the “most marginalised and abused communities”.

And on Ms Duffield, he declined to call her remarks transphobic, but added: “It is something that shouldn’t be said. It is not right.

“We do everybody a disservice when we reduce what is a really important issue to these exchanges on particular things that are said.”

Sir Keir added: “We need to have a mature, respectful debate about trans rights and we need to bear in mind that the trans community are amongst the most marginalised and abused communities, and wherever we’ve got to on the law, we need to go further.” Angela Rayner, Labour’s deputy leader, said it was a “concern” that Ms Duffield felt unable to travel to Brighton for conference and promised “robust” action against any party member who targets her.

“Rosie deserves our full support and protection against that and she would get that,” she told Sky’s Trevor Phillips on Sunday programme.

“If she had come to conference, we would have risk-assessed and made sure that she had every bit of support that she needed to be here.”