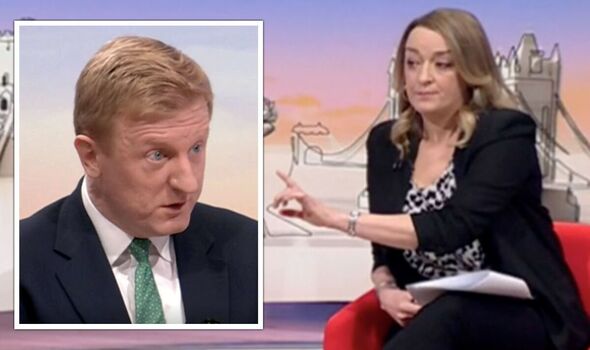 Cabinet minister Oliver Dowden has been left tongue-tied after the mathematics behind the Government’s evaluation of the cost of increasing the pay of public sector workers was picked apart by BBC’s Laura Keunssberg. In a tense exchange on the broadcaster’s Sunday morning show, Mr Dowden attempted to claim that to meet the demands of strikers would amount to a cost of £28 billion, paid for in part by households forking over £1000 each. But Ms Keunssberg pointed out that the projections made by Mr Downden were based on the level of inflation for one month, as opposed to an average, which is the standard means of calculating pay-rises in line with inflation, and that, consequently, the figures were a massive overestimation, possibly designed to discourage support for strikers.

Ms Keunssberg asked: “How have you worked out that it would cost households £1000 a year to give public sector workers an inflation-matching pay rise?”

Mr Downden said: “So, we have taken the level of inflation, which is currently at 10 or 11 percent, and we have projected that forward for next year, because that is what you would expect it to apply, and that would give £1000 for every family if we matched that for the public sector.”

Ms Keunssberg said: “Well, we have had a look at your numbers, as you’d expect, and we have asked the Treasury how they worked it out.  Now, your figures have used the level of inflation at 11 percent, which is just for one month.

“The Office for Budget Responsibility actually projects that inflation next year will be far less than that.

“That is not to mention the fact that  when you are normally working out pay negotiations, you work out an average of inflation, not just one month, which is what you have done.”

After a moment’s silence, Mr Dowden said: “Well, the requests from the striker’s unions across the board are generally about the Consumer Price Index (CPI) level of inflation. That is currently at between 10 and 11 percent.

“And actually, if you look in the case of nurses, they want Retail Price Index (RPI) plus five percent. Actually, that gives you 19 percent so you could actually argue that we are underestimating the number.”

Ms Keunssberg said: “If that is the case then, why have the independent number crunchers, the Institute for Fiscal Studies (IFS), come up with a figure of £14 billion as being the cost of doing this?

“The inflation numbers you are using are actually inaccurate and out of date. If you are talking about next year’s pay settlement, nobody expects inflation to be anything like [what you are suggesting] next year. For nurses and other strikers watching, this is about this year’s pay deal.”