Pentagon Weighs Proposal to Send Dozens of Troops Back to Somalia

The plan for a “train and assist” mission would partly reverse President Donald J. Trump’s withdrawal of nearly all American ground forces from the country. 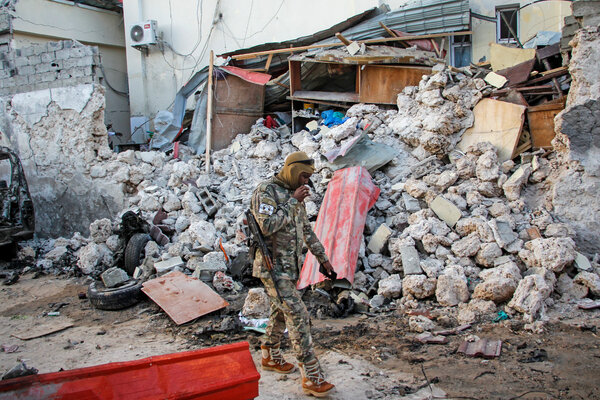 By Eric Schmitt and Charlie Savage

WASHINGTON — The Pentagon is developing a proposal to send dozens of Special Forces trainers back to Somalia to help local forces combat Al Shabab, the terrorist group affiliated with Al Qaeda — a step that would partly reverse President Donald J. Trump’s abrupt pullout of nearly all 700 American troops from the country in January.

Mr. Trump’s order to withdraw ground forces from Somalia underscored his desire to end long-running military engagements against Islamist insurgencies in dysfunctional states in Africa and the Middle East, a grinding mission of low-intensity warfare that has spread since the Sept. 11, 2001, attacks.

The desire by some military policymakers to return to Somalia offers a glimpse into the challenges the Pentagon could face in advising Afghan forces from a distance after carrying out President Biden’s order to withdraw the last 3,500 American troops from Afghanistan, especially if the Taliban then make serious gains there.

John F. Kirby, the Pentagon spokesman, declined to comment on the Somalia proposal.

The proposal has not yet been presented to Defense Secretary Lloyd J. Austin III, officials said, and it is not clear whether Mr. Biden would approve such a plan. Among other challenges, the idea is also running into an unresolved policy debate over developing new rules for counterterrorism “direct action” like drone strikes away from active war zones.

The Biden administration placed new limits on such strikes when it took office on Jan. 20, to give it time to develop a permanent policy. Where the Trump administration set broad rules for strikes in particular countries and delegated authority to commanders in the field about when to carry one out, proposals for strikes are now routed through the White House.

The White House has since rejected a handful of requests by the military’s Africa Command to carry out drone strikes against Shabab targets in Somalia because they did not meet the new standards, three American officials said. It tentatively approved other proposed operations, but conditions on the ground have not yet come together in a way that would allow them to proceed, they said.

As a result, nearly five months have passed since the United States has carried out any airstrikes in Somalia — a sudden and significant pause to a drone war there that stretched back to the Obama years. The cessation is offering an unfolding experiment in what it means to permit Islamist militants to operate with little intervention — and generating mounting impatience among military officials chafing at what they consider to be lost opportunities, officials said.