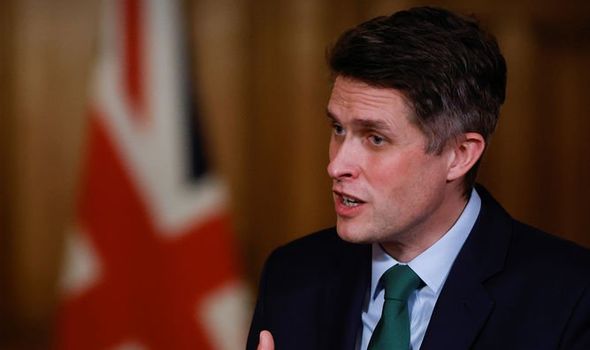 Ministers are said to be considering an overhaul to help restore faith in the exam system but the Education Secretary is tipped to be turfed out by Boris Johnson before then. He is at risk after two chaotic years and 2020’s exam farce.

Labour leader Sir Keir Starmer said that he should have been fired “a long time ago”.

Exams regulators insisted the process has been fair and thorough.

Staff submitted grades for more than half a million GCSE pupils this year, using evidence such as mock exams, course work and tests.

Some 61.2 percent of results were graded 7/A and above at England’s independent schools, compared with just 26.1 percent for comprehensives.

Ministers may replace A to E grades with a numerical system, to shore up the credibility of A-levels.

But Geoff Barton, the general secretary of the Association of School and College Leaders, said: “There is a legitimate question about what grade distribution at A-level should look like. It seems unnecessarily disruptive, however, to undertake an overhaul of the grading system itself to replace it with numbered grades or some other big change.

“A reform of this nature needs both a clear rationale and a lead-in period rather than landing it suddenly on students and teachers. It would be very unfair.”

Mr Williamson beat calls to quit over last year’s A-levels fiasco when an algorithm was used to “moderate” results but a U-turn followed protests. He was also criticised for confusion around returning to class in the pandemic.

Schools minister Nick Gibb called him “very effective” and defended how GCSEs were awarded, adding: “This was the best alternative to exams.”