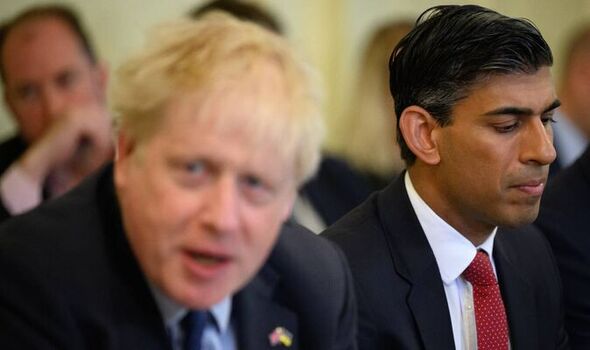 Gross domestic product was down 0.3 per cent in April, official figures revealed yesterday – despite experts having forecast a 0.1 per cent rise. The GDP fall comes amid millions of families struggling with soaring energy and fuel bills while everyday costs shoot up – with inflation hitting nine per cent.

The Confederation of British Industry, the country’s leading business group, warns households are facing the biggest squeeze since the 1950s and claims the UK is on the brink of recession.

But the Chancellor said countries around the world are seeing slowing growth and the UK is “not immune from these challenges”.

Mr Sunak added: “I want to reassure people we’re fully focused on growing the economy to address the cost of living in the longer term while supporting families and businesses with the immediate pressures they are facing.”

Boris Johnson blamed a global inflationary “bump” – but he risked inflaming Tory tensions by hinting further tax reducions to help address the crisis are unlikely to come before next year.

The Prime Minister suggested in a radio interview that people will need to wait until inflation begins to subside, which is not expected to happen until next year.

He added: “We’re bringing in tax cuts as fast as we can, but what we’ve also got to do is look after people in a tough time.

“There’s an inflationary spike we’ve got to get through, looking after people as we go through that, and that is what we are going to do.”

The grim figures could persuade the Bank of England to stop short of a 0.5 percentage point rise in interest rates this week, with 0.25 points now looking more likely to avoid choking growth further.

The CBI urges “vital action” in the coming months to boost business confidence.

Figures from the Office for National Statistics showed that GDP, a measure of the size of the economy, fell in April, with all three main sectors – raw materials, manufacturing and services – suffering a drop in output for the first time since January last year.

April’s month-on-month dip in GDP was also the biggest contraction in 15 months and follows a fall of 0.1 per cent in March.

The ONS said it marked the first time GDP has fallen for two months in a row since March and April 2020, when the pandemic sent the economy tumbling.

Samuel Tombs, from research group Pantheon Macroeconomics, is forecasting the economy to contract overall between April and June.

But he said: “A recession – two quarters of negative growth – remains unlikely.

“Households’ real disposable incomes should rise in both the third and fourth quarters now that the Chancellor has announced an extra £15billion in grants during these quarters.”