The UK’s vaccination programme is a “resoundingly powerful” argument for the benefits of the Union, the health secretary has said.

Matt Hancock told a Downing Street news conference on Monday the case for the union had been “undoubtedly strengthened” by the UK government’s efforts during the COVID-19 crisis.

Live COVID news from UK and around the world

A Panelbase survey for The Sunday Times found that 49% supported Scottish independence compared to 44% who favoured remaining in the UK.

Meanwhile, this weekend also saw the SNP publish an 11-point plan on how they intend to bring about another independence referendum.

However, asked about Scottish independence at Monday’s coronavirus briefing, Mr Hancock said: “The case for the union is undoubtedly strengthened by the work that we’ve done and shown how over this pandemic we’re stronger together as one United Kingdom.”

He described the vaccine rollout as “one example” of the benefits of the Union.

“We both invested in the science of this vaccine and bought the vaccines that we bought from international companies as a UK government for the whole of the UK,” Mr Hancock said.

“We’ve then rolled it out to all different parts of the UK through the NHS, including in the three devolved nations.

“As a result of this, other than Israel and the United Arab Emirates, we have the fastest vaccine rollout in the world.

“That’s a sign of what the UK can do when we pull together.” 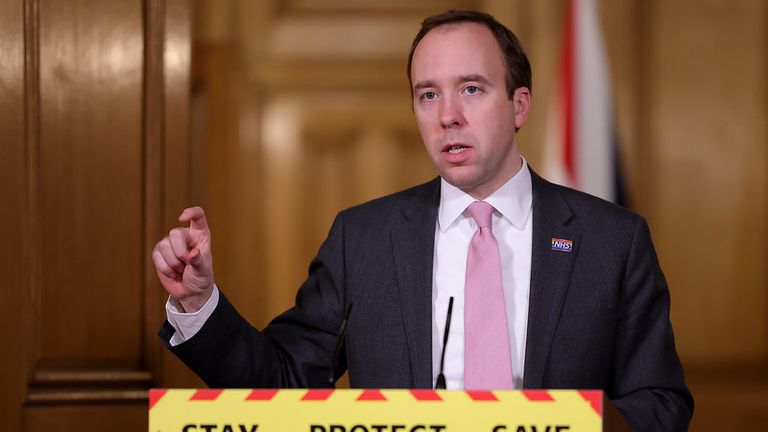 Mr Hancock added his message for those in Scotland considering the independence question was: “We’re so much stronger together.

“It means an awful lot to me and my English UK colleagues, in the UK government, that we are one Union that can pull together when things get difficult.

“That’s an argument that I think is resoundingly powerful – that this UK vaccine delivered by Welsh and Scottish and Northern Irish colleagues in the NHS, as well as, of course, all the way across England – that is a real example of this country firing on all cylinders”.

The health secretary also highlighted how, at the weekend, the Scottish Ambulance Service appealed for extra help and “ambulance services from the other nations stepped forward”.

“Our health systems across the UK routinely work closely together – offering support when it’s needed,” he said.

“From vaccines to ambulance services, and the UK is stronger together in the fight against this pandemic.”

The SNP criticised Mr Hancock for using the Downing Street news conference to outline his support for the Union.

A party spokesman said: “COVID briefings should be for important public health information only and overtly political statements very much risk diluting the strength of these crucial health messages.

“But the fact the Tories feel the need to try and use this crisis to try and make constitutional arguments shows how deeply rattled they are by the opinion polls, which say independence is clearly becoming the settled will of the people of Scotland.”

Boris Johnson is reported to be planning a visit to Scotland this week to make the case against the break-up of the UK.

Earlier on Monday, the prime minister also hailed the vaccination programme as among “the visible benefits of our wonderful Union”.

But he refused to say if he would mount a legal challenge to a second Scottish independence referendum, if Ms Sturgeon presses ahead with a vote without the UK government’s agreement.