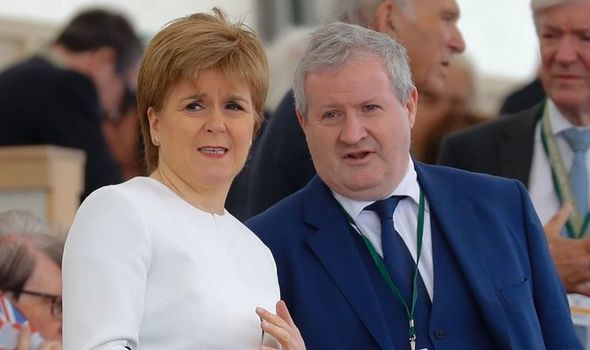 Ian Blackford, the SNP’s leader in Westminster, said the deal represented an “extreme Tory Brexit” and would have a long-term impact on the economy. He said the deal would have disastrous consequences for Scotland.

Mr Blackford said: “Boris Johnson’s extreme Tory Brexit is an unforgivable act of economic vandalism and gross stupidity, which will cause lasting damage to the economy and leave the UK much worse off at the worst possible time – during a pandemic and economic recession.

“With the Labour Party lining up behind Boris Johnson, it is clear Westminster will impose this hard Tory Brexit regardless of how Scotland votes, but it is not being done in our name.

“It is a disaster for Scotland.”

SNP MP Neil Gray tweeted: “Along with @theSNP colleagues I will vote against Boris Johnson’s awful Brexit deal on Wednesday.

“And we are absolutely clear why: it’s a bad deal for Scotland and Scotland didn’t vote for it.”

The SNP posted a message on Twitter saying: “Scotland’s future should be in Scotland’s hands, not those of Boris Johnson.”

The party used the conversation to turn the focus on a second independence referendum.

They added: “Scotland can choose a better future as an independent, European country. But only if we vote for it.”

The announcement comes after the SNP’s parliamentary group met earlier today to discuss their strategy.

MPs will be called back to Parliament on Wednesday for a special sitting to debate over and vote on the deal.

The session, which will come during the lawmakers’ Christmas break, will kick off at 9.30am.