Starmer pledges biggest ever transfer of power under Labour 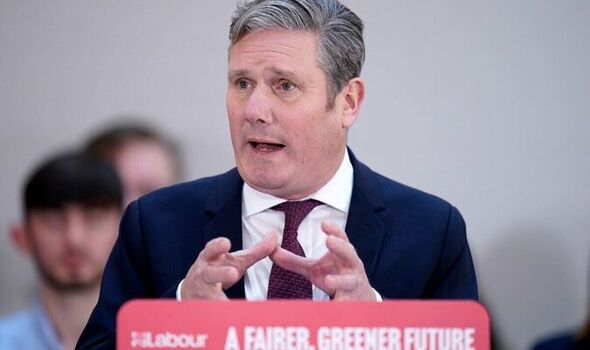 Sir Keir Starmer has laid out Labour’s plan for sweeping constitutional reform, saying that the party will introduce the “biggest ever transfer of power from Westminster to the British people”. Giving a speech at the launch of the Commission on the UK’s Future in Leeds, Sir Keir claimed the centre of power in Britain “has not delivered”.

He added: “Anyone can see what is happening in the UK today. We have an unbalanced economy.

“One which makes too little use of the talents of too few people in too few places. And which the Tories have dragged into a vicious cycle of low growth and high taxes.

“Faced with this narrow path of stagnation, is it any surprise that people up and down the country are crying out for a new approach?”

He said that Labour will “reignite our economy”, adding: “If Labour wins the next election – Britain will see a change not just in who governs, but how we are governed.”

Sir Keir continued: “The tools to a fairer society and a stronger economy placed directly in the hands of working people. So together we can build an economy not just for the many, but by the many and of the many.

He pledged that local bodies would have “new powers over skills, transport, planning and culture”, which he said woul help to “drive growth by developing hundreds of clusters of economic activity”.

The party leader also promised to “rebuild trust” in politics by “reforming the centre of government, cleaning up sleaze, nourishing the relationship between central government and devolved authorities, and replacing the unelected House of Lords with a new, smaller, democratically elected second chamber.”

Speaking to the BBC about Lords reform this morning, Sir Keir described the second chamber as being “indefensible”.

He added: “Anybody who looks at the House of Lords would struggle to say it should be kept.

“We want to abolish the House of Lords and replace it with an elected chamber that has really strong missions, so, for example, looks after devolution and actually makes sure our politics works.

“So yes, we do need to abolish the House of Lords”.

When asked whether the abolition of the Lords would take place in Labour’s first term in power, if elected, Sir Keir said he wants “all of the recommendations in the report” to be “carried out as quickly as possible”.

He added: “We will now after today have a process of consultation, testing the ideas with a view to how to implement them.

“The reason we’re having the consultation now before the election is because I am absolutely determined that an incoming Labour government will be a Government of delivery.

“So I want the consultation out the way before the election, so we can get on with delivery.”