The White House climate summit made history as the first digital gathering of 40 world leaders, according to Douglas Brinkley, a presidential historian, but demonstrated that even the world’s most powerful people are not immune from the Zoom-induced glitches that have plagued remote workers throughout the pandemic.

“We’ve never had this kind of virtual global summit before,” Mr. Brinkley said. “It was amazing to see how bad the technology is, and it makes you think, ‘How are we going to solve climate change when you can’t even do video linkage for world leaders?’”

The opening speeches by President Biden and Vice President Kamala Harris were beset with painful echoes, evidently a result of overlapping microphone or speaker devices. Secretary of State Antony J. Blinken introduced President Vladimir V. Putin of Russia, but the screen alternated between Mr. Putin and President Emmanuel Macron of France, as Mr. Putin sat in stony silence. And as China’s president, Xi Jinping, launched into his speech in Chinese, there was a prolonged delay before an English-language translator joined in. 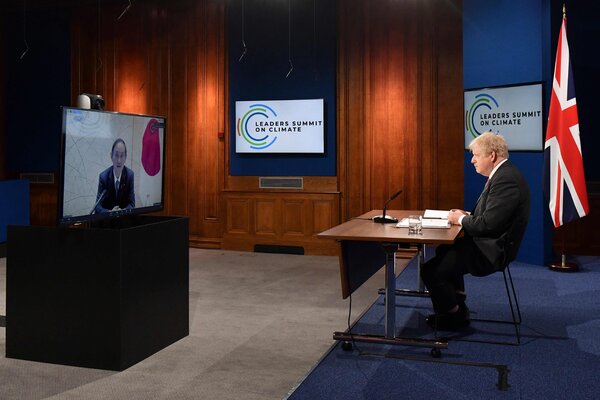 Mr. Brinkley said that the format — necessary because of the ongoing coronavirus pandemic — would probably severely limit the possibilities for diplomatic breakthroughs.

“Usually these world leader summits are about getting the people together to talk informally on the sidelines,” he said. “That’s the way things really get done — not when everybody’s watching you doing your fake, button-down posturing.”

The image was a stark contrast to the typical scene at global summits, in which leaders follow one another at a tall lectern in front of packed grand halls, punctuated by applause — or other large-scale in-person reactions.

Still, Mr. Brinkley said that even the tech-addled talks might help make some small headway in the intractable problem of global warming. “Even flawed video dialogue is better than nothing.”

An earlier version of this article misspelled the given name of the French president. He is Emmanuel Macron, not Emanuel.