Appearing at her first daily coronavirus briefing of the week in Edinburgh, the First Minister was challenged by Sky News reporter Deborah Haynes on Russia’s alleged interference into the 2014 Scottish independence referendum. The claim was part of an investigation published on Tuesday by the Intelligence and Security Committee (ISC) on Russia’s interference in UK’s politics. But when the reporter challenged Nicola Sturgeon on it, the First Minsiter squirmed, claiming she would only briefly touch on the subject as it was important the daily meeting remained focussed on coronavirus.

The reporter asked:”The ISC say they found there was evidence that Russia tried to interfere in the 2014 Scottish independence referendum.

“What do you say to that and are you worried that Russia is again trying to interfere in efforts to hold a second referendum with the intent being to try to split Scotland off from the UK and make the UK weaker?

“And just secondly, are you worried given that there is this evidence of Russia attempting to interfere in the Scottish referendum, the Government then didn’t see fit to task the UK’s intelligence agencies to look into whether or not the EU referendum was also similarly target by Russia?”

But Ms Sturgeon blasted: “Deborah this is a COVID briefing, I think this is been made pretty clear. So I’m going to limit what I say on other issues because it’s really important the people have the opportunity to watch these briefings and hear a full case on COVID issues. 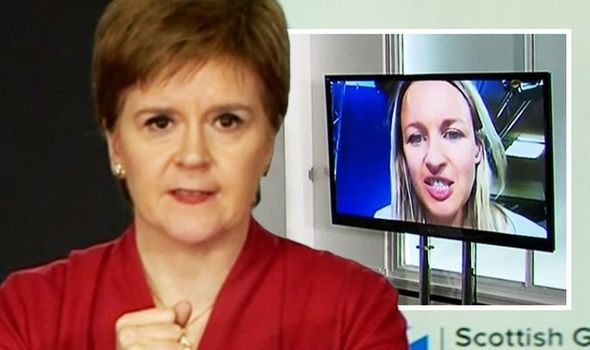 “If there is a more elaborate response that you want from me on the Intelligence and Security Committee report later I’m happy to provide that.

“As you can probably gather from my COVID remarks so far I’ve been pretty preoccupied with all matters virus.

“This morning I’ve had a read through the Intelligence and Security Committee report, I will read it in more detail when I get the opportunity later on.”

Ms Sturgeon appeared to downplay the findings of the report, arguing it only contained “three lines” on the Scottish referendum.

She added: “I will say firstly that we should not be in any way complacent about the possibility of Russian interference in our democratic processes.

“Secondly, I don’t think you can really draw any conclusions from the three lines that the report has on the Scottish referendum but I would include that in my general remark about not being complacent about Russian interference.

“Although I will say that the Scottish independence movement and the values I and my party stand for, I don’t think we could be further removed from the values that Vladimir Putin and the Russian regime stand for.”

The First Minister went on to suggest the UK Government had been “negligent” on its failure to investigate allegation of Russian interference in the UK’s democratic process.

She said: “On the Brexit referendum it appears that the Committee concludes that there’s no evidence of interference because the Government haven’t looked for it.

“And that brings me to my last point. I do think that the main message out of an initial reading of this report would be what I think could possibly be described as negligence on the part of the UK Government in the face of potential Russian interference and I hope that this report leads to a much more rigorous approach and to the UK Government taking these threats to our democratic process much more seriously than they appear to have been doing so far.”