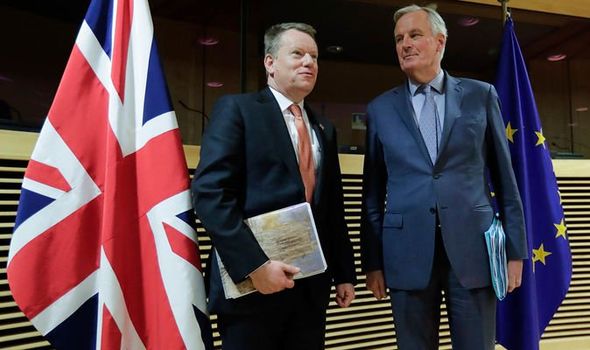 Lord Frost also accused the EU of having “significantly undermined” post-Brexit measures in Northern Ireland with its threat to block Covid vaccine exports. The Cabinet Minister insisted the UK’s unilateral move to extend grace periods on border checks was legal under the Brexit trade deal.

However, the EU is preparing a legal challenge.

EU Commission Vice-President Maros Sefcovic called it a “violation” of parts of the Brexit withdrawal deal.

But Lord Frost said the move was lawful and designed to protect the
everyday lives of people in NI.

“Our agenda is one of an outward-looking country, confident we can work with others towards common goals. That is our hope for our ties with our European friends and allies too. I hope they will shake off any remaining ill will towards us for leaving, and instead build a friendly relationship, between sovereign equals,” he said.

Northern Ireland has remained a part of the EU’s single market for goods, so products arriving from mainland Britain undergo EU import procedures.

But it has led to disruption to some food supplies and online deliveries in NI.

Lord Frost blamed the EU for increasing tensions with its now-abandoned threat to use the Protocol to control Covid vaccine exports.

Then, last week, the UK extended a grace period on new checks on food products and parcels from the end of March to October, without the agreement of the EU.

Meanwhile, former Defence Secretary Penny Mordaunt has been appointed as the Commons minister on the Europe brief, working with Brexit minister Lord Frost.