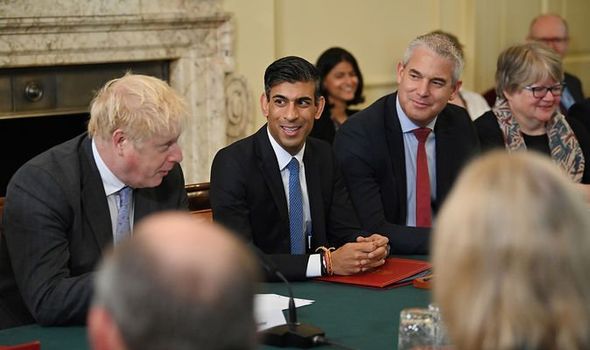 The Sunday Express has learnt that a group of senior ministers including Foreign Secretary Liz Truss, Business Secretary Kwasi Kwarteng and Leader of the House Jacob Rees-Mogg are deeply unhappy about plans to raise corporation tax on business in 2023 by six percent.

The current rate is the lowest in the G20 with 19 percent but Mr Sunak has been persuaded to hike it to 25 percent to help pay the covid debt.

While publicly supporting the Prime Minister, a number of senior ministers have privately attacked the tax raising policy and fear that it will stifle the economic growth needed to help the UK recover from the cost of covid and the lockdown.

One cabinet minister told the Sunday Express: “We have got to stop doing what the bean counters want in the Treasury. They are looking in the short term and not at the longer-term strategic options.”

Another senior minister sarcastically added: “I don’t understand how you can raise taxes and grow the economy, I’m not smart enough.”

The minister added: “Tax is an attack on economic activity so raising taxes is bad for growth.”

The minister said: “I just hope the Chancellor finds a way of cancelling that corporation tax rise. It will not be good for the country.”

A third member of Mr Johnson’s top team told the Sunday Express that tax has a natural limit of 38 percent of overall national income.

“After 38 percent people find a way of avoiding it,” the minister noted. “Even when [former Labour Prime Minister] Harold Wilson had an income tax rate of 90 percent he failed to get much above 38 percent.

“So increasing taxes will have little to no effect.”

The issue is set to play into any leadership contest in the future according to Tory MPs who are still livid over the National Insurance rise.

One red wall MP told the Sunday Express: “I voted for it out of loyalty to Boris but I’m blowed if I am doing that again. They can b****y well forget it.”

Another Tory MP added: “This has harmed Rishi’s prospects as the frontrunner in a future contest. His rivals will be promising to undo what he has done.”

Wealthy party donors were also telling senior ministers that the tax rises are “going to kill the economy.”

At a private dinner attended by the Sunday Express one called the policy to have a corporation tax rise in two years “economically illiterate” which “will just stop investment in this country.”

Another donor added: “It is ludicrous and clearly dreamt up by people who have little to no experience in business.”

In his interview with the Sunday Express last week, Simon Clarke, the new Chief Treasury Secretary and deputy to Mr Sunak, promised that taxes would be coming down in the future but insisted they could not be avoided now.

He said: “We spent £400 billion responding to this crisis, which never could be imagined in 2019 when we were putting together the manifesto. We have come out of it with a backlog in the NHS and a structural challenge of how to make sure that people have the dignity and support in old age that they deserve.

“Those things have to be fixed and by taking the tough choices on the health and social care levy we have put ourselves in the situation where we are able to bear down on the backlog and to get social care funding on a sustainable basis and invest in the social care workforce. That is the right thing to do.

“The majority of my constituents have been quietly supportive of this.”

He went on: “There was a lady in my constituency I met in August who was in a position which encapsulated all of this. She had a mum who was about to go into care, her son was awaiting treatment for skin cancer. She was literally talking about both. How long it was going to take to get treatment and what it was going to cost the family to look after her mum.

“In a single stroke we have addressed both of those issues.”

He added: “Unlike Labour we are not going to just chuck it on the deficit and hope it goes away or is answered by another government.

“We all hope the economy will grow and grow robustly. As it does, reducing the burden of tax on everyone ought to be a key priority. I know it is something the Chancellor shares that we are fundamentally committed to making sure the burden of tax as the situation improves, goes down.”