WASHINGTON — President Trump vowed on Thursday to send $200 discount cards for prescription drugs to 33 million older Americans, a $6.6 billion election-eve promise with dubious legal authority that he announced as part of a speech billed as presenting a long-awaited health care plan.

Mr. Trump made the announcement before an audience of health professionals in Charlotte, N.C., where he laid out what the White House called the America First health care plan. Though senior administration officials had previewed the speech in a news briefing earlier in the day, they had not mentioned the drug discount cards.

Mr. Trump’s broader plan is short on specifics, and its two core provisions are largely symbolic. The first is an executive order aimed at protecting people with pre-existing conditions — a provision already in the Affordable Care Act, which Mr. Trump is trying to overturn. The second — a push to end surprise medical billing — would require congressional action.

That left the drug discount cards as the major advance in Mr. Trump’s speech. It was not clear where the money for the cards would come from or whether the White House could legally issue them.

A senior administration official said the discount cards would be authorized under a waiver program that allowed Medicare to test certain new policy ideas. Some of the money would come from savings gleaned from the president’s directive this month that required Medicare to pay no more for prescription drugs than in other developed nations, the official said.

But that program has not yet been devised or enacted.

“Is the plan to borrow from potential future savings from a program that does not yet exist?” asked Rachel Sachs, an associate professor of law at Washington University in St. Louis, who studies prescription drug policy.

The announcement came as a surprise because the White House had tried last month to strike a deal with the pharmaceutical industry on a broad effort to lower drug prices. But that deal collapsed after Mark Meadows, the White House chief of staff, insisted that the industry pay for such cards. The companies balked, fearing that they would be footing the bill for the “Trump cards” aimed at older American voters. 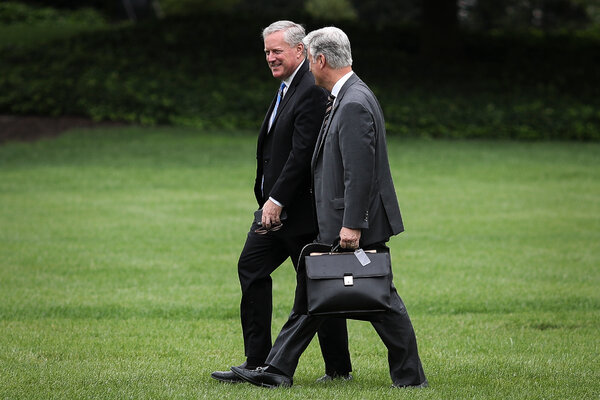 But in an appearance on CNN, Mr. Meadows suggested — without offering an explanation — that pharmaceutical manufacturers would still pay for the cards, which he said older Americans would begin receiving in October.

“It’s the first time that money came from Big Pharma, back from their pockets, in the pockets of American seniors,” Mr. Meadows said. “If they have any question about if he is for real, wait until that card is received in the mail.”

Federal spending must typically be authorized by Congress — a principle that House Republicans sought to uphold when they sued the Obama White House in 2014, arguing that the administration’s health spending as part of the Affordable Care Act had not been properly approved. Mr. Trump canceled that program after taking office, saying it was unlawful.

The White House and the Trump campaign both promoted the promise on Twitter immediately after the speech.

Mr. Trump has been promising since he ran for president in 2016 that he would put together a plan to lower costs, expand coverage and protect people with pre-existing conditions — the primary goals of the Affordable Care Act. But Republicans cannot seem to agree on a replacement.

In laying out his broader plan, the president promised to lower costs and offer “true health security for you and your loved ones.” Instead, that plan was mostly a laundry list of steps he had already taken to lower health care premiums and reduce the price of prescription drugs.

Some of those steps — such as allowing people to purchase short-term insurance plans that do not meet the criteria set forth in the Affordable Care Act — would actually weaken protections for people with pre-existing conditions.

After the speech, Mr. Trump signed an executive order declaring that it was “the policy of the United States” that people with pre-existing conditions should be able to obtain insurance coverage. Brooke Rollins, the acting director of the White House Domestic Policy Council, described it as “the first executive order in American history” to declare such a policy but neglected to mention that a law doing that was already in place.

“We’re putting it down; our opponents, the Democrats, like to constantly talk about it, and yet pre-existing conditions are much safer with us than with them, and now we have it affirmed,” the president asserted. “This is affirmed, signed and done.”

But Alex M. Azar II, the secretary of health and human services, acknowledged that putting power behind those promises would require legislation.

Mr. Trump also announced that he was giving insurers, hospitals and Congress until Jan. 1 — 19 days before the end of his term — to pass legislation to prevent the practice of surprise medical billing, in which patients are charged for care they have inadvertently received from out-of-network providers. If that did not happen, Mr. Azar said, the president would direct him to take action.

The problem of surprise medical billing has attracted bipartisan interest in Congress, and the White House has long endorsed a legislative solution. But leaders in Congress have disagreed about the best approach for determining which doctors and hospitals should be paid by insurance companies in situations that currently generate surprise bills.

Legislation on the matter has not come for a vote before the full House or Senate. Mr. Trump has not taken sides in the policy disputes that have hampered the effort, saying instead that he wants Congress to pass a law by early next year.

Senator Lamar Alexander, Republican of Tennessee and an author of a bill that has passed through the Health, Education, Labor and Pensions Committee, noted that the problem could not be solved through executive action.

“Ending surprise medical bills is a problem that requires a permanent solution passed by Congress this year,” he said in a statement. Mr. Alexander is retiring from Congress at the end of this term.

“The American people can’t afford to wait any longer,” he added.

Mr. Trump has pursued a variety of new health care policies during his first term, including measures to improve the transparency of prices, efforts to improve care for Americans with kidney disease and an expansion of telemedicine as part of the government’s emergency pandemic response. But the president has thus far declined to propose a broad health care plan that ties these individual policies together or explains what would replace the Affordable Care Act if it is repealed.

On Thursday, Mr. Trump spoke in front of a sign repeating the words “America First Healthcare Plan,” an indication that these previous policies and the two vague executive orders represented the bulk of his health care vision as he ran for re-election.

Democrats have mobilized around the court challenge to the Affordable Care Act, eager to argue that the Trump administration wants to eliminate protections for people with pre-existing conditions, an extremely popular policy. The death of Justice Ruth Bader Ginsburg has drawn new attention to the case because her absence increases the chances that the Supreme Court will overturn the health law.

President Trump undermined democracy by refusing to commit to a peaceful transfer of power. Polls show him in tight races even in some red states. Read live updates.