Simon McCoy took aim at Bernard Jenkin for blaming the European Union on the post-Brexit Northern Ireland issues. The UK has admitted that little progress has been made in efforts to avoid a “sausage war” trade dispute with the European Union, with Brussels accused of taking a “purist” approach to the row. Brexit minister Lord Frost again threatened to suspend parts of the Brexit deal covering Northern Ireland in order to reduce barriers to goods moving across the Irish Sea, something that could trigger a trade war with Brussels.

“They’ve made the assumption that because we are not obliged to accept the European court’s jurisdiction over product standards that therefore our standards must be significantly different and therefore everything must be certified.

“This is belligerence, I’m afraid and the point I made in the House of Commons is this is obviously causing a lot of stress in Northern Ireland.”

Mr McCoy interjected: “You have European leaders saying look the UK signed the deal, we in this country were told not too long ago by the Prime Minister that there would not be any time for a border in the Irish Sea that was wrong, we were lied to then. 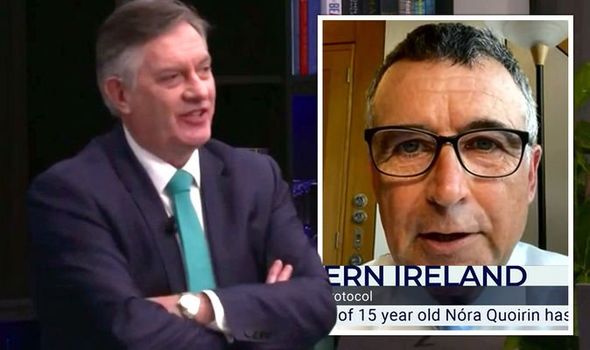 “It’s fair to say we’re not being treated by the EU but they’re right to say, they’re just sticking to the rules that we signed up to.”

Mr Jenkin continued: “Yes we signed and that’s a perfectly fair point but I think there was a certain amount of duress at the time and there were undertakings in the withdrawal agreement that in fact the Northern Ireland protocol would be supersceded by the free trade agreement.