And Brexiteers have hailed the news that Britain will no longer be subject to laws fashioned in Brussels and administered in Luxembourg. Speaking on the day the 1,256-page document was published, Lord Frost, Downing Street’s chief Brexit negotiator, described it as “one of the biggest and broadest agreements ever” ensuring the UK could “set its own laws again”.

He added: “The way we’ve achieved that is there’s no more role for the European Court of Justice, there’s no direct effects of EU law, there’s no alignment of any kind, and we’re out of the single market and out of the customs union just as the manifesto said we would be.

“This should be the beginning of a moment of national renewal for us.

“All choices are in our hands as a country and it’s now up to us to decide how we use them and how we go forward in the future.” 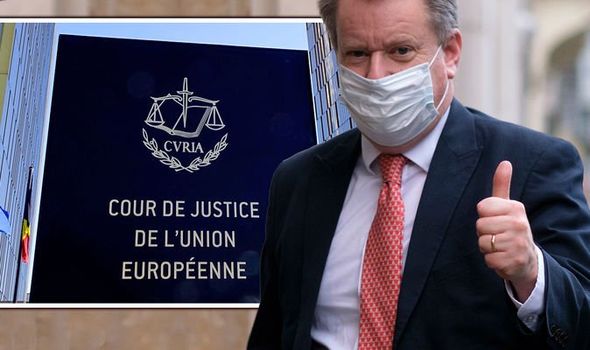 Express.co.uk understands from one well-placed Westminster insider the ECJ aspect is likely to be the key factor which enables hardline Brexiteers to fall in behind Prime Minister Boris Johnson, despite some misgivings about compromises in other areas.

Former Labour MP Gisela Stuart, who quit the party over her euroscepticism and who now sits in the House of Lords, tweeted: “Congratulations to the Brexit negotiation teams on both sides.

“Sets the scene for respectful and good future relationship.”

“Key point for me is that our courts & parliament will have the final say and not the ECJ.”

Brexit Party chairman and former MEP Richard Tice said: “Brexit compromise: elements neither side will like.

“We will have to find ways to deal with this in future. But it’s done.”

The two sides finally clinched a trade deal on Christmas Eve which explicitly recognises that trade and investment require conditions for “a level playing field for open and fair competition.”

If, though, there are “significant divergences” on rules between the two sides, then they can “rebalance” the agreement.

Each side will have an independent subsidy control adjudicator, though it was not immediately clear which body would do this in Britain in the absence of ECJ involvement.

Michael Gove, Chancellor of the Duchy of Lancaster, claimed the agreement would allow Britain to put some  of the divisions caused by Brexit crisis behind it.

Writing in The Times, he said: “Friendships have been strained, families were divided and our politics has been rancorous and, at times, ugly.

“We can develop a new pattern of friendly cooperation with the EU, a special relationship if you will, between sovereign equals.”