Home » Politics » Who Was the First New President to …?

The basics of the inauguration are simple: The new president takes a 35-word oath on a date prescribed by the Constitution.

But the formula has left plenty of room for novelty. As inaugurations evolved over the decades, many became turning points in tradition, marked by mishaps, innovation and spontaneous gestures.

Jimmy Carter began an informal custom when he unexpectedly alighted from his limousine and walked down Pennsylvania Avenue. Barack Obama’s first term got off to an unusual start when he became the first president to repeat his oath of office. Harry S. Truman’s second inauguration was the first to be televised, and Bill Clinton’s in 1997 was the first to be livestreamed.

On Wednesday, Joseph R. Biden Jr.’s inauguration will also seek to balance tradition against the challenges of the present era, including the pandemic and widespread political upheaval. For the first time, the procession to the White House will be replaced with a “virtual parade” in an effort to slow the spread of a virus that has killed nearly 400,000 Americans.

Here’s a look at some of the precedents in presidential inaugural history. 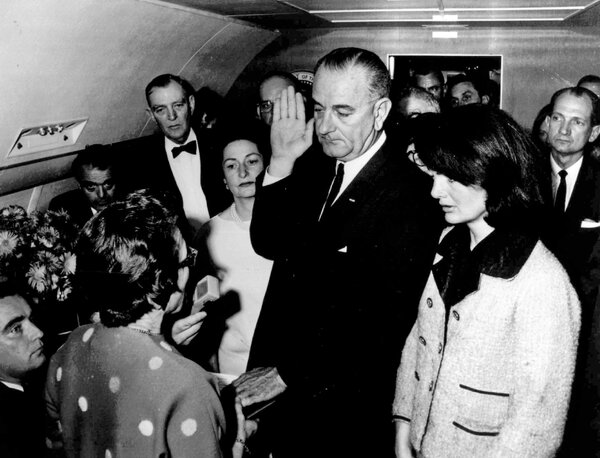 Each president must recite the oath of office, which has been taken 72 times by the 45 presidents of the United States who have preceded Mr. Biden.

Franklin Pierce, in 1853, was the first to choose the word “affirm” rather than “swear” and broke precedent by not kissing the Bible.

Lyndon B. Johnson was the first and only president to take the oath of office on an airplane, after John F. Kennedy was assassinated on Nov. 22, 1963. It was also the first time that a woman administered the oath: Judge Sarah T. Hughes of the Northern District of Texas swore in Mr. Johnson on Air Force One, using a Roman Catholic missal found on board, before the plane left Dallas for Washington.

The oath-taking of Barack Obama, who became the nation’s first Black president in 2009, had a unique twist. He was administered the oath twice by Chief Justice John G. Roberts Jr.: The second time was on Jan. 21 in a do-over at the White House after the two men stumbled over each other’s words during the inauguration ceremony the day before.

George Washington was a man of few words. His second Inaugural Address had 135 of them, making it the shortest ever delivered. In 1817, James Monroe became the first president to take the oath and give his Inaugural Address outdoors, in front of the Old Brick Capitol. William Henry Harrison spoke the longest, delivering 10,000 words in 1841.

George Washington took his oath at Federal Hall in New York City and then delivered his speech inside the Senate chambers. John Adams was inaugurated in the Chamber of Congress Hall in Philadelphia in 1797. In 1801, Thomas Jefferson was the first to walk to and from his inauguration and became the first president inaugurated at the Capitol in Washington.

Inauguration Day wasn’t always in January. George Washington took the oath of office on April 30, 1779. In the 19th century, March 4 was written into the Constitution as Inauguration Day. But in 1933, the ratification of the 20th Amendment established that the terms of the president and the vice president would instead end at noon on Jan. 20.

The first president to be inaugurated on Jan. 20 was Franklin D. Roosevelt, who was sworn in to office for a second term in 1937, with a large crowd looking on despite a cold, soaking rain.

In 1837, Andrew Jackson and Martin Van Buren rode together in a carriage to the Capitol for the inauguration, the first time that a departing president joined his successor. “We have come to expect that now, but we are not having it this year, sadly,” said Jim Bendat, an inauguration historian. “It is an important symbolic moment to show that the old and the new can get along, even if they are in a different party.”

A president whose term is ending is not required to attend the inauguration. In 1801, John Adams became the first president to shun the swearing-in ceremony of his successor, in this case Thomas Jefferson. After months falsely declaring that the 2020 election had been stolen, President Trump announced that he would not attend Mr. Biden’s inauguration.

Top hats were the traditional headgear of choice for many presidential inaugurations. But Dwight D. Eisenhower replaced it in 1953 with a homburg in a break with “official sartorial tradition,” The Times reported. Kennedy reverted to the traditional hat in 1961, before it faded away as official garb.

Kennedy was the first to add a poet to his inaugural events. The event did not go as planned. Robert Frost, then 86, had planned to read “The Preface,” verses he had composed for the occasion. But glare on the page made it difficult for him to see. “I am not having a good light here at all,” he said, according to The Times’s coverage of the event.

Johnson tried to shade the manuscript with his top hat. But Frost instead put it aside and recited his poem “The Gift Outright,” which he knew by heart.

Amanda Gorman, who in 2017 became the first National Youth Poet Laureate, will read at this year’s ceremony.

Over the years, most presidents took the oath with a hand on the Bible. Some chose a family Bible, as Jimmy Carter did, with the one used by Washington placed on the lectern. Theodore Roosevelt was an outlier in 1901. At a friend’s home after the assassination of William McKinley, he did not use one, but was sworn in with an “uplifted hand.”

Others have put their singular stamp on the gesture. Kennedy, the first Roman Catholic to be elected president, used a Catholic Bible. Johnson asked his wife, Lady Bird, to hold the Bible during the oath, making him the first to do so. And Mr. Obama used the Bible belonging to Abraham Lincoln. (Mr. Trump used the same Lincoln Bible in 2017.)

Lincoln’s second inauguration, in 1865, was the first time African-Americans took part in an inaugural parade. Women participated in the inaugural parade for the first time in 1917, at the beginning of Woodrow Wilson’s second term. In 1977, Mr. Carter became the first to set out by foot for more than a mile on the route to the White House. Mr. Carter’s walk with his wife, Rosalynn, and their 9-year-old daughter, Amy, became a tradition that has been matched — in ceremony if not in length — by the presidents who followed.

James and Dolley Madison started the tradition of a White House reception and inaugural ball in 1809. Tickets were $4, or about $85 in current prices.

Inaugurations have reflected innovations in technology and industry. In 1921, Warren G. Harding was the first to ride to his inauguration in an automobile. Fast-forward to bulletproof, closed limousines, which made their appearance in 1965 under Johnson.

Audiences expanded with developments in technology. In 1845, James Polk’s inaugural address reached more people by telegraph. In 1897, McKinley’s inauguration was captured on a motion picture camera, and Calvin Coolidge’s in 1925 was transmitted on radio.

Ronald Reagan, a former actor, had a television camera placed inside his limousine during the ride from the Capitol to the White House in 1985. And in 1997, Bill Clinton’s inauguration was the first to be streamed live on the internet.

Some inaugural ceremonies have broken ground as family affairs. James Garfield’s mother attended his inauguration in 1881, setting a precedent. In 1923, Calvin Coolidge’s father, a justice of the peace in Vermont, administered the oath of office to his son. The first inauguration ceremony attended by both parents of the president-elect was Kennedy’s, in 1961. And George W. Bush’s ceremony in 2001 was the first and only time that a former president, George Bush, attended his son’s inauguration as president.