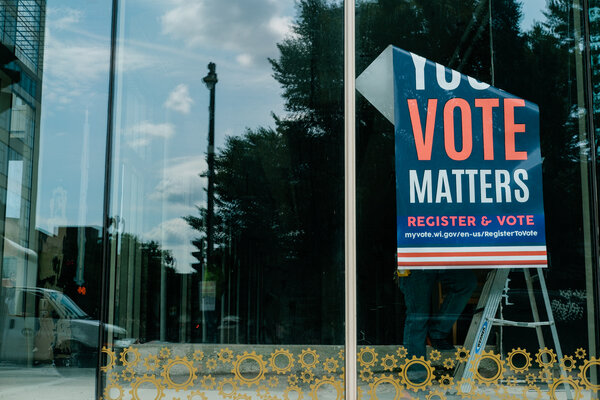 MILWAUKEE — The Milwaukee Brewers’ famous racing sausage mascots rambled about the sprawling parking lot of the Miller Park baseball stadium for a few hours on Tuesday, but they weren’t there to promote sausage or baseball: It was National Voter Registration Day.

The people in the sausage costumes had no need to don face masks, but a few dozen Milwaukee election workers were wearing them, along with high-visibility vests, as they held the city’s first drive-through voter registration event.

Wisconsin allows voters to register at the polls on Election Day, but Jessie Eisenhauer, 39, a medical researcher who needed to change her registered address, chose instead to drive to Miller Park on her way home from work.

“Normally, I would register the day of, but with this pandemic going on, I think less time spent at the voting facility is probably better,” said Ms. Eisenhauer, who wore a colorful mask depicting shelves of books and a smiling bookworm.

Despite the good cheer in the parking lot, election workers were trying to reverse a troubling trend: declining voter registration in Milwaukee in recent years.

The number of registered voters is down by 30,000 since 2016, thanks in part to the state’s purges of inactive voters, according to Claire Woodall-Vogg, the city’s election commissioner. About 300,000 people are currently on the voter rolls.

With the coronavirus pandemic keeping many residents away from city libraries and grocery stores, which traditionally host voter registration tables, the commission added the drive-through registration option this year, and plans to allow drive-through voting, too.