LONDON — Treasury Secretary Janet L. Yellen will try to secure international support this week for a broad agreement that aims to put an end to global tax havens when she makes her first trip as President Biden’s top economic diplomat to the Group of 7 finance ministers summit in Britain.

Such a pact has been elusive for years, as countries like Ireland sought to keep taxes as low as possible in order to attract global investment. But the Biden administration has made securing a global minimum tax a priority as it looks to raise corporate taxes domestically to help pay for a sweeping expansion of the nation’s infrastructure.

Getting other governments to agree to a global minimum tax is critical to Mr. Biden’s goal of raising the corporate tax rate in the United States to 28 percent from 21 percent. Having a global standard that companies pay regardless of where their headquarters are would help discourage American businesses from simply offshoring their operations or intellectual property to countries with lower tax rates, administration officials contend.

Ms. Yellen has said the effort is aimed at ending a “race to the bottom” in which countries cut their tax rates in order to entice companies to move headquarters and profits across borders. Whether she can succeed remains unclear.

Since Mr. Biden took office, Ms. Yellen has offered concessions to her Group of 7 counterparts to help propel global talks that have been underway at the Organization for Economic Cooperation and Development, the Paris-based international policy agency that counts the world’s wealthiest nations as members.

She scrapped a Trump administration proposal that would have essentially allowed American technology companies to opt out of new global digital tax rules. And last month, the Treasury Department said it would support a global minimum tax of at least 15 percent, which was lower than the 21 percent that other countries believed the United States was demanding.

The Group of 7 finance ministers will gather on Friday and Saturday in London, and they are expected to produce a joint statement, or communiqué, on the status of their negotiations at the conclusion of the meeting. So far, Canada, Italy and Japan have signaled their support for a 15 percent minimum corporate tax plan, but it has not yet been endorsed by Britain.

A Treasury Department official said on Wednesday that it was not certain that a consensus would be reached this week on details like a minimum tax rate, but expressed optimism that the negotiations were moving in a positive direction. An agreement in principle by the Group of 7 would give new momentum to parallel negotiations taking place at the O.E.C.D., but significant hurdles remain.

Ireland, Hungary and the Czech Republic, which have built their economies on ultralow corporate tax rates under 15 percent, have balked at signing on. Any of the countries could also use their veto power to topple the measure in the European Union, where a unanimous vote would be required to push through any directive.

Ireland has been one of the most vocal critics of the Biden proposal. Its 12.5 percent corporate tax rate has helped fuel the so-called Celtic Tiger economy since the 1990s, luring Google, Facebook and other corporate giants to establish European beachheads in Dublin, creating jobs and greatly enriching the Irish treasury.

“I believe that small countries, and Ireland is one of them, need to be able to use tax policy as a legitimate lever to compensate for the advantages of scale, location, resources, industrial heritage, and the real material and persistent advantage that is sometimes enjoyed by larger countries,” he said during a virtual summit meeting in April.

In Hungary, where the corporate tax rate is 9 percent, the government of Viktor Orban has said setting a higher rate would be unfair, and that countries have the right to make sovereign decisions on taxes. The Czech Finance Ministry has said tax harmonization set by the United States would mean an increase in the corporate tax rate for Czech companies.

The negotiations over the global minimum tax are part of a broader fight over how to tax technology companies and build on talks that were underway during the Trump administration. The pace of the negotiations have accelerated this year after the Biden administration stepped up its diplomatic efforts with traditional American allies and offered some new proposals that European countries found more palatable than what Ms. Yellen’s predecessor Steven Mnuchin supported.

“I think that the United States has taken on a much more public role in the last few months,” said Lilian V. Faulhaber, a professor at Georgetown University Law Center, adding that this week’s talks would be an indicator of whether recent signs of progress were real. “Up until now, countries have been able to express general support without really putting their money where their mouth is.”

Ms. Yellen’s proposal on the minimum tax stoked elation in France, Germany and other high-tax European countries that have agitated for what they say is an urgently needed tax revolution at a time when digital giants like Facebook and Amazon have become as wealthy and powerful as sovereign states.

Reaching a global accord on both a digital tax and minimum corporate tax would allow governments from Paris to Ankara to start reeling in billions of euros from multinational companies that officials say have not been paying their fair share in the countries where they make profits.

“I’m happy that the United States is catching up with what we have long been proposing and they have blocked for years,” President Emmanuel Macron of France said this month at a meeting in Portugal.

“If they’re ready to come to the table, and we can reach a conclusion this summer, that’s great,” he said.

Ángel Gurría, the O.E.C.D.’s departing general director, said at a news briefing on Monday in Paris that if Group of 7 talks and further discussions this summer by the European Union succeeded, a deal could be reached in October that would effectively compel the organization’s member countries to apply the agreed-upon minimum corporate tax rate.

“There’s been a 180-degree change on taxes by the United States that makes us think there will be a deal,” Mr. Gurría said.

While countries are not legally required to carry out O.E.C.D. accords, governments have tended to go along with them by writing them into their national laws. 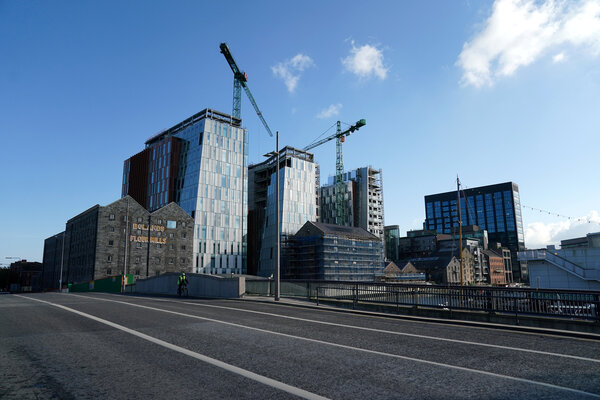 France has been especially persistent in pressing for a deal. For three years, it has levied its own 3 percent tax on the revenues of Facebook and other digital firms, in hopes of prompting a wider O.E.C.D. deal on digital taxation as well as on the minimum corporate tax. The gambit prompted a trans-Atlantic trade war with the Trump administration, which opened an investigation into the French tax after President Donald J. Trump said that only the United States should be allowed to tax American companies.

Bruno Le Maire, the French finance minister, said the inability to tax digital giants in the same way as other goods and services was unjust because it deprived France of revenues needed to plug budget shortfalls and to finance schools, day care centers, hospitals, colleges and environmental initiatives. He estimated a deal could bring $100 billion a year into state coffers, which have been depleted by the coronavirus crisis.

The Biden administration continues to hold out the possibility of retaliatory tariffs against European countries that have enacted digital taxes.

On Wednesday, the administration imposed tariffs on about $2.1 billion worth of goods from Austria, Britain, India, Italy, Spain and Turkey, but it immediately suspended those tariffs for 180 days to allow for negotiations to continue.

The Trump administration had also planned to put in place tariffs on $1.3 billion worth of goods from France, including cosmetics and handbags, though in January it suspended those tariffs indefinitely.

The European Commission last year proposed modernizing tax policies across the bloc as a way to keep pace with the digital economy, but countries have been unable to reach an agreement.

Governments across Europe fear their tax bases will decline as more commerce moves online because digital businesses can rely on their subsidiaries in low-tax countries to avoid paying taxes elsewhere in Europe. The European Commission estimates digital companies pay an average effective tax rate of 9.5 percent, compared with 23 percent for more traditional businesses.

In its budget proposal last week, the Biden administration projected that it could raise more than $500 billion over a decade with the changes that it wants to make to the international corporate tax code. Enacting those changes in a narrowly divided Congress will not be easy, even if the United States is now taking a leading role in the international negotiations.

“Even if there is agreement at the G7 or G20 or O.E.C.D. inclusive framework, which is 137 countries, there’s no guarantee that any or all of those countries will be able to enact the legislation,” said Laurie Dicker, a tax expert at the accounting firm BDO. “In countries like ours where the executive branch and the legislative branch don’t always work hand in hand, it’s a lot harder.”

Republicans have already signaled resistance to the effort, saying the administration is simply looking for an excuse to raise taxes on American companies, which they say will put those firms at a competitive disadvantage.

“‘Race to the bottom’ is the way the Biden administration describes competition among developed countries to get to a tax code that attracts investment and maximizes growth,” Senator Patrick J. Toomey of Pennsylvania said in April, after Mr. Biden and Democrats introduced their multinational tax plans.

Last week, Senator Michael D. Crapo of Idaho, the top Republican on the Senate Finance Committee, sent a letter to Ms. Yellen expressing concern that her international tax proposals were ceding taxing authority to other countries.

“Any agreement must be based on sound international tax principles, and not arbitrary thresholds rooted in politics or popular opinion of the day,” Mr. Crapo wrote.