Per Se reopens; the chef behind the Awkward Scone shifts gears with a new cafe; and more restaurant news. 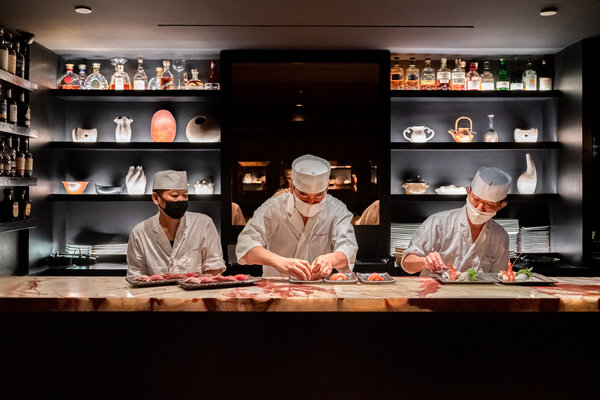 With the pandemic has come a host of chefs and owners reinventing their restaurants. There are revised menus, different themes and even new locations, as some restaurants close and are replaced by others needing more space. Marco Moreira, the owner of the decades-old Tocqueville, and 15 East, the Japanese restaurant next door, has consolidated the two. They are now both in the Tocqueville space, which has been redecorated in monochromatic gray, and now has a sushi bar installed. Mr. Moreira has created five- and six-course tasting menus, $145 and $165, that incorporate sushi and sashimi, along with dishes like foie gras custard, sea urchin and angel hair carbonara, hay-smoked duck breast and venison. There are also some à la carte and sushi omakase options. He said he was able to rehire about half of his staff so far. And, with an eye to year-round outdoor dining, he has created an all-weather outside area, seating 120, with planters, a generous overhang and heaters. Inside, there is socially distant seating for 30. “The idea is to bring the indoor restaurant outside,” Mr. Moreira said. “It cost me $250,000, but I really spent the money to stay alive.”

The spacious layout of the dining room and the salon at this Thomas Keller restaurant seemed as though it was always following social distancing guidelines. Not quite. It will reopen next week and must enforce the 25 percent capacity rule, meaning that, between the main dining room, the salon and the restaurant’s two private dining rooms, only 50 people can be accommodated. In the dining room, there will be a nine-course menu, regular or vegetarian, $355; the salon will offer five courses for $225. (Opens Oct. 15)

The chef Eric See briefly reopened the Awkward Scone, his tearoom and cafe in Bushwick, Brooklyn, this summer but closed it in June. Instead, he has shifted gears and opened this cafe named for his grandmother, where the cooking of his native New Mexico takes the spotlight. There are stuffed sopapillas, breakfast burritos, brioche egg sandwiches, stuffed poblanos and rye-crusted apple pie with green chiles and Cheddar, all served to go. And count on the cafe’s signature chile-studded scones. Lani Halliday’s Brutus Bakeshop is also running a pop-up in the space. The hours are Wednesdays and Thursdays, 8 a.m. to 4 p.m., Fridays through Sundays, 9 a.m. to 7 p.m.

‘Voices From the Kitchen’

For the past five years, La Cocina, a nonprofit incubator serving low-income entrepreneurs in the San Francisco Bay Area, has produced this stage presentation and benefit featuring first-person stories. This year, it will be available on its YouTube channel ($10 suggested donation). Viewers in the Bay Area can also order food boxes ($75 to $150) prepared by La Cocina chefs to enjoy during the streaming; for others, a box of snacks is available nationwide ($75, including delivery). An additional service fee is added to all options.

Hole in the Wall

A fourth iteration of this Australian cafe has crossed the river to open in Brooklyn. With dishes like pulled pork Benedict, it will serve brunch daily, probably a good thing during the pandemic when, for some, it makes no difference whether it’s Sunday or Tuesday. (Saturday)

A cross-country expression of tacos is what’s on offer at this joint venture between Ruben Rodriguez, the chef and owner of Nai Tapas in the East Village, and Juan Acosta, an owner of Carnitas El Momo in Los Angeles. There are five pork-centric tacos, and four others, including one with shrimp and a vegetarian one, with shawarma-roasted cauliflower.

Chefs on the Move

For its one-year anniversary, this Japanese restaurant has invited guest chefs to create elaborate temaki hand rolls, with each chef’s creation featured for a week through Nov. 1. Through Sunday, Cedric Vongerichten of Wayan will serve peekytoe crab with uni, green chile emulsion and lime powder in a nori shell. From Oct. 12 to 18, Suzanne Cupps of 232 Bleecker will prepare honeynut squash tempura with pickled ají dulce, black garlic and scallions. Oct. 19 through 25, James Kent of Crown Shy will bring on scallops with uni, apples, pickled chiles and mint, and Oct. 26 though Nov. 1, Junghyun Park of Atoboy and Atomix will offer Spanish octopus with kimchi, chorizo, potato and cilantro. The temaki will be served for socially distanced dining-in and to-go, $8 to $10 each.