Melissa Clark is here with a speedy no-recipe recipe for mussels. 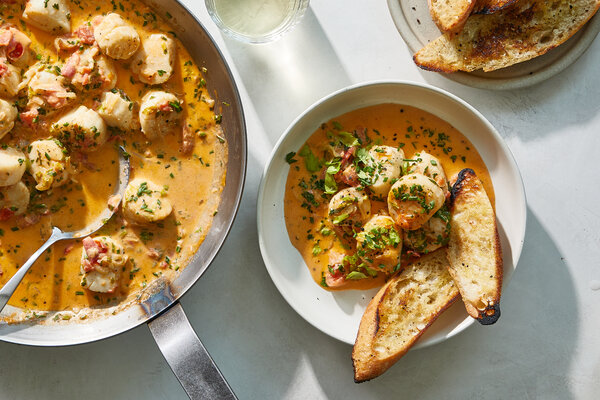 Good morning. It’s Melissa Clark here, taking the reins from Kim while Sam is off the grid, reveling, I hope, in lobster rolls, corn on the cob and his perfectly imperfect homemade blueberry pie.

If I know Sam, he’s probably also eating his body weight in fresh oysters. It’s a smart move. Unlike most of the other seafood we consume, bivalves are not only sustainable, but also can be regenerative, actively improving their habitat by filtering the water and increasing biodiversity. What’s not to love?

I wrote about this recently as it relates to farmed sea scallops (and there are recipes, like the creamy pan-roasted scallops with fresh tomatoes above!), but the same applies to oysters, clams and mussels — and seafood lovers should be eating a whole lot more of them.

While it does take some practice to shuck oysters (try angling the oyster knife down slightly before twisting), cooking mussels, clams and scallops is a snap. Here are some excellent ideas to get you going.

Which brings me to today’s no-recipe recipe, a 15-minute feast starring plump mussels. Mussels are economical and speedy, cooking up so quickly that you won’t heat up your kitchen.

Most mussels on the market are farmed, meaning they’re already pretty clean and debearded. Just give them a good rinse in cool water before cooking.

You’ll need about a pound of mussels per person. Now slice up some kind of allium — a shallot, a few garlic cloves, a small red onion — and sauté it in a big pot with a tightfitting lid with a little oil or butter (don’t add salt yet, mussels can be salty).

I like to throw in some red-chile flakes, or a sliced fresh chile, but this is strictly optional. When the alliums are just lightly golden at their edges, pour in a splash of white or rosé wine, beer, or whatever you’re sipping. (If wine or beer isn’t on the menu, use the large holes of a box grater to grate in the flesh of half of a fat, ripe tomato, or add ⅓ cup diced canned tomatoes.)

Let it simmer for a minute or two to reduce the liquid a bit, then add the mussels and cover the pot. Check them after 5 minutes. Many will have opened, and as they do, use tongs to pluck them from the pot and put them in a bowl, re-covering the pot in between. If any mussels haven’t opened after 10 minutes or so, toss ‘em.

When all the mussels are out, raise the heat to high and throw in a few slices of unsalted butter. Simmer the liquid for a minute or two until it thickens up slightly, then taste. Add a pinch of salt, a sprinkle of pepper, a squeeze of lemon, or a handful of chopped whatever-herb-you’ve-got. Spoon this heady elixir over the mussels and serve them with some good bread — or a spoon — for getting at all the briny, tangy juices. It’s divine.

If you’re not into shellfish but love the idea of sustainable seafood for dinner, Florence Fabricant wrote about porgies, which are abundant on the East Coast and perfect for grilling, with a succulent, almost shrimplike flavor. Try them grilled with lemons and scallions.

We’ve got loads of other thrilling new recipes, too. You might make a light meatless meal of Kay Chun’s grand green aioli followed by one of Eric Kim’s no-bake melon cheesecake bars.

I think the food editing powers that be would be miffed if I didn’t mention at least one chicken recipe here. I’ll give you two: You can’t go wrong with either Sam’s chicken shawarma, with its more than 11,000 ratings and 5-star average, or David Tanis’s coconut chicken with cashews.

Still haven’t found something right for dinner tonight? There are plenty more chicken and other recipes available at New York Times Cooking. Take a look, and if you like what you see and haven’t done so yet, now is a great time to subscribe.

That’s all for now, but I’ll be back on Friday with ideas for the weekend and more.