A virus update, in three charts.

In today’s edition of the Morning newsletter, David Leonhardt writes:

Let’s check in on the state of the coronavirus this morning, with help from three charts. Here’s the first: 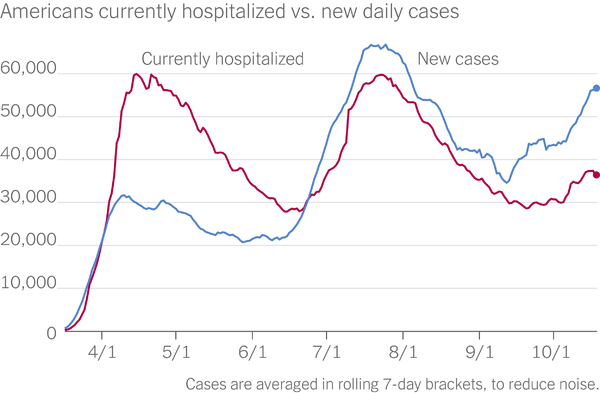 As you can see, the number of new virus cases in the U.S. is surging — and not far from this summer’s peak. You’re probably familiar with versions of that blue line. It is the most common metric for tracking the virus.

The rising line mostly reflects reality: The virus is surging, especially in the Upper Midwest. Cooler weather is leading to more indoor activity, which often leads to new cases, and many Americans seem tired of pandemic restrictions.

But you’ll notice that the red line on the chart — the number of Americans currently hospitalized with virus complications — looks less bad. It has risen lately, but it is not close to its peak.

Why? Partly because the number of virus cases is not actually rising as much as the official case numbers suggest.

That brings us to chart No. 2:

The U.S. is conducting a lot more tests than in the summer or spring. More widespread testing means that the official numbers are capturing a larger share of new virus cases than earlier this year.

“We have probably gotten better at finding cases, as testing capacity has increased, and so we can’t directly compare the size of the waves based on case counts alone,” Caitlin Rivers of Johns Hopkins University told me. “That’s a good development.”

Even as case numbers have soared and hospitalizations have risen, deaths have held fairly steady.

That’s happened as many older people — who are most vulnerable — have been careful about avoiding exposure. A greater share of current new cases is among young Americans.

The quality of virus treatments is also improving. Remdesivir, dexamethasone and monoclonal antibodies all seem to help, as my colleague Donald G. McNeil Jr. points out. Just consider how quickly both President Trump and Chris Christie recovered, despite their age and underlying health risks.

The full picture: There are some silver linings. The statistics on new virus cases that get so much attention are somewhat exaggerating the severity of the current outbreak, because of the rise in testing. And treatments have improved, reducing the death count.

But the virus’s toll has still been horrific — and worse than in many other countries. More than 220,000 Americans have died, and hundreds of people are still dying every day.

The overall situation is also getting worse, as the hospitalization numbers make clear. In some states, hospitals are almost full, and the virus continues to spread. “I’m just waiting to see if our community can change our behavior,” Debra Konitzer, the top health officer in Oconto County, Wis., recently said. “Otherwise, I don’t see the end in sight.”

As Donald McNeil says, “The fall wave has just begun.”