Afghanistan: Millions at risk of starvation as vital seeds go to waste in warehouses

More than half of Afghanistan’s population is predicted to face acute hunger this winter as drought and a crumbling economy are causing an unfolding crisis.

Humanitarian organisations have told Sky News that the suspension of development aid is contributing to seed going to waste in warehouses while people in the country are starving.

The UN fears the crisis will only get worse without drastic action, as weather patterns suggest a further drought in the main wheat producing regions of Afghanistan is likely this winter.

That figure grew to 10% earlier this year, with the north east the worst affected part of the country.

It shot up to 17% last month, driven by high rates in the western provinces.

And it is predicted to reach 21% across Afghanistan next spring.

The crisis has resulted from both long-term climatic factors and the more recent political upheaval in the country.

A drought hit large swathes of the country at the beginning of the year, resulting in decreased harvests of wheat, which accounts for almost 60% of Afghans’ calorific intake.

It has led to record wheat prices at a time when the economy has also been hit by the shock of the Taliban takeover and the freezing of many of the government’s assets held abroad.

The drought was caused by a La Niña weather event – a cooling of the air over the pacific that typically leads to dry conditions in parts of central Asia and which occurs a few times a decade on average.

All but the very northeast of the country recorded below average rainfall, with some areas seeing over 140mm less rain than usual over the winter.

The drought hit almost all of the country except the north east.

It was particularly severe in many of the main wheat producing regions in the north and west.

Rainfed wheat fields are the most vulnerable to drought – they are found in the north of the country.

Badghis province has more area of land dedicated to wheat cultivation than any other. It was also the second worst affected province by the drought.

And around Zaman, in Badghis, the impact of that drought can be seen in satellite images from the last year (use the slider to see the impact).

The consequences of the agricultural problems, in a country that has had to import wheat to make up a shortfall even during strong harvests, are profound.

Richard Trenchard, the Afghanistan country director for the UN’s Food and Agricultural Organisation, said: “The scenes are heartbreaking – you see it in the eyes of mothers, the stares of fathers, and the blank expression of starving children. I’ve never seen a crisis that has spiralled so dramatically and at such scale… our teams on the ground have never seen anything like it – village after village has no food, no cash, no seed.”

And it is not just crop yields that have suffered – livestock have not had adequate vegetation to graze, with the Afghan government announcing that three million animals were believed to be at risk last summer.

Some of the areas hardest hit by the drought are also those that in the past have reared the most livestock.

Herat was the province most affected by the drought. Historically it produced more sheep than any other province but reports have emerged here of people having to sell their daughters, such is their desperation for money.

Kandahar typically holds the second highest number of sheep, but it was hit by the drought around the provincial capital.

According to Mr Trenchard, drought, economic implosion, and the suspension of development aid are all coming together to create what will soon be the worst humanitarian crisis in the world.

“The suspension of international development assistance, which underpins so many basic services in Afghanistan, has hit hard, with people like doctors not being paid for months,” he said.

“Unsold good quality seed is sitting in warehouses as there’s no money to buy it. A World Bank funded seed distribution scheme, which usually distributes 15,000 metric tonnes of wheat seed hasn’t delivered any this year, as the ministry in charge has had the funding cut off.

“What’s really worrying is that we haven’t seen the worst of it – over 55% of the population are predicted to be in acute food insecurity over the winter. That means you are unable to get the food you need on a daily basis – you are skipping meals and selling your belongings to get food.” 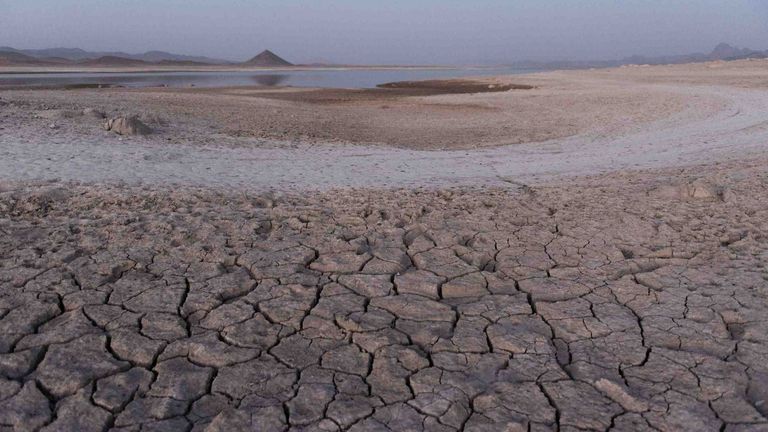 Unlike some previous recent food crises in Afghanistan, the current problem is affecting not just rural communities, but also urban areas.

Shelley Thakur, the World Food Programme’s (WFP) spokesperson for Afghanistan, said: “There’s a new class of hungry people in Afghanistan, what would have been a more affluent middle-class group of urban residents.”

The WFP assisted five million people last month and will scale that up again next month. But it requires money – they estimate they will need $220m (£164m) per month to sustain their operations.

The coming winter and the political situation provide challenges to reaching those in need. The WFP and UNICEF, for example, reach many children through school outreach programmes, meaning it has become more difficult to help girls if the Taliban stop them from attending school.

And further problems loom on the horizon.

In late October the same La Niña weather patterns were observed again, making it likely that Afghanistan will see another drought this coming winter, when so many are already struggling in the country.

Azhar Esan, associate research scientist at Columbia University’s International Research Institute for Climate and Society, said: “Current sea surface temperature anomalies across most of the equatorial Pacific Ocean are negative, and strengthening to a level that now reflects a second La Niña anticipated for the upcoming winter and spring.

“This is not good for winter crops, such as wheat, but a lack of winter snowfall also affects irrigation for summer crops supplied by snow melt.”

La Niña are a natural phenomenon, but climate change is playing a role in how often they occur and their severity.

Mr Esan continued: “Future climate models are in agreement, showing that both the frequency of La Niña are increasing, and also their intensity in the 21st century.”

With such a bleak outlet and millions at risk of starvation, the message from Ms Thakur and other aid organisations is clear: “Don’t forget Afghanistan.”

The Data and Forensics team is a multi-skilled unit dedicated to providing transparent journalism from Sky News. We gather, analyse and visualise data to tell data-driven stories. We combine traditional reporting skills with advanced analysis of satellite images, social media and other open source information. Through multimedia storytelling we aim to better explain the world while also showing how our journalism is done.