A video lawyers say shows Arbery’s killing by two armed white men has ignited fury and calls for justice across the US. 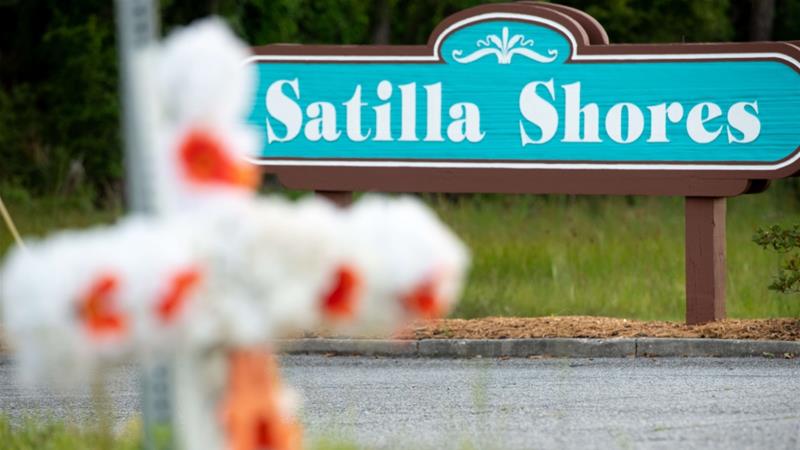 The parents of an African American man slain in a pursuit by two armed white men have called for the immediate arrest of those responsible instead of waiting a month or longer before a grand jury in the state of Georgia could consider bringing charges.

One of the men alleged to have killed Ahmaud Arbery, Gregory McMichael, worked as an investigator in the Glynn County district attorney’s office. He retired last year.

“I think no arrests have been made because of the title he carried as a retired police officer.” Wanda Cooper-Jones, Arbery’s mother, said in an appearance on Good Morning America on Thursday.

An outside prosecutor in charge of the case said he wants a grand jury to decide whether criminal charges are warranted. That will not happen until at least mid-June, since Georgia courts remain largely closed because of the coronavirus pandemic.

A swelling outcry over the February 23 shooting of Arbery intensified this week after a cellphone video that lawyers for his family say shows the killing surfaced online Tuesday.

Following the video’s release, a large crowd of demonstrators marched in the neighbourhood where Arbery was killed, and the state opened its own investigation, which the governor and attorney general pledged to support.

The men who pursued Arbery before shooting him told police they believed he had committed a recent burglary in the area.

Cooper-Jones, told reporters Wednesday she believes her 25-year-old son “was just out for his daily jog” in a neighbourhood outside the port city of Brunswick, Georgia. She said she has not seen the video and has no desire to do so.

“I saw my son come into the world,” Jones said. “And seeing him leave the world, it’s not something that I’ll want to see ever.”

Attorneys for Arbery’s family said the father and son shooters, who have acknowledged in a police report grabbing guns and pursuing Arbery in a truck after seeing him running in their neighbourhood, should be arrested now instead of awaiting an indictment from a grand jury – as often happens in criminal cases.

“These men were vigilantes, they were a posse, and they performed a modern lynching in the middle of the day,” said Lee Merritt, a lawyer for Arbery’s mother.

According to an incident report filed by Glynn County police, Arbery was shot after two men spotted him running in their neighbourhood on a Sunday afternoon.

Gregory McMichael told police that he and his adult son thought the runner matched the description of someone caught on a security camera committing a recent break-in in the neighbourhood. They armed themselves with guns before getting in a truck to pursue him.

The father said his son, Travis McMichael, got out of the truck holding a shotgun, and Arbery “began to violently attack” him. He said Arbery was shot as the two men fought over the shotgun, according to the police report.

After Arbery was shot, the police report says, Gregory McMichael turned him onto his back to see if he was armed. The report does not say whether he had a weapon.

A phone number listed for Gregory McMichael has been disconnected. The Associated Press could not immediately find a phone listing for Travis McMichael.

The cellphone video, initially posted by a Brunswick radio station, shows a Black man jogging along the left side of a road. A pick-up truck is parked in the road ahead of him. One man is inside the truck’s bed, and another is standing beside the open driver’s side door.

The runner crosses the road to pass the truck on the passenger side, then crosses back in front of the truck. A gunshot sounds, and the video shows the runner grappling with a man in the street over what appears to be a shotgun or rifle.

A second shot can be heard, and the runner can be seen punching the man. A third shot is fired at point-blank range. The runner staggers a few feet and falls, face down.

Atlanta Mayor Keisha Lance Bottoms said in a Wednesday tweet: “Honestly and selfishly, I didn’t want to watch the murder” of Arbery.

Honestly and selfishly, I didn’t want to watch the murder of #AhmaudArbery. I didn’t want to feel that nauseating churn of my stomach I get each time “it” happens. But that feeling doesn’t compare to the loss and sadness of his and too many other families. May justice be served.

“I didn’t want to feel that nauseating churn of my stomach I get each time ‘it’ happens”, Bottoms continued. “But that feeling doesn’t compare to the loss and sadness of his and too many other families. May justice be served.”

Tom Durden, the district attorney appointed to oversee the case, declined to comment on Tuesday when asked if the video depicts Arbery’s shooting.

The Georgia Bureau of Investigation got involved on Wednesday after Durden requested the agency’s help. GBI Director Vic Reynolds said he assigned three supervisory-level agents to the case.

“I realize that emotions are running high in this community and they’re running high throughout this state,” Reynolds said in a statement. “And the last thing anyone wants to do is extend us any patience. But I also realize that this investigation must be done correctly.”

Georgia law says a person can kill in self-defence “only if he or she reasonably believes that such force is necessary to prevent death or great bodily injury … or to prevent the commission of a forcible felony.” The law also says a person who provokes an attack or acts as “the aggressor” can not claim self-defence.

Merritt, the attorney for Arbery’s mother, said the US Justice Department should also investigate the death as a hate crime.

“The FBI has said it’s assisting,” said Justice Department spokesman Matt Lloyd, “and as is standard protocol, we look forward to working with them should information come to light of a potential federal violation.”

The killing has drawn calls for justice from state and national authorities across the political spectrum.

“Based on the video footage and news reports that I have seen, I am deeply concerned with the events surrounding the shooting of Ahmaud Arbery,” Carr said in a statement. “I expect justice to be carried out as swiftly as possible.”

Former Vice President Joe Biden, the presumptive Democratic nominee for president, also weighed in. “The video is clear: Ahmaud Arbery was killed in cold blood,” Biden tweeted, referring to the death as a “murder”.

The video is clear: Ahmaud Arbery was killed in cold blood. My heart goes out to his family, who deserve justice and deserve it now. It is time for a swift, full, and transparent investigation into his murder. https://t.co/alvY5WjdHx

Representative Alexandria Ocasio-Cortez, a figurehead of the left-wing of the Democratic party, said in a tweet Thursday morning that Arbery was “murdered for being Black”.

Ahmaud Arbery was murdered for being Black.

His White assailants were allowed to roam free *for months* after lynching him. They faced no charges, no arrests. Police had video of Ahmaud’s murder the day it happened.

Jackie Johnson, the district attorney for Glynn County, recused herself from the case because Gregory McMichael worked as an investigator in her office.

George Barnhill, the first outside prosecutor on the case, stepped aside in mid-April at the urging of Arbery’s family. Barnhill has a son who works as an assistant prosecutor for Johnson.