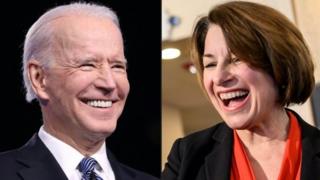 Minnesota Senator Amy Klobuchar has announced that she will not seek to be Joe Biden’s running mate for the US presidential election in November.

Ms Klobuchar said the Democratic nominee should choose a woman of colour as the vice-presidential candidate.

Seen as an early front-runner, the senator faced scrutiny amid protests over the death of George Floyd.

Her career as a local prosecutor in Minneapolis has been brought into the spotlight.

Ms Klobuchar, who also ran to be the Democratic presidential nominee, has faced criticism for not bringing charges against multiple police officers who were involved in shootings during her seven years in the job.

“After what I’ve seen in my state and what I’ve seen across the country, this is a historic moment and America must seize on this moment,” she said during an MSNBC interview.

“I truly believe, as I told the vice president last night, that I believe that this is a moment to put a woman of colour on that ticket.”

BREAKING: Sen. Klobuchar announces she is withdrawing from consideration to be Joe Biden's vice presidential choice: "I think this is a moment to put a woman of color on that ticket." pic.twitter.com/xk4zZIP7Yd

Mr Biden has vowed to choose a woman as his vice presidential nominee to take on Donald Trump in November.

The contenders include senators Kamala Harris and Elizabeth Warren, who also both ran against Mr Biden for Democratic nominee.