WASHINGTON — The Trump administration has recently removed the chief scientist at the National Oceanic and Atmospheric Administration, the nation’s premier scientific agency, installed new political staff who have questioned accepted facts about climate change and imposed stricter controls on communications at the agency.

One of the early signs of the shift came last month, when Erik Noble, a former White House policy adviser who had just been appointed NOAA’s chief of staff, removed Craig McLean, the agency’s acting chief scientist.

Mr. McLean had sent some of the new political appointees a message that asked them to acknowledge the agency’s scientific integrity policy, which prohibits manipulating research or presenting ideologically driven findings.

The request prompted a sharp response from Dr. Noble. “Respectfully, by what authority are you sending this to me?” Mr. Noble wrote, according to a person who received a copy of the exchange after it was circulated within NOAA.

Mr. McLean answered that his role as acting chief scientist made him responsible for ensuring that the agency’s rules on scientific integrity were followed.

The following morning, Dr. Noble responded. “You no longer serve as the acting chief scientist for NOAA,” he informed Mr. McLean, adding that a new chief scientist had already been appointed. “Thank you for your service.”

It was not the first time NOAA had drawn the administration’s attention. Last year, the agency’s weather forecasters came under pressure for contradicting President Trump’s false statements about the path of Hurricane Dorian.

But in an administration where even uttering the words “climate change” is dangerous, NOAA has, so far, remained remarkably independent in its ability to conduct research about and publicly discuss changes to the Earth’s climate. It also still maintains numerous public websites that declare, in direct opposition to Mr. Trump, that climate change is occurring, is overwhelmingly caused by humans, and presents a serious threat to the United States.

Replacing Mr. McLean, who was assigned to a new role in the agency, was Ryan Maue, a former researcher for the libertarian Cato Institute who has criticized climate scientists for what he has called unnecessarily dire predictions.

Dr. Maue, a research meteorologist, and Dr. Noble were joined at NOAA by David Legates, a professor at the University of Delaware’s geography department who has questioned human-caused global warming. Dr. Legates was appointed to the position of deputy assistant secretary, a role that did not previously exist.

Neil Jacobs, the NOAA administrator, was not involved in the hirings, according to two people familiar with the selection process.

The agency did not respond to requests for comment and a request to make the new officials available for an interview. 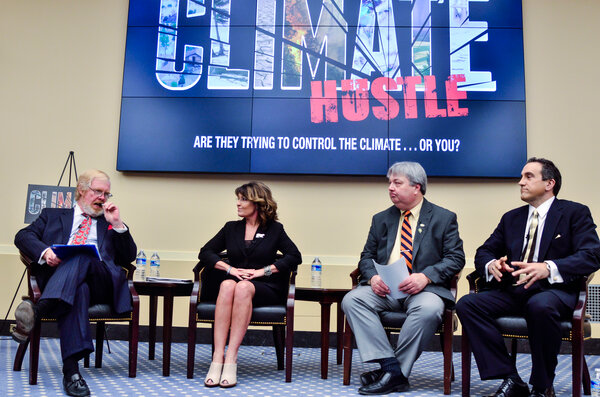 NOAA officials have tried to get information about what the role the new political staff members would play and what their objectives might be, with little success. According to people close to the administration who have questioned climate science, though, their primary goal is to undercut the National Climate Assessment.

The assessment, a report from 13 federal agencies and outside scientists led by NOAA, which the government is required by law to produce every four years, is the premier American contribution to knowledge about climate risks and serves as the foundation for federal regulations to combat global warming. The latest report, in 2018, found that climate change poses an imminent and dire threat to the United States and its economy.

“The real issue at play is the National Climate Assessment,” said Judith Curry, a former chairwoman of the School of Earth and Atmospheric Sciences at the Georgia Institute of Technology who said she has been in contact with Dr. Maue, the new chief scientist. “That’s what the powers that be are trying to influence.”

In addition to Dr. Curry, the strategy was described by Myron Ebell, a director at the Competitive Enterprise Institute and a former member of Mr. Trump’s transition team, and John Christy, a professor of atmospheric science at the University of Alabamain Huntsville.

Dr. Christy, a critic of past National Climate Assessments, said he was asked by the White House this summer to take on a senior role at NOAA but declined the offer. He said he understood the role to include changing the agency’s approach to the climate assessment.

Ms. Curry and the others said that, if Mr. Trump wins re-election, further changes at NOAA would include removing longtime authors of the climate assessment and adding new ones who challenge the degree to which warming is occurring, the extent to which it is caused by human activities and the danger it poses to human health, national security and the economy.

A biased or diminished climate assessment would have wide-ranging implications.

It could be used in court to bolster the positions of fossil fuel companies being sued for climate damages. It could counter congressional efforts to reduce carbon emissions. And, it ultimately could weaken what is known as the “endangerment finding,” a 2009 scientific finding by the Environmental Protection Agency that said greenhouse gases endanger public health and thus obliged the federal government to regulate carbon dioxide emissions under the Clean Air Act.

Other changes in the works could include shifting NOAA funding to researchers who reject the established scientific consensus on climate change and eliminating the use of certain scientific models that project dire consequences for the planet if countries do little to reduce carbon dioxide pollution.

Dr. Noble, the new chief of staff, has already pushed to install a new layer of scrutiny on grants that NOAA awards for climate research, according to people familiar with those discussions.

Meaningfully changing the National Climate Assessment’s findings would be hard to accomplish, according to Brenda Ekwurzel, director of climate science for the Union of Concerned Scientists and co-author of a chapter in the latest edition of the report.

Still, Dr. Ekwurzel said NOAA’s role leading the report is vital and added that any attempt to undermine climate research for political purposes would threaten public safety and economic growth. “You need to have a well-functioning scientific enterprise,” she said. “The more we back away from that, the more we erode our democracy.”

Most of the changes at NOAA could be reversed by the next president, officials say, making next week’s election a referendum on the future of the agency.

The dissonance between NOAA’s work and Mr. Trump’s dismissiveness toward climate change became clear at the end of 2018, with the publication of the latest installment of the National Climate Assessment. The report put Mr. Trump in the awkward position of disavowing the findings of his own government. “I don’t believe it,” the president said of the economic assessment in the report.

But for the president’s advisers, the climate assessment posed a greater problem than being mildly embarrassing. It threatened the administration’s policy aims, because its conclusions about the threat of climate change made it harder, from a legal perspective, for the administration to justify rolling back limits of greenhouse gas emissions.

Mr. Ebell and another former member of Mr. Trump’s transition team, Steven J. Milloy, said they expected that Dr. Legates in particular would steer the next National Climate Assessment in a sharply different direction. They said Dr. Legates intended to question the models that NOAA scientists use to predict the future rate of warming and its effects on precipitation. Climate denialists broadly say the models used by scientists are flawed.

That could ultimately make the endangerment finding, the scientific and legal foundation for regulating greenhouse gas emissions, vulnerable. As recently as July, Mr. Legates explained the connection himself: In an op-ed for Townhall, a conservative website, he noted that the science that underpins the endangerment finding relies primarily on the National Climate Assessment and claimed the models employed by its authors “systematically overestimate” warming.

Officials at NOAA also say they fear that the new staffers will bring more climate denialists into the agency and push out scientists who object. They cite an executive order Mr. Trump signed last week making it easier to hire and fire civil servants involved in setting policy.

The spate of new appointees isn’t the only example of growing political constraints.

In August, a few weeks before the new political staff began arriving at NOAA, the Commerce Department, which oversees NOAA and a handful of other agencies, issued a surprise memorandum: All internal and external communications must be approved by political staff at the department at least three days before being issued. The restrictions applied to social media posts, news releases and even agencywide emails.

The new policy meant that Dr. Jacobs, the NOAA administrator, could no longer send messages to his own staff members without having them cleared from above. The goal of the policy was to make sure all communications “serve the needs of your employees and mission while aligning with the over-arching guidance from the White House and Department,” the memo said.

“I think that until recently NOAA has been mostly spared the political interference with science that we’ve seen as a hallmark across this administration,” said Jane Lubchenco, who served as NOAA administrator in the Obama administration.

“That integrity and the credibility that it brings are threatened by these recent appointments,” Dr. Lubchenco said. “The positions that these individuals are in gives them the perfect opportunity to suppress, distort and cherry-pick information to make it whatever the party line is.”