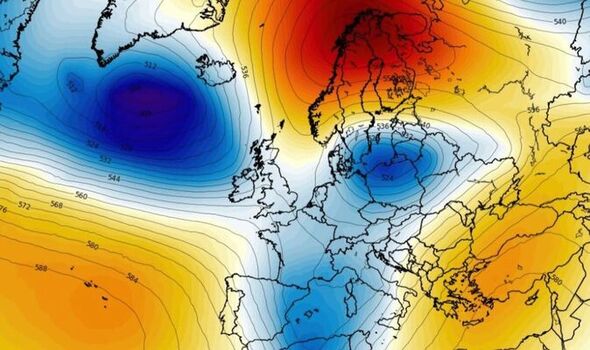 The collision between cold and mild air over the North Atlantic will also fire up the jet stream to drag violent low-pressure systems towards Britain. Wet and windy weather will set in through the start of the week with no end in sight this side of winter.

“We are in the middle and when we get that we see an upset and unsettled pattern of weather in between.

“We are between two big freezes, in the mixer in between, and so for the next week at least we are going to get a bit of everything.”

After a relatively settled weekend, Britain will once again be tossed around a washing machine.

Low pressure will move in from the Atlantic on Monday with only a brief respite on Tuesday before wind and rain ramps back up.

Met Office meteorologist Greg Dewhurst said: “There is quite a bit going on with the weather over the next few days, particularly through Monday across the south of the UK.

“The new working week is turning unsettled as an area of low pressure develops and moves in from the Atlantic, bringing wet and windy weather.

“There will be a brief respite on Tuesday, but the next area of low pressure moves in during the middle of the week.”

Strong winds will hammer Northern Ireland, Wales and the West Country through Monday morning although it will turn milder, he added.

He said: “Across parts of Northern Ireland, Southwest Wales and the West Country, cloud and rain and stronger winds move.

“Temperatures will actually rise to 8C or 9C on Monday morning after icy stretches first thing.

“It will be wet and windy across Northern Ireland, parts of Wales, and the West Country to start the morning.

“Wind gusts across parts of South Wales, Devon and Cornwall could reach 60mph or possibly a little bit higher as this low pressure spirals around pushing bands of rain across much of England and Wales.”

The Met Office has issued warnings for wind across southwestern Britain and southern Wales through Monday.

It warns of damage to trees and buildings, travel disruption, power cuts and large coastal waves.

A Met Office spokesman said: “A complex area of low pressure is expected to develop to the southwest of the UK on Sunday night with the potential for a small area of very strong winds to affect parts of southwest England and possibly South Wales during Monday.

“There is a small chance of gusts of 70mph to 80mph affecting coastal areas and 55mph to 65mph inland within the warning area.

“The winds will ease from the west into the early evening.”

Met Office meteorologist Alex Deakin said unsettled weather will be driven by a strong Polar Vortex–a body of air circling the Arctic region which has begun to sink southwards over Britain.

He added: “The Polar vortex looks like staying strong or anything strengthening further as we go through the last week of November.

“That will lead to more spells of wet and windy weather across the UK.”