Austria to reopen some shops as lockdown eases 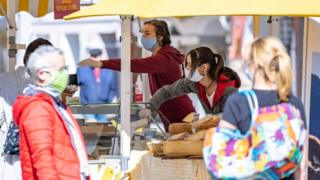 Austria is to reopen thousands of shops on Tuesday as it seeks to ease restrictions brought in to stem the spread of the coronavirus.

Garden centres, DIY stores and small shops will open as part of a step-by-step plan to restart the economy.

However strict social distancing rules remain in place, with people urged to stay at home as much as possible.

It comes as some other European countries ease restrictions imposed over the pandemic.

Spain has allowed some citizens to return to work and Denmark is reopening schools for younger children.

Italy – Europe’s hardest-hit country with more than 20,000 deaths – will allow a narrow range of firms to resume operations on Tuesday.

However, French President Emmanuel Macron has extended the lockdown there for another four weeks until 11 May.

In a televised address, he said the current restrictions had slowed the virus but not beaten it.

The World Health Organization has welcomed the slowing down of infections in some European countries but warned against lifting restrictions too early.

Director-general Dr Tedros Adhanom Ghebreyesus has cautioned that easing measures too quickly “could lead to a deadly resurgence”.

Austria was one of the first European countries to follow neighbouring Italy in imposing strict lockdown measures about a month ago and the government says it has managed to flatten the curve of new infections. It has so far reported about 14,000 cases and 368 deaths.

In an open letter to the country on Saturday, he said he wanted to “come out of this crisis as quickly as possible and fight for every job in Austria”.

From Monday, shops under 400 sq m (4,300 sq ft) in size will be allowed to reopen along with hardware stores and garden centres.

Larger shops, shopping centres and hairdressers are due to be reopened from 1 May while restaurants and hotels could reopen from mid-May if health conditions allow, Mr Kurz has said.

In his address on Monday evening, President Macron said the outbreak in France was “beginning to steady… (and) hope is returning”.

The daily number of deaths rose slightly taking the country’s total to just under 15,000.

“The eleventh of May will be the start of a new phase,” Mr Macron said. “It will be progressive and the rules can be adapted according to our results.”

He said schools would gradually reopen after the new extension but restaurants would stay closed and there could be no festivals until mid-July. He said the most vulnerable people should remain in isolation even after the rules were eased.

Spain’s health ministry said on Monday that the daily number of deaths had dipped slightly, with 517 reported in the previous 24 hours, compared with 619 announced on Sunday. The official death toll is now 17,489.

The number of new infections continues to fall, with the total now at 169,496.

“We are still far from victory, from the moment when we will recover normality in our lives,” Prime Minister Pedro Sánchez warned over the weekend.

“We are all keen to go back out on the streets… but our desire is even greater to win the war and prevent a relapse,” he added. 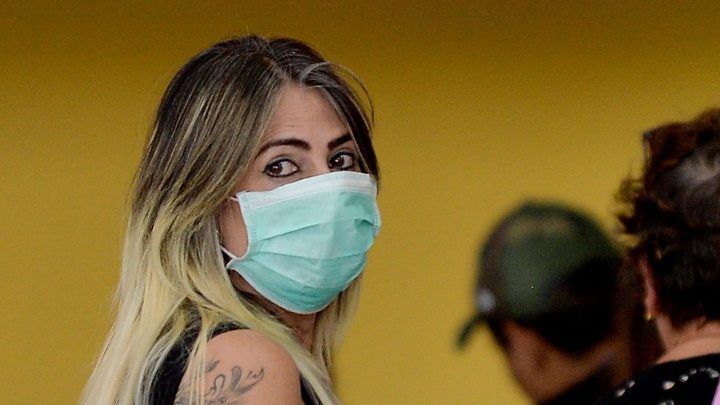 Italian Prime Minister Giuseppe Conte said last week that the lockdown would continue until 3 May, but that a few types of shops and businesses would be allowed to reopen on Tuesday. They would include bookshops, stationers and shops selling children’s clothes.

In Germany, Chancellor Angela Merkel will hold talks on Wednesday with regional leaders on how to exit the country’s lockdown. Germany has recorded more than 130,000 cases and 3,194 deaths.