BBC Weather meteorologist Matt Taylor said temperatures are expected to exponentially rise at the weekend, reaching a high of 21C (70F) on Sunday. The BBC Weather forecaster however warned an area of low pressure slowly moving in over the UK will clash with the area of high pressure currently in charge, generating potentially biting winds that will tamper with the mini-heatwave. Mr Taylor said: “A fair bit of cloud but as we go through the coming days into the weekend, sunshine will increase and, as I’ve already been telling you, it is set to turn warmer.

“Why so? Well, it’s because of where the area of low pressure we have at this moment shifts.

“High pressure winding around in a clockwise fashion, as that area of high pressure moves out towards the east of us, we’re then starting to drag air in from the south. We will slowly see the temperature rise day by day.

“In fact, by the time we hit Sunday, we’ll see temperatures widely in the high teens, 17C possible in the northwest Highlands of Scotland, 21C (70F) possible in the southeast of England.”

Mr Taylor continued: “Area of high pressure to the east of us, this area of low pressure pushing in but what you’ll notice, as they get closer together, the winds will be strengthening as well.

JUST IN: Mini heatwave UK: What is a mini heatwave? Will there be one this weekend? 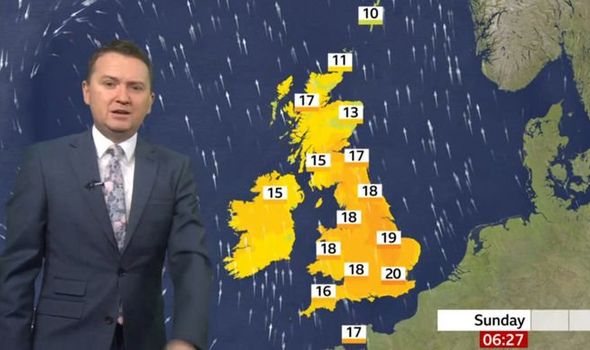 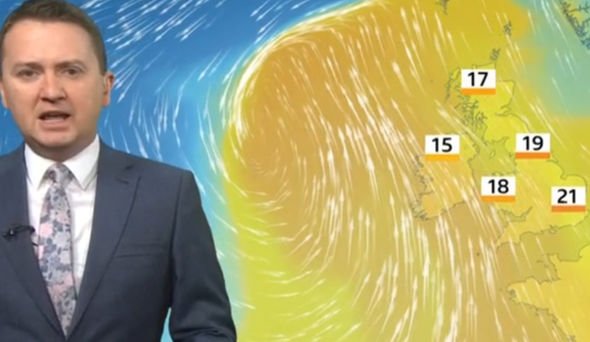 “It will bring a lot more sunshine on Sunday, blue skies to start with for many, not so much mist and fog around.

“Cloud amount to increase to the west on Sunday so there will be some showery rain as we go through the second half of the day, most parts though will stay dry for the day.

“But as I said, a windier day on Sunday. Winds touching gale force later but it will the warmer day of the weekend.”

The BBC Weather meteorologist highlighted the “big contrast” between the warm temperatures expected on Sunday and the chillier feel Britons will be waking up to on Friday and Saturday. 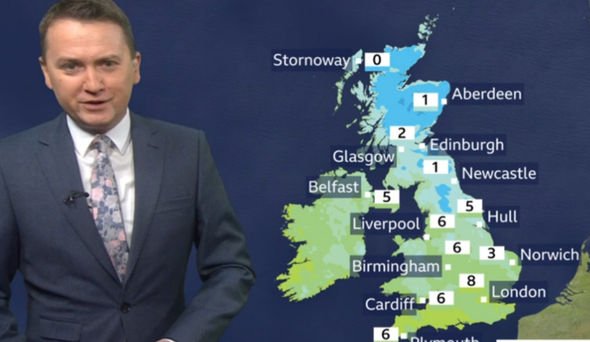 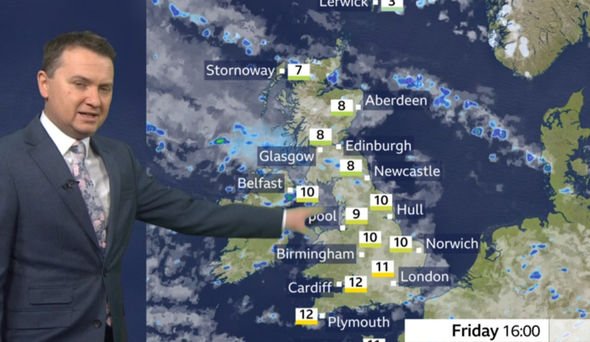 Mr Taylor continued: “Real contrast, really, with what some of us are going to experience first thing this morning. Frost around much of Scotland, northern and, for some, eastern England.

“Could be a bit icy in one or two spots across Scotland, we have seen some wintry showers continue through the night. Some showers in Northern Ireland, southwest Scotland and western parts of England and Wales. The odd spot of drizzle east as well but many places will be dry.

“Fair bit of cloud around today but we will see an increased amount of sunshine towards the southwest later and still some sunny spells across Scotland, where temperatures have been in single figures.

“In fact, for many away from city centres, single figures is to be expected today.” 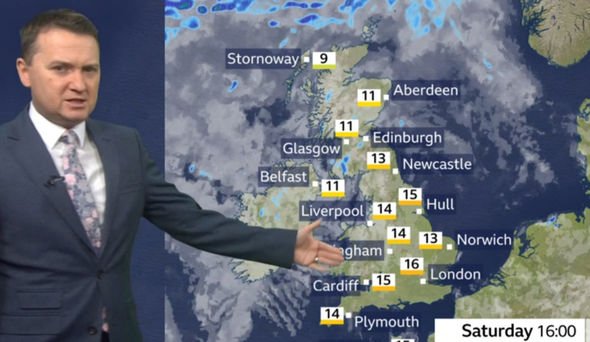 Mr Taylor said skies are expected to clear by Friday evening, with some mist and fog still showing up in the southernmost counties of England.

Saturday is expected to kick off with some outbreaks of rain across Scotland and Northern Ireland but other parts of the UK are set to remain dry for most of the day.

The BBC Weather forecaster added: “Into the weekend we go, we’ve got outbreaks of rain to begin within the far north of Scotland, one or two isolated showers in Scotland and Northern Ireland.

“West of England and Wales mostly dry, varying amounts of cloud and sunshine in southern and eastern parts of England and, already, temperatures back in double figures, some in the mid-teens by Saturday afternoon.”