The BBC Weather forecaster warned temperatures will grow colder from Thursday due to the freezing air being pushed in from the Arctic. Mild winds will also be a feature through the end of the week, with weak gusts still causing a chill across affected areas. Carol Kirkwood said: “We’re opening the gates to much colder, Arctic air across the whole of the UK.

“Some of us have been cold already this week, particularly down the North Sea coastline. It will be cool again for you today and we can see a fair few showers developing as we go through the course of today.

“In between, there’ll be a lot of sunshine around. These are the average wind speeds, so not particularly windy but any gust will be a bit stronger than this and it’s coming from a cold direction.

Ms Kirkwood noted the arrival of the colder air from the Arctic will result in more frost for some areas in the early hours of Friday. 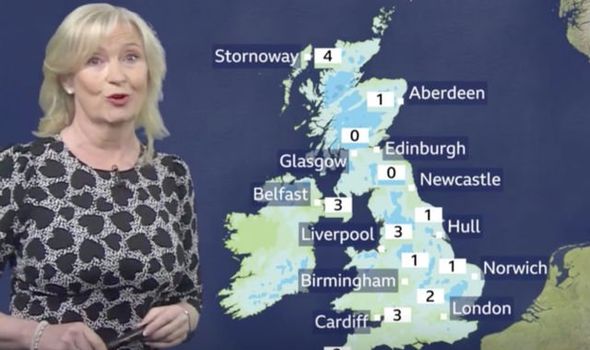 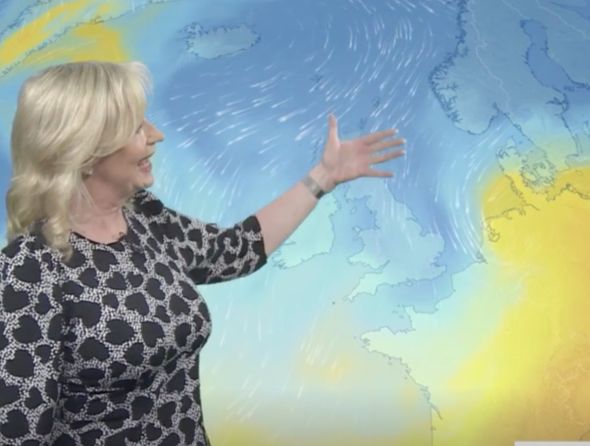 She continued: “Through this evening and overnight, many of the showers will tend to fade, some more developing across the Highlands and the Western Isles.

“Once again, under clear skies, it is going to be cold enough for some frost and quite a widespread frost. That means every night in April, somewhere in the UK has recorded a frost.

“Tomorrow we start off on a cold and a frosty note. There’ll be a lot of dry weather, a fair bit of sunshine.  There will be some showers from the word-go but we will see further showers develop through the course of tomorrow.

“With the lighter winds, they’re likely to be slow-moving and there’s the potential for them not only to be heavy but also to be thundery. 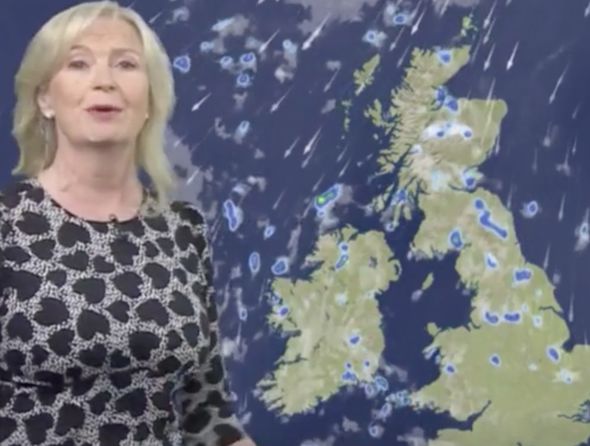 “Temperatures 6C in Lerwick to 14C in London.

“If it’s more significant rain you’re looking for, it looks like on Bank Holiday Monday, we’re looking at some rain coming in from the Atlantic that could be heavy, accompanied by strong winds.”

BBC Weather noted the shift in weather is the result of high pressure giving way to a slow-moving low-pressure system that will bring in rain bands and afternoon showers through the end of the month and start of May. 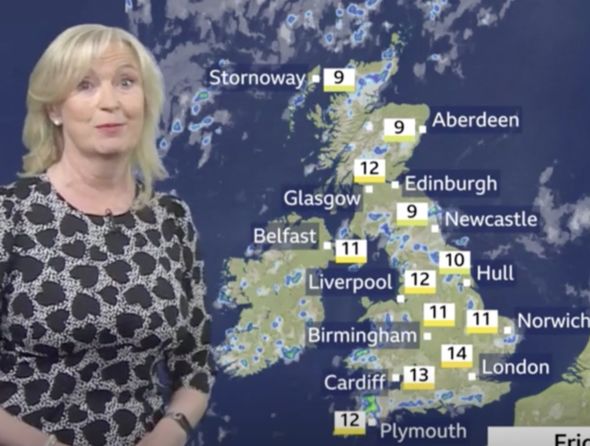 Next week’s forecast from BBC meteorologists read: “For the first full week of May, the forecast has shifted quite drastically from the previous update, which was for drier weather under high pressure.

“Instead, it now looks more likely that the unsettled weather from the end of April will persist in early May, with a wetter, more changeable pattern for the UK.

“The jet stream, a ribbon of fast-moving air in the upper atmosphere that drives weather systems, is strengthening but will tend to be nearby to the south of us. That means that temperatures will continue to be below average, but maybe not as much as they have been recently.

“Between weather systems, we will see brief ridges of high-pressure push in from the south, so there will be some drier days mixed in too. There is a chance that some of these weather systems may bring stronger winds and heavy rain on some days.”