The weather for the end of the week in Europe is expected to be “changeable” and “very unsettled”, according the BBC. Meteorologist Tomasz Schafernaker warned of “flurries of snow” as temperatures plunge below freezing. He also said that some parts of the continent would be subject to “heavy bouts of rain” as a “powerful jet stream” pushes low pressure in.

Mr Schafernaker told viewers: “The most unsettled weather at the moment is across the southern half of the continent.

“Low pressures being pushed by a powerful jet stream have been moving across Portugal, Spain, the Mediterranean and into the Balkans for the last few days.

“This has been delivering heavy bouts of rain, wind and mountain snow, particularly around the Alps.

“This pattern is going to continue for the rest of the week.” 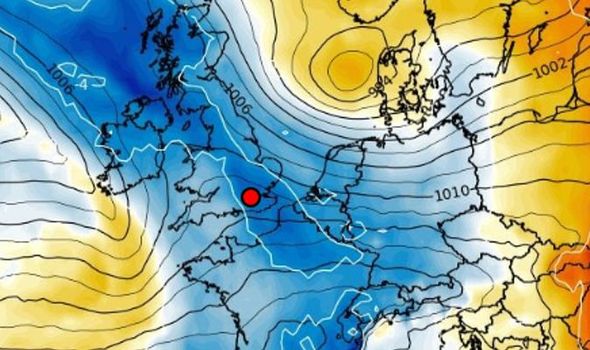 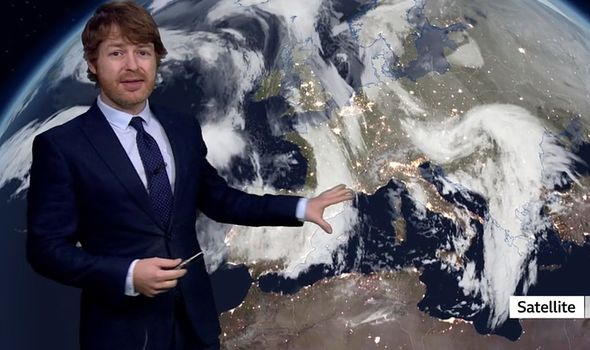 He continued: “There’ll be heavy rain also across parts of Greece during the course of Friday.

“That’s also pushed milder air across the Balkans so it will be above the average here for the time of the year.

“To the north of that, it’s colder. High pressure has persisted across this part of the world for quite some time.

“It will be below freezing by day in Moscow around minus three degrees Celsius. Some flurries of snow will be expected here as well.” 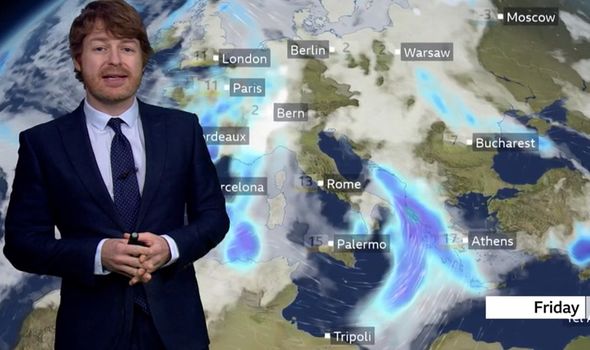 The weather presenter added: “Across Scandinavia, temperatures will generally be above freezing, so it’s cold but it’s not that cold.

“It will move from the Balearics, Corsica, Sardinia and even clipping parts of northern Africa as well.” 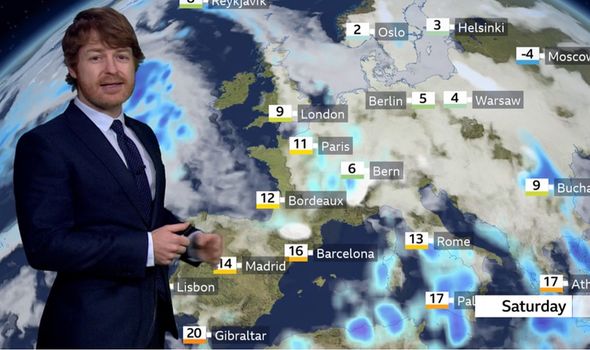 Mr Schafernaker said: “Across the western part of Europe, temporarily on Saturday, it is actually going to quieten down.

“Out city forecasts over the next few days show there’s also some changeable weather there in the UK.

“It looks as if things are going to turn a little bit milder into the weekend and next week as well.

“Elsewhere in Europe, it will be sunny in Moscow on Saturday at minus four degrees.

“It looks as though it will stay below freezing by day in the coming days.”