BBC Weather forecaster Louise Lear warned there could be travel disruption caused by winds stronger than 50mph and heavy rain. She noted while Sunday will be settled for many with some sunshine and some outbreaks of rain, the new week will see a new storm move across the UK. This will force wind speeds back up and bombard the UK with heavy rain, most notably for the north of the country.

Ms Lear said: “Today we will see sunny spells and showers but the wind speed we have seen recently will be easing down.

“There will be some showers particularly for Northern Ireland, northern England and Wales.

“They will gradually drift their way steadily southwards and eastwards perhaps towards East Anglia.

“There will be a few showers further south but few and far between.” 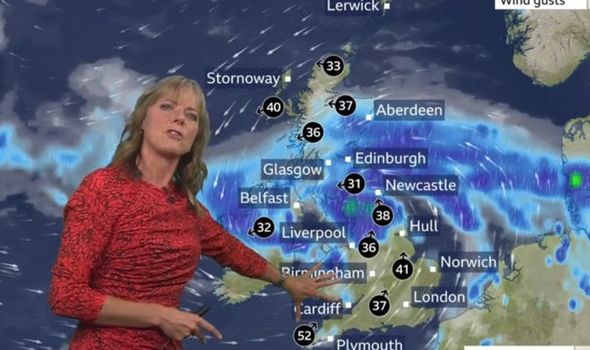 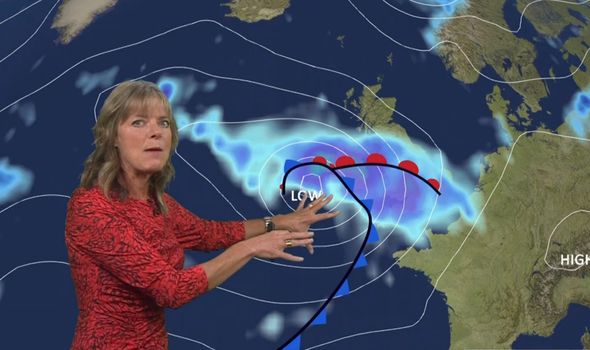 The BBC Weather forecaster also went into detail of the new weather front set to move in this week.

She said: “Through this evening and overnight those showers are going to continue to drift southwards.

“By the end of the night, we are going to see a line of rain in southwest England and some of that could turn quite heavy.”

The temperatures on Monday morning will be notably cooler with single digits across Scotland and the low teens in the rest of the country. 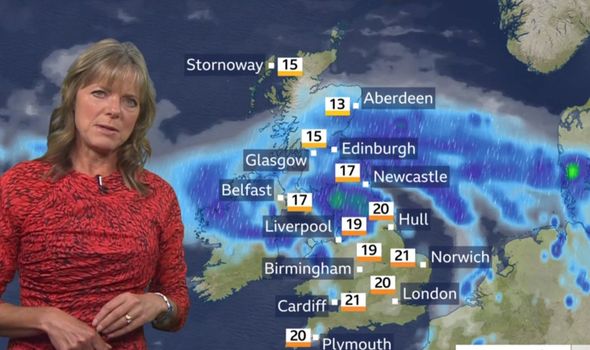 The south can experience some outbreaks of showers on Monday afternoon and evening ahead of the new weather front.

Ms Lear continued: “As we move out of Monday into Tuesday the area of low pressure is going to bring some rain.

“Widespread heavy rainfall is expected and a return to gale force gusts of winds particularly on exposed coasts.

“More gales and the possibility of some travel disruption because of it.

“That rain will continue to drift its way steadily northwards improving the picture for parts of southern England. 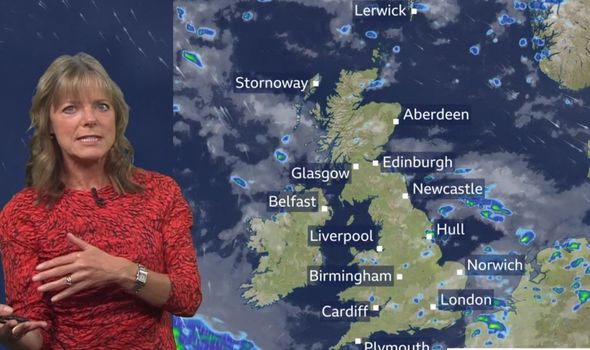 “But gusts of winds will be in excess of 50mph on exposed coasts.”

On Tuesday the UK can expect a max temperature of 21C in southern England while Scotland reaches the high teens.

For the south, there will be a lot of sunshine for Tuesday afternoon while the north of the UK can expect more heavy rain.

Ms Lear closed by saying: “In Scotland, Northern Ireland and northern England the cloud and rain will linger through the afternoon.

“It is going to be particularly pleasant at all.”