Despite thousands losing their homes, a strong community spirit has left few, if any, on the streets – for now. 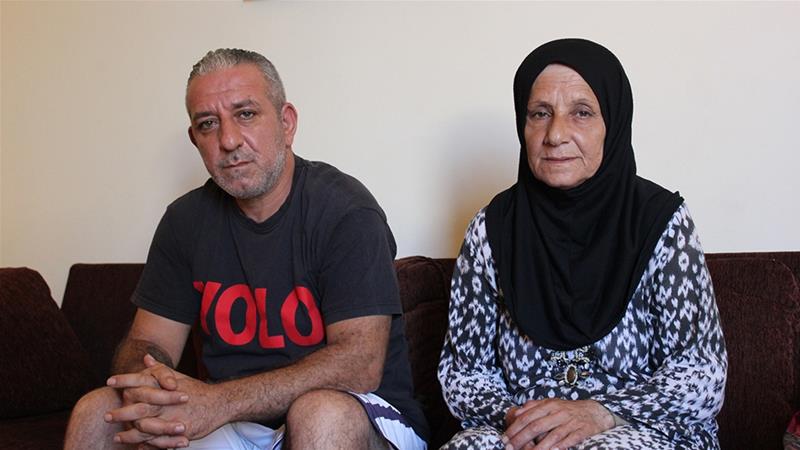 Beirut, Lebanon – Ahmad Darwish, 44, is among an estimated 300,000 people who lost their homes in Beirut port’s deadly blast on August 4.

While his building did not collapse, the explosion caused by the detonation of nearly 3,000 tonnes of ammonium nitrate at the port left a huge crack running all the way from the top floor to the bottom.

Four days after the blast, municipality employees arrived at Darwish’s four-storey building in Sin al-Fil, a neighbourhood in east Beirut, to assess the extent of the damage.

An hour later, they informed him that the building where he lives with his elderly mother, children and brothers, could collapse at any moment. Darwish and his neighbours had to evacuate immediately.

“When I asked them where I should go, they just shrugged and said ‘deal with it’,” recalled the father of three.

Darwish, who used to work as a valet parking cars, said he used to earn just enough to cover the basic cost of living before the coronavirus pandemic hit Lebanon – a country that was already crumbling under a prolonged financial crisis and soaring inflation that made basic commodities unaffordable.

But for several months, repeated lockdowns and deepening economic stagnation slashed his income in half, he said, making the idea of moving homes unfathomable.

“They think I can just relocate to another place, but I can’t,” he said, explaining if it not for a local NGO putting his family up at a hotel, he and his six dependent family members would have slept on the streets that night.

“I was already hustling to make ends meet, pay the bills, and put food on the table. For the past few months I couldn’t pay the rent,” he said. “There’s no work, no income.” 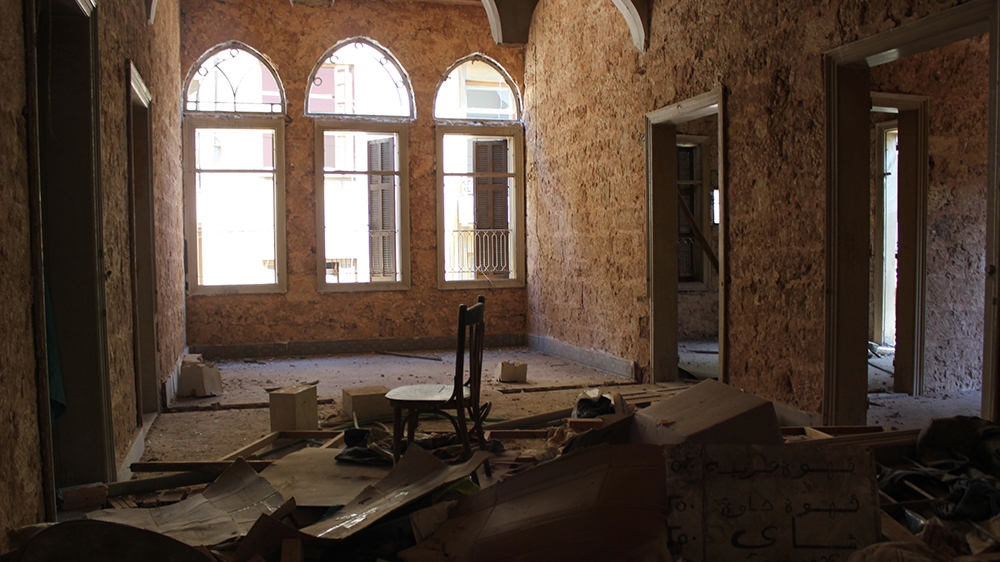 Sitting next to her son, Darwish’s 63-year-old mother, Karime Ibrahim, said although she has relatives they are too poor to support them.

“They can host us for a day, two days, even three. But the seven of us can’t live in my sister’s one-bedroom apartment which she shares with her whole family, or my nephew’s place which he can barely afford,” said Karime.

She shook her head in despair and clicked her tongue. “Can you believe, at this age, and I’m homeless.”

Even closer to the port, a group of men living at a modest hostel in the historic Gemmayze neighbourhood also faced eviction after the decades-old building they called home for years became nearly uninhabitable after the blast.

Among them was 60-year-old Mahmoud Abbas, originally from the south of Lebanon, who has worked at the hostel’s coffee shop and lived in one of its rooms for the past 20 years.

Since the explosion, municipality employees and army members warned Abbas and five other hostel residents that the building was unsafe to remain in. But the men have continued to stay there anyway.

“Unless I receive an order from the army to get out, I’m staying. I have nowhere else to go,” said the grey-haired man as he lit a cigarette and pointed out the most severely impacted parts of the hostel.

Some of the rooms had their windows blown out and doors thrown off their hinges. In others, the walls and ceilings collapsed, forming a pile of stone and broken glass on the floor.

Before the blast, Abbas’ income was about 60,000 liras [about $9] a day. But after the explosion damaged large parts of his neighbourhood and put an end to all business in the area, he is now penniless and worried about becoming homeless too. 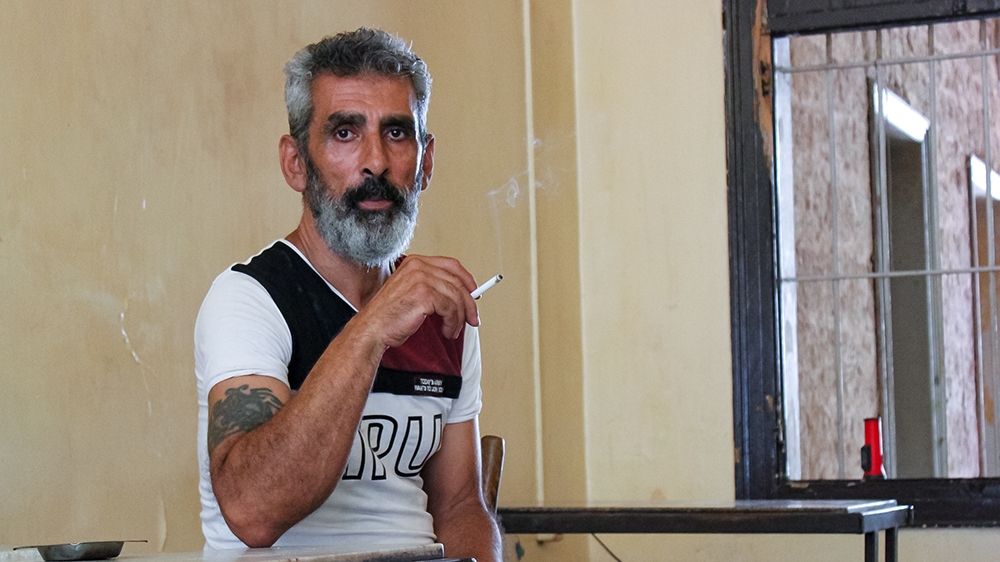 Another resident at the hostel, Mustafa Skeer, 56, who escaped the civil war in Syria by coming to Lebanon five years ago, said NGOs provided some residents on the top floors of the building with temporary accommodation.

But instead of leaving with them, Skeer preferred to stay back and to try to fix what was damaged, rather than relocate.

“This place is as humble as it gets but I’d rather stay here,” said Skeer.

“If I leave, I know I’ll be moving again and again, and again,” he said in a tired voice. “I’ve already had my fair share of displacement in Syria. I can’t do that again.”

Despite the blast leaving 200,000 severely damaged households, few, if any, people who lost their homes ended up on the streets of Beirut.

While many say the state was largely absent, local and international relief and aid organisations, along with community initiatives, filled the void, providing food, medicine and shelter – even if temporarily – for those affected.

“There has been a huge need for shelter after the blast left thousands without a safe home,” said George Katteneh, secretary-general of the Lebanese Red Cross (LRC).

Katteneh said the LRC is coordinating with UN agencies and other aid organisations, local governments, and the Lebanese army to map out housing and other needs.

“We are supporting people by providing alternative shelter through donors and international NGOs, as well as distributing in-kind donations and providing mobile clinics to help with medication, treatment and psychosocial support,” said Katteneh. 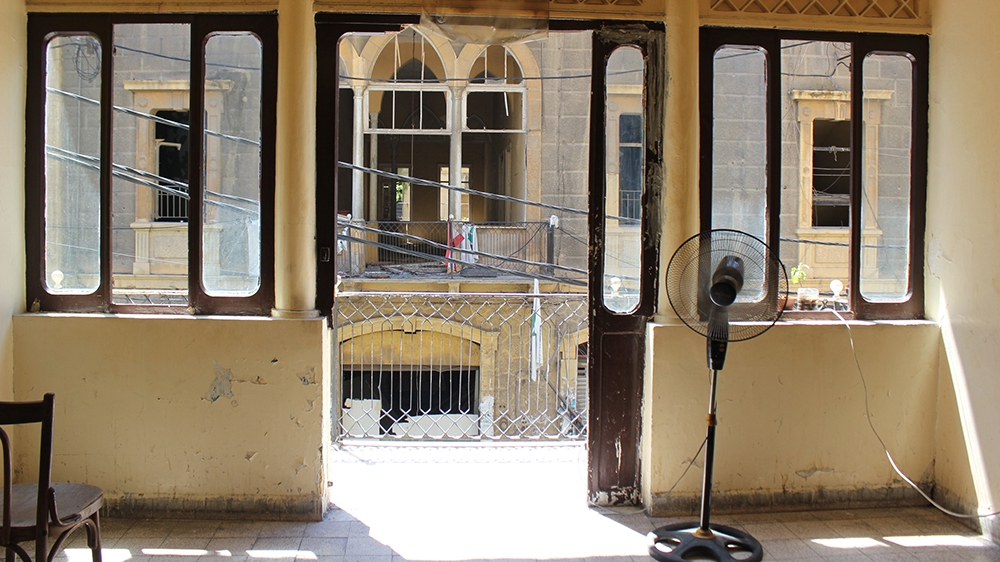 Many people also opened up their homes, not only to family and friends but to strangers too.

To help connect people, a group of 10 university students launched a unique initiative the night of the blast.

“There were plenty of people from across Lebanon who wanted to offer their homes to the victims but did not know how to get in touch with them,” said 20-year-old Sary al-Shamandry.

“So we launched this platform to make it happen,” he explained, referring to an Instagram and Facebook page called Open Houses Lebanon.

The pages have since gained thousands of followers and accumulated hundreds of posts – all of them from people offering to host victims of the blast.

“For anyone needing a home, my parents offer theirs. Furnished for a family of 4-5 in north Lebanon,” said a recent post, along with a contact phone number.

The initiative has been a huge help for many families looking for a place to sleep, and a positive example of community spirit and solidarity.

“Every day since the blast people get in touch, offering their homes to whoever needs shelter,” explained Shamandary, adding that even hotels have provided free accommodation.

While experts commended these efforts, saying they were essential as an initial response to the blast, a more sustainable plan for those who have lost their homes needs to be put in place.

“People have not been on the streets because we have traditional community and family ties, so family and friends have taken people in,” said Katteneh.

“But this is only a transitional period. A long-term plan for reconstruction has to be put in place,” he added. 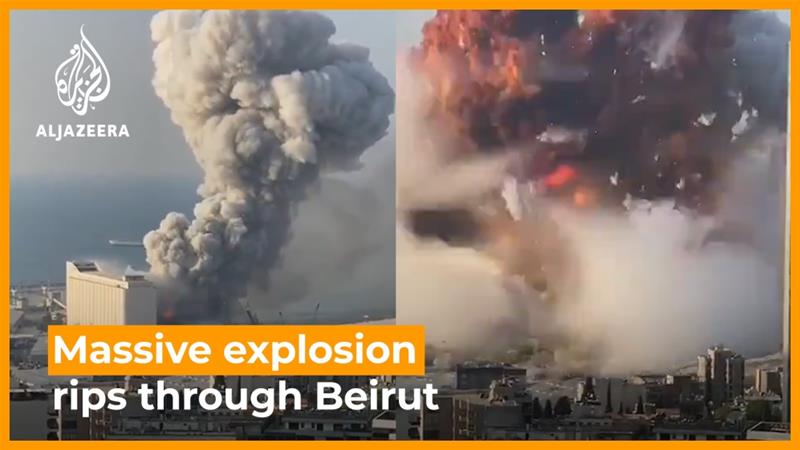