A nun, an environmental lawyer, pension fund executives, and the world’s largest asset manager. These were among the unusual collection of rebels who claimed a series of startling victories this week against some of the world’s biggest and most influential fossil fuel companies.

From Houston to The Hague, they fought their battles in shareholder meetings and courtrooms, opening surprising fronts in an accelerating effort to force the world’s coal, oil and gas companies to address their central role in the climate crisis. And even as they came with strikingly disparate points of view — corporate shareholders, children’s rights advocates, environmentalists, thousands of Dutch citizens — they delivered a common underlying message: The time to start retreating from the fossil fuel business is no longer in the future, but now.

“These companies are facing pressure from regulators, investors, and now the courts to up their game,” said Will Nichols, head of environmental research at Maplecroft, a risk analysis firm. “That’s a big chunk of society, and it’s not a great look to be pushing back against all of that.”

The most dramatic turning point came in the Netherlands, where a court instructed Royal Dutch Shell, the largest private oil trader in the world and by far the largest company in the Netherlands itself, that it must sharply cut greenhouse gas emissions from all its global operations this decade. It was the first time a court ordered a private company to, in effect, change its business practice on climate grounds.

The symbolism was inescapable: The Netherlands, famously built on land reclaimed from the sea, faces the immediate threat from a warming climate caused by the burning of Shell’s own products — oil and gas.

In another example this week, at the annual shareholder meeting of Exxon Mobil, the biggest American oil company, the message was framed sharply in terms of profits: A tiny new hedge fund led an investor rebellion to diversify away from oil and gas — or risk hurting investors and the bottom line.

Chevron’s shareholders voted to tell the company to reduce not only its own emissions, but also, remarkably, the emissions produced by customers who burn its oil and gasoline. And in Australia, a judge warned the government that a proposed coal mine expansion, a project challenged by eight teenagers and an 86-year-old nun, would need to ensure that it wouldn’t harm the health of the country’s children.

The timing was significant. This week scientists also concluded that, in the next five years, the average global temperature will at least temporarily spike beyond a dangerous threshold, climbing more than 1.5 degrees Celsius, or 2.7 degrees Fahrenheit, warmer than in pre-industrial times. Avoiding that threshold is the main objective of the Paris Accord, the landmark global climate agreement among the nations of the world to fight climate change.

Of course, none of these actions represents an immediate threat to the fossil fuel industry. For a century and a half, the global economy has been fueled by oil and coal, and that won’t change immediately.

Nevertheless, rulings like the one in the Netherlands could be a harbinger for similar legal attacks against other fossil fuel companies and their investors, experts said. Kate Raworth, an economist at Oxford University, called Shell’s loss in court “a social tipping point for a fossil-fuel-free future.”

Shell said it found the ruling, by a district court in The Hague, “disappointing” and intended to appeal. That process could take years to reach the country’s supreme court, delaying action but also drawing continued public attention. 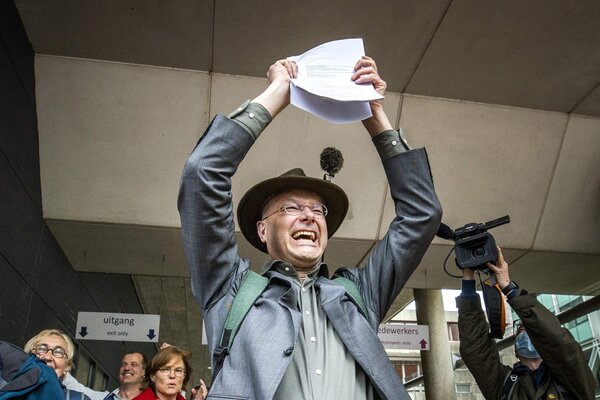 If the ruling of the lower court stands, though, analysts said, Shell would most certainly have to reorient its business to reduce oil in its portfolio and halt its growth in liquefied natural gas, in which Shell is an industry leader. That is a matter of concern for the investors who have their money in the oil and gas reserves of companies like Shell, said Patrick Parenteau, a professor at Vermont Law School. “A decision telling a company, ‘You’ve got to get out of the oil business.’ For cautious individuals within the financial community, that’s got to cause them serious concerns.”

Dangerously for Shell, the national judiciary of the Netherlands in the past has shown itself to be among the most out-front on climate litigation. In 2019, the Supreme Court of the Netherlands ordered the government to cut greenhouse gas emissions because of a lawsuit filed by Urgenda, an environmental group. It was the first case in the world to force a national government to address climate change in order to uphold its human rights commitments.

That case, too, began in a district court in The Hague, before making its way up the judicial ladder. The lawsuit against Shell marked an escalation in that strategy.

Having sued the government and won, environmental advocates decided to take on one the country’s most influential companies. The case was brought in 2019 by Milieudefensie, the Dutch branch of Friends of the Earth, as well as Greenpeace and 17,000 residents of the Netherlands. The complainants argued that the company has a legal duty to protect Dutch citizens from looming climate risks. The district court agreed.

“The consequences of this case for the fossil fuel industry will be systemic and immediate,” Tessa Khan, the lawyer who had sued the government on behalf of Urgenda, said on Twitter. She predicted that it would spur other cases and “escalate the perception of risk among investors.”

Shell had already begun to see the writing on the wall. It said earlier this year that global oil demand had likely reached a peak in 2019 and would slowly wane in the coming years.

And at least compared to some of its American peers, Shell had set relatively more ambitious climate targets. It had already promised to reduce the carbon intensity of its operations, which means that it could still continue to expand oil and production, but with lower emissions for every barrel it produced.

The district court on Wednesday instructed the company to cut its absolute emissions by 45 percent by 2030, relative to its 2019 levels. The ruling applies to Shell’s global operations. But, that said, even if it is upheld on appeal, enforcing it, say, in Nigeria, where Shell is the biggest oil producer, could prove to be “impractical,” said Biraj Borkhataria, an analyst at RBC Capital Markets, an investment bank.

“However,” he said separately, in a note to clients on Thursday, “it is another example of society asking more from oil companies.”

The Shell ruling is particularly notable because private companies have been targets of climate litigation in the United States and elsewhere, but courts have rarely ruled against them.

The Dutch case opens a potentially new front, emboldening climate advocates to pursue more cases in a wider variety of countries, particularly where national laws enshrine the right to a clean environment. Several European and Latin American courts, including in the Netherlands, have interpreted their national laws in this way.

A farmer in Peru is suing a German energy giant over the effects of global warming on a glacier in his country. About 20 American cities, counties and states have sued the fossil fuel industry since 2017, seeking damages for the local costs of climate change.

Governments are also on the hook.

Germany’s highest court recently told the government to tighten its climate targets because they did not go far enough to ensure that future generations would be protected.

In the Australian case, eight teenagers, joined by Brigid Arthur, the nun, went to court to stop the government from expanding an enormous coal mine called Whitehaven. The court on Thursday stopped short of issuing an injunction against the mine, as the plaintiffs had sought.

But in ordering the government to take “reasonable care to avoid personal injury to the children,” it recognized climate change as an “intergenerational crime,” said Michael Burger, executive director of the Sabin Center for Climate Change Law at Columbia University and a lawyer who represents several U.S. cities and states suing fossil fuel companies.

The most closely watched case in the United States, filed on behalf of young people against the United States government, seeks to establish a constitutional right to a sound environment. After recent setbacks in the federal courts, a federal judge has ordered the parties to enter settlement discussions.

The actions against Chevron and Exxon are notable because they reveal the extent to which shareholders are quickly awakening to the risk that their investments if energy companies don’t dramatically start changing their business models.

A significant chunk of shareholders demonstrated that they were increasingly distrustful that the companies could deliver the financial performance they expected without diversifying away from oil and gas.

Exxon this week lost a battle against a small new hedge fund, Engine No. 1, which rallied big investors like Blackrock and the New York state pension fund to force the company to change course. The hedge fund won at least two seats on Exxon’s 12-member board.

Tensie Whelan, director of the New York University Stern Center for Sustainable Business, called it “a pivotal moment for board accountability.” Activist shareholders have traditionally taken on company executives over financial issues, not social issues like climate change, she said. “Shareholders are deeply concerned about the financial risks posed by climate change and increasingly willing to hold the board to account,” Ms. Whelan said.