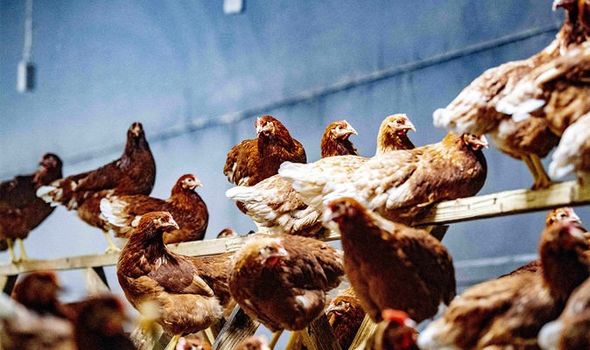 Free-range poultry will be confined to cages during the winter in France in a bid to curb avian flu outbreaks. The risk level for bird flu was raised to “high” in mainland France on Friday, due to the increase in cases near French borders.

Earlier in November, the French Agriculture Ministry said in a statement more than 100 cases of bird flu were reported.

They said: “Since the beginning of August, 130 cases or outbreaks of avian influenza have been detected in wildlife or on farms in Europe.”

They added: “In Italy, six outbreaks have been detected in broiler turkey farms in the Verona region since 19 October.

Benjamin Nauris, a farmer, decided to put his ducks in a shelter, knowing the decree would compromise the quality of his production.

“Now we are in the process of throwing everything away.

“If small producers have chosen to produce these products outdoors, it is because we love our job.”

The virus spread like wildfire in the southwest earlier this year, and was only halted by the slaughter of more than 3.5 million birds, mainly ducks.

In 2021, farmers were unable to work for the first six months, with the new measure now threatens production for the end-of-year holidays.

It comes as an outbreak of avian flu was detected in a farm near Frinton-on-Sea, Essex.

A control zone is set up temporarily covering 3km (1.8 miles) and 10km (6.2 miles) where the affected farm is based.

This news comes after an Avian Influenza Prevention Zone (AIPZ) was declared in Britain last Wednesday.

Advice for farms and bird keepers to toughen their biosecurity measures are in place as more cases of avian flu are found across the UK.

Around 500 birds are now forced into restricted access, meaning non-essential people are unable to encounter the birds.

More than a dozen swans died in Stratford-Upon-Avon, Warwickshire after they contracted bird flu.

Christianne Glossop, Chief Veterinary Officer for Wales, confirmed the presence of the H5N1 bird flu strain: “This is further evidence of the need for all keepers of poultry and captive birds to ensure they have the very highest levels of biosecurity in place.

“Public Health Wales has said the risk to the health of the public from avian influenza is very low and the Food Standards Agency has made clear it does not pose a food safety risk for UK consumers.”