Black Americans die at higher rate when police use Tasers

A review of more than 1,000 cases found the potentially fatal Taser kills more African Americans when used by police. 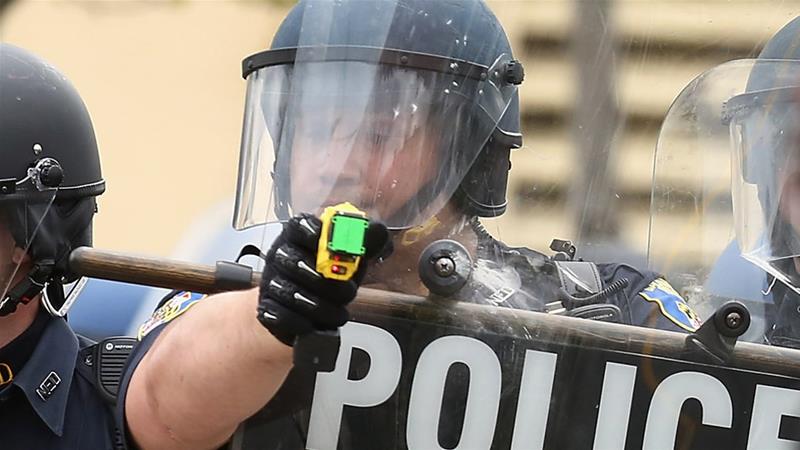 As police confront protesters across the United States, some are using a weapon that has the potential to kill: The Taser.

When those encounters have turned fatal, Black people make up a disproportionate share of those who die, according to a Reuters analysis.

Reuters documented 1,081 cases through the end of 2018 in which people died after being shocked by police with a Taser, the vast majority of them after 2000. At least 32 percent of those who died were Black, and at least 29 percent were white.

African Americans make up 14 percent of the US population, and non-Hispanic whites, 60 percent.

“These racial disparities in Taser deaths are horrifying but unsurprising,” said Carl Takei, a senior staff attorney at the American Civil Liberties Union. “Police violence is a leading cause of death for black people in America, in large part because over-policing of black and brown communities results in unnecessary police contacts and unnecessary use of force.”

In 13 percent of the deaths identified in police reports, autopsies or other records, as involving people of Hispanic ethnicity, Reuters was unable to document race. The race of the person who died was also unknown in the remaining 26 percent of the cases.

The deaths illustrate a challenge for US law enforcement at a time when protests over police killings have thrown a spotlight on their tactics.

Tasers, which deliver a pulsed electrical current meant to give police several seconds to restrain a subject, have been nearly universally embraced since the early 2000s as a less-lethal alternative to firearms. About 94 percent of the US’s roughly 18,000 police agencies now issue Tasers.

Tasers drew fresh attention over the weekend after the Friday night death of Rayshard Brooks. A police officer shot the 27-year-old with his handgun after Brooks ran away with an officer’s Taser and pointed it at police following a scuffle, the Georgia Bureau of Investigation said.

A lawyer for the Brooks family, L Chris Stewart, said Brooks’s wielding of the Taser did not justify his shooting, noting that police routinely argue in court that the devices are non-lethal weapons.

But in 2017, Reuters identified more than a thousand cases since 2000 in which people died after being shocked by police with the weapons, typically in combination with other forms of force.

Most independent researchers who have studied Tasers say deaths are rare when they are used properly. But the Reuters investigation found that many police officers are not trained properly on the risks, and the weapons are often misused.

Tasers fire a pair of barbed darts that deliver a paralyzing electrical charge or can be pressed directly against the body – the “drive stun” mode – causing intense pain.

On May 30, during nationwide protests over the death of George Floyd in Minneapolis, two college students, Taniyah Pilgrim, 20, and Messiah Young, 22, had gone out to get food and were stuck in traffic due to the demonstrations in Atlanta.

In a confrontation with police caught on bodycam video, one officer repeatedly struck the driver’s side window with a baton as a second officer stunned Pilgrim with a Taser. A third officer used a Taser on Young, as the police dragged the Black students out of the car. Young was treated in the hospital and required stitches.

Video footage of the officers shocking them drew criticism around the country. Former Atlanta Police Chief Erika Shields apologised at a news conference the next day.

“The question police should be asking is not: ‘Can I use the Taser?’ but ‘Should I?'” said Michael Leonesio, a retired police officer who ran the Oakland Police Department’s Taser program and has served as an expert witness in wrongful death lawsuits against Axon. “This is a dangerous weapon,” Leonesio said. “The more it’s used, the more people are going to die.”

Axon says its weapons are not risk-free but are safer than batons, fists, tackles and impact munitions.

“Any loss of life is a tragedy regardless of the circumstance, which is why we remain committed to developing technology and training to protect both officers and the community,” the company said in an email to Reuters.